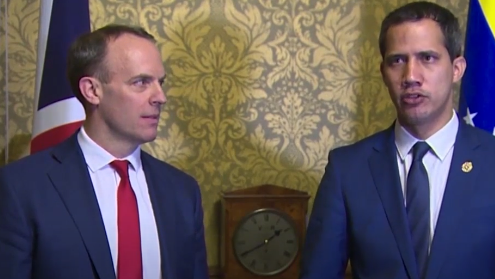 Documents obtained by The Canary under the Freedom of Information Act reveal the existence of a secretive “Venezuela Reconstruction Office” at the Foreign and Commonwealth Office. The existence of this office has not been acknowledged publicly and therefore is being kept beyond parliamentary scrutiny.

The documents relate to the visit by Juan Guaidó to the UK in January 2020. At that time, the self-proclaimed “president” of Venezuela was trying to rekindle support for his failed attempt to oust president Maduro. The attempts by Guaidó, with the full backing and encouragement of the US, to remove Maduro, had failed, one after another, during the first half of 2019. These included proclaiming himself to be the president of Venezuela at a street rally, an attempt to breach the Venezuelan border with Colombia under the guise of delivering “humanitarian aid” in February, a botched military coup in April, repeated calls for Army officers to carry out a military coup, appeals to the US to carry out a military intervention, etc.

All of these counted on the support of the British government, which was one of about 50 around the world that recognised Guaidó as president of Venezuela, even though the claim had no basis whatsoever. The fact that he was involved in a whole series of clearly illegal actions did not stop the Tory government from publicly supporting him. The UK was one of the first countries to recognise Guaidó’s charade in a statement by then-Foreign Secretary Jeremy Hunt on 24 January 2019.

To put it into some context, imagine if Jeremy Corbyn had declared the British general election as fraudulent and decided to proclaim himself as the prime minister at a rally in Trafalgar Sq. Imagine further if he then called on the army to remove Theresa May by force and appealed to France to send an expeditionary force to kick her out.

As if these actions were not outrageous enough, subsequently, Guaidó has been involved in a series of additional scandals, including the fact that his illegal crossing of the border to Colombia in February 2019 (to attend Richard Branson’s “humanitarian aid” concert) was organised by Colombian paramilitary gang “Los Rastrojos”, and that his own representatives in Colombia used money raised for “humanitarian aid” for their own personal gain, etc.

None of this stopped the UK Tory government from publicly supporting and encouraging Guaidó and his “democratic” opposition. So when in January 2020, beaten and defeated, Guaidó decided to go on a world tour to shore up support, London was top of the list of capitals he wanted to visit.

The documents obtained by The Canary shed some light into the contents of the discussions he had with UK government officials and reveal the existence of this never mentioned before “Venezuela Reconstruction Office”, headed by John Saville, the former UK ambassador to Venezuela, a position he occupied between 2014 and 2017. 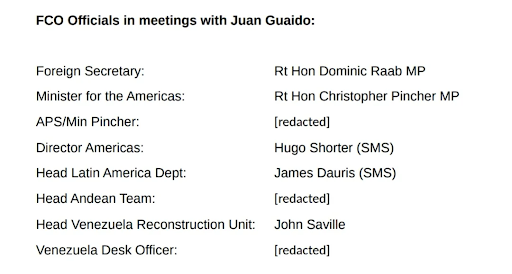 Ahead of Guaidó’s visit to London, the FCO issued a press statement re-stating Britain’s position: “The United Kingdom underlines its support for interim constitutional President Guaidó and his efforts to lead Venezuela towards a peaceful and democratic resolution of the appalling crisis the country is facing”. This is scandalous. How can Guaidó be described as the “constitutional president”! Which part of the Venezuelan constitution says that the president of the National Assembly (a body which is in contempt of court) can stand up in a street rally and declare himself president! How can Guaidós efforts be described as “peaceful and democratic”?! He was part of a coup attempt, in which he stood on a bridge surrounded by armed military men with the intention of overthrowing the government. How is that “democratic and peaceful”?

The role of the UK government in Guaidó’s visit, as revealed by the documents obtained by The Canary, was far from just receiving a foreign “president”. UK officials, including John Saville from the “Reconstruction Office”, were heavily involved in organising maximum media coverage for Guaidó during his stay: 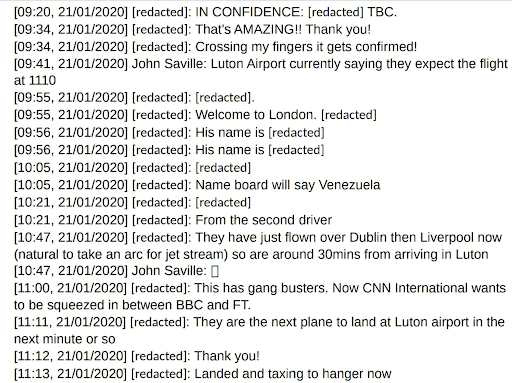 It is clear from these documents that British officials were acting as public relations officers for coup-plotting Guaidó. John Saville is currently the UK consul in Chicago, so what he was doing in London in January 2020 and how he can head a UK “Venezuela Reconstruction Office” from the US is anybody’s guess.

The documents obtained by The Canary also include correspondence between Vanessa Neumann and British officials regarding possible UK business interests in Venezuela. Vanessa Neumann is a former socialite and fantasist who has been appointed by Guaidó as his representative in the UK. She claims to be his “ambassador”, but her title has as much legitimacy as his: none. None of this stopped British officials from engaging with her and responding to her emails.

The correspondence reveals that she is on first-name terms with FCO officials when discussing having “reached out to Rory Stewart at DFID for a meeting that will… sustain British business in Venezuela’s reconstruction [emphasis added]”. This is a case of selling the bear’s skin before hunting it. Literally, Guaidó’s representative in the UK wants to sell off his country’s natural resources and business opportunities before he has even taken power! And the British government is quite pleased to go along with this charade on behalf of British companies. If you want a description of imperialism and haven’t got the time to read Lenin’s classic work on it, here you have it in a nutshell.

The people mentioned in the correspondence are Hugo Shorter, Director for the Americas at UK Foreign & Commonwealth Office (FCO), and Nigel Marcus Baker OBE MVO, currently Head of the Latin America Department at the Foreign and Commonwealth Office.

More ominously, the discussions between Neumann and FCO officials included the issue of a “new Venezuela military attaché”, though these documents have been completely redacted. Why would FCO officials discuss such sensitive matters with a private individual who represents a coup plotter? 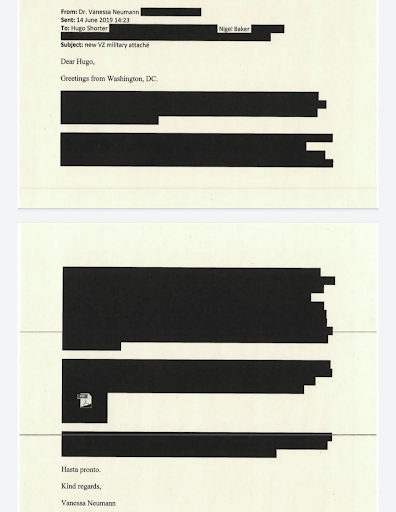 Of course, the part played by the United Kingdom in efforts to remove Venezuelan president Maduro is well known and public. The British government was one of the first to recognise Guaidó in January 2019, following the cue from Trump. The British government is part of the EU sanctions regime against Venezuela. So much so that it has already put in place legislation to make sure sanctions continue after Brexit. The UK government, responding to pressure from the US, has instructed the Bank of England to withhold gold reserves Venezuela has in its vaults.

What these documents obtained by The Canary reveal is how close, one would say even chummy, is the relationship between the UK Tory government and the coup-plotting Venezuelan opposition, and how this relationship is also related to potential British interests in the country, which has the largest proven oil reserves in the world, the world’s second gold deposits, large gas natural and coltan reserves, etc.

This example of imperialist interference in Venezuela takes place at a time when Guaidó and the “democratic opposition” have been found to be part of a mercenary plot to kidnap president Maduro and remove him from power involving US former special forces soldiers.

Venezuela has lodged a formal complaint with the UK government. Foreign Minister Jorge Arreaza told UK Charge d'Affaires to Venezuela Duncan Hill: “We demand that [the UK] abandon Washington’s coup-mongering plans and any destabilising initiative. We demand respect for our sovereignty and the purposes and principle of the UN charter.”

In fact, the Venezuelan government would now be justified in expropriating all UK properties in Venezuela, without compensation. That would be a proportionate response.

Perhaps the most scandalous aspect of these revelations is the deafening silence they have been met by the British media. Not a single article, not a single report in any of the media outlets, with the honourable exception of the Morning Star. Also noticeable is the silence of Labour leader Keir Starmer about this outrageous example of British imperialist interference in the affairs of another country.

It is the duty of socialists, anti-imperialists and all consistent democrats, to raise a hue and cry over this question. The Labour Party should lambast the government over these revelations and demand full disclosure of the role the UK government has played and is playing in illegal attempts at regime change against Venezuela.