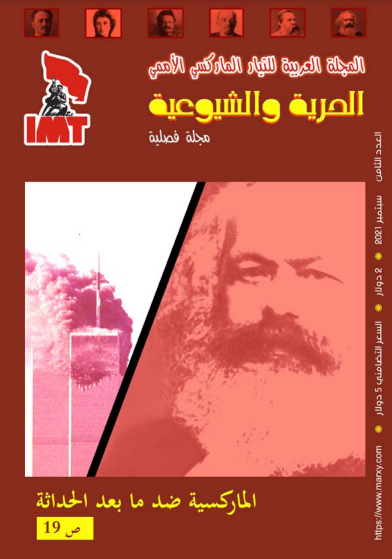 We are very proud to announce that the eighth issue of Freedom and Communism, the International Marxist Tendency’s theoretical journal in the Arabic language, is out now. This edition contains a range of articles on various subjects, including current events in the Middle East, the fight against postmodernism, and the legacy of the Paris Commune. Click here to read the full issue. We publish the editorial below, translated into English.

Immediately after the collapse of the Soviet Union 30 years ago (1991-2021), the defenders of capitalism – liberals, reformists, and their followers - engaged in a wave of jubilation, emphasising the failure of socialism, the death of Marxism, the supremacy of the ‘free’ market economy, liberal ‘democracy’, etc., where all will live in prosperity and peace in the best possible world, all under the loving care of the world’s policeman in the form of the United States of America.

But what is left of all these dreams now? Well, in a nutshell, there is not a whiff of euphoria left. The mood among capitalist theorists is pessimism and anxiety. Capitalism has entered its deepest crisis, and the world has never been more troubled than it is now. 82.4 million people are refugees due to war, famine and climate change, of whom children make up about 42 percent. Chronic hunger has risen to affect an additional 10 million people in one year and nearly 60 million in five years. In addition, there are already two billion people who do not regularly receive nutritious, sufficient and safe food. All this in light of surplus production and abundance.

The destruction of the environment has reached alarming levels. Between 2009 and 2012, Antarctica was losing about 230 billion tons of ice annually. The pace is accelerating, and there are even reports of the extinction of more than 500 species every day, including organisms that become extinct even before they are discovered! This was the warmest summer on record, and the number and spread of wildfires reached unprecedented levels. Who is to place? “Man is responsible,” say the capitalist media, certain academic studies, ‘experts’, etc. And what's the solution? To change individual, daily behaviors such as not lighting more than one lamp in your home or reducing your number of showers, etc. This is an example of the answers we usually get. But the reality is something else: the statisticians say that 71 percent of the polluting and warming gases of 100 major capital firms are really responsible: corporations, capitalists, wars, and unbridled greed for profit without any other considerations.

Humankind therefore has no choice but to eliminate this criminal system of exploitation and disorder, which does nothing but serve a minority of millionaire parasites, and build a socialist system.

In the face of anti-socialist propaganda, we say that what fell in the Soviet Union 30 years ago was neither socialism nor Marxism, but rather a Stalinist bureaucracy. This bureaucracy aborted the first attempt at building socialism, and tarnished the image of socialism in the eyes of workers and young people seeking a revolutionary alternative, as Marxists explained from the beginning.

We in the internationalist Marxist Tendency are fighting for revolutionary socialism, as Marx, Engels, Lenin and Trotsky saw it: socialism based on rational democratic planning by the producers themselves to serve the interests of the majority of society in harmony with the ecosystem.

Workers and revolutionary youth! Read and distribute our magazine. Publish Marxist thought amongst yourselves. And if you agree with our revolutionary socialist ideas and aims, we invite you to join us in this great struggle!