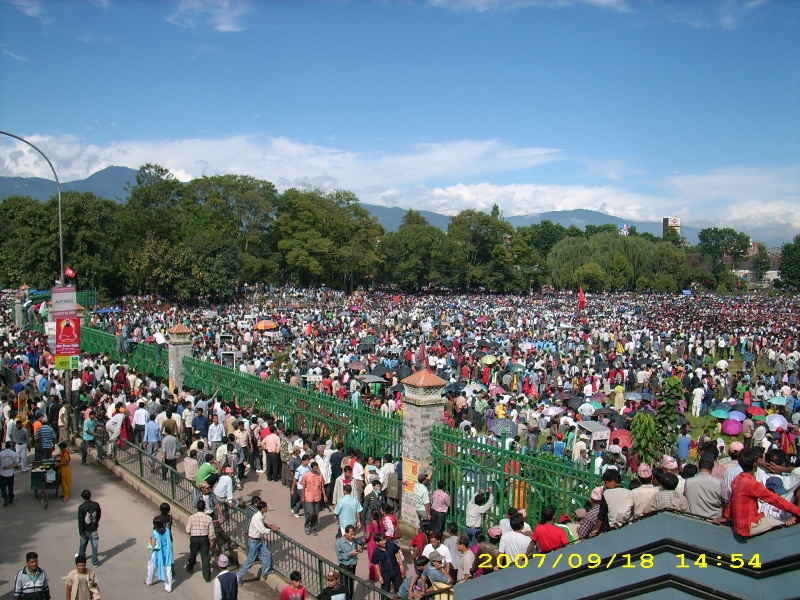 The past experiences of the Nepalese Maoists, and the failure of their attempts to carry out a revolution by “stages” has led to an internal debate in which some of its leaders have drawn the conclusion that the “national road” has not produced the desired results and that what is required is an internationalist position.

The current Nepal situation is at a standstill due to the struggle of multiple interests. The 601-member Constituent Assembly that was elected in the spring of 2008 was able to abolish the 240-year old monarchy and establish a democratic republic. However, the process of constitution making has stalled as the parliamentary parties want to maintain the status quo, whereas the Maoists want to establish a “people’s federal democratic republic” by eliminating what they call “the remnants of feudalism” and thereby, restructuring the state.

Since the Maoists abandoned the armed struggle and entered into the so called “peace process”, they have been struggling to develop a workable strategy for their party. Numerous meetings of the Central Committee, the Politburo and extended party gatherings have been organized over the past three years, but they have failed to convince their own cadres about their new strategy. In this context, the UCP(N)’s vice-president and senior party ideologue, Dr. Baburam Bhattarai, has proposed a new course for the party through a paper titled “Contemporary Marxism” published in the Raato Jhilko (The Red Spark, July 2009 – See Communist Party of Nepal recognises role of Leon Trotsky).

Comrade Bhattarai, suggested new strategic directions for his party, summarized in the following points: There is a need to develop Marxism to a new level by analyzing and synthesizing the lessons of China, Russia, Nepal, India etc., and the new initiatives being taken in some countries in Latin America.

The current crisis of capitalism and the previous era of so-called “neoliberal” development have made many, like the Maoist leader, realise that “today, the globalization of imperialist capitalism has increased many-fold as compared to the beginning of 20th century. Development of information technology has crossed national borders and transformed the world into a village. On the other hand, the inherent unequal and extreme development of capitalist imperialism has caused disparity among different nations”. This is a tentative step in explaining the theory of combined and uneven development. The Nepalese example shows that the country has a mixture of different historical formations within it (feudal, semi-capitalist, capitalist, etc).

In the past, the Nepali Maoists used to blame “revisionism” introduced by Khrushchev, Brezhnev and Deng for the failure of socialism in Russia and China, but now they have put the blame squarely on Stalinism. This is a development that we welcome and encourage.

However, Dr Bhattarai’s paper is not accepted by the Stalinist hardliners within the UCPN(M). They have argued that Leon Trotsky was “outside of the Marxist-Leninist ideological current” and his role in the proletarian revolution, as well as his commitment to Marxism, are doubtful and therefore comparing Stalin with Trotsky and drawing conclusions on that basis is subjective thinking and irrelevant.

In a recent paper, Central Committee member, comrade Kushal Pradhan wrote: “If a simultaneous wave of revolution is necessary to sustain the revolution in each country and if such a position is in line with the Marxist-Leninist-Maoist thought, then there is no point in dragging Trotsky into this debate. Secondly, the idea of revolution in a single country belongs to Lenin; and Stalin created the structure of the first socialist state. Stalin might have made some mistakes, but he was a great Marxist and Leninist practitioner and his contribution should not be underestimated”. (The Red Guard, September 2009, pp.18-20). Comrade Pradhan also argues that the idea of world revolution or Permanent Revolution belongs to Marx and not to Leon Trotsky.

The ongoing debate on the strategic directions of the UCPN(M) has clearly placed the party in a big dilemma: the Nepali Maoists are neither in a position to return to the jungle to start the second edition of the “People’s War”, nor are they able to deliver what they had promised to the people through the current “stage of peaceful development of the revolution”. In the past, the UCPN(M) had trained the party cadres exclusively on the basis of Maoism and Stalinism, but the lessons of their 10-year armed struggle have stressed the correctness of the principles of the Permanent Revolution (as synthesized by Dr Bhattarai) and refuted the Maoist-Stalinist theory of revolution, i.e. ‘revolution in one country’ and the ‘two-stage theory’.

The time has come for Marxist internationalists to give a helping hand to the Nepali Maoists to resolve the contradictions that flow from their past mistakes and help develop a workable strategy based on proletarian internationalism.