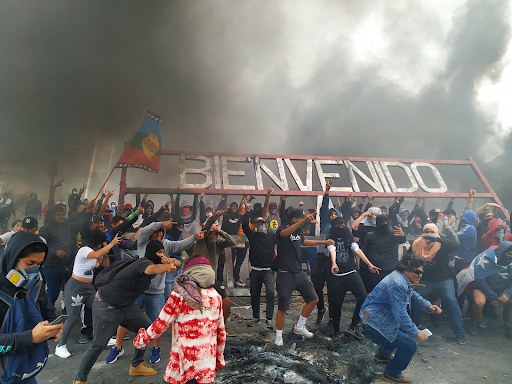 Neither brutal repression, nor torture, nor the curfew, nor fake concessions have stopped a movement that began as a secondary school students’ protest against Metro fare increases in Santiago and quickly became a national movement against the entire regime – against 30 years of cuts, increasing inequality, privatisation, attacks on the working class, deregulation, etc.

The movement, spontaneously, had already called a general strike on Monday of last week and forced the official leadership of the unions to call a two-day general strike on the 22nd and 23rd. But really the traditional leaders are overwhelmed and unable to give the movement leadership, nor to channel it. Broad expressions of self-organisation begin to emerge from below: "cabildos abiertos" (open councils) and territorial assemblies, which in some places, as in Valparaíso (where there is a militant tradition) are starting to coordinate. This is the way forward.

"Ya cayó, ya cayó" (he has fallen, he has fallen) was the rallying cry at the huge demonstration on Friday in Santiago. And that is a possible outcome. The repressive forces are overwhelmed by a people who are not intimidated. There have been cases of insubordination among the soldiers (at least one reported, in Antofagasta). The regime has few options left, and if it wants to prevent the insurrectionary outbreak from culminating in a revolutionary overthrow, it must take bold and rapid steps.

Responding quickly to the huge march on Friday, President Piñera announced the end of the state of emergency and curfew, in addition to a full cabinet reshuffle. Actually, these were just cosmetic measures aimed at swaying public opinion, to try to give the image of a government that "listens" and a "return to normalcy." None of that worked. On Sunday and Monday there were again huge demonstrations organised from below under the slogan #EstoNoHaTerminado (This is not over yet) throughout the country, and the repression continued. In a very significant way, the protesters were now marching to the buildings that represent power: in Valparaiso tens of thousands marched towards the Congress (which had to be evacuated) and in Santiago, the masses advanced towards the La Moneda palace, stopped only by heavy repression. 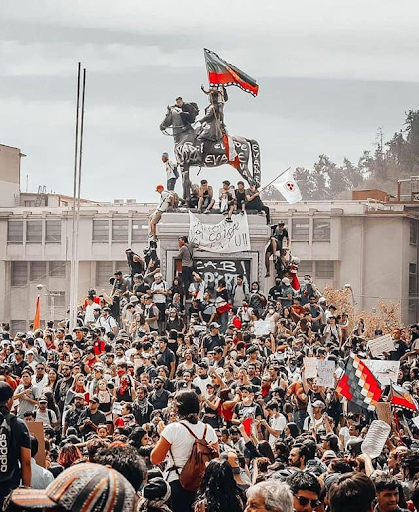 Neither brutal repression, nor torture, nor the curfew, nor fake concessions have stopped the movement in Chile / Image: fair use

Meanwhile, the union leaders and the parliamentary left have no idea what to do, and in practice they act to prevent a revolutionary overthrow. The Communist Party is apparently focusing its strategy on a political trial (impeachment) process against Piñera and Chadwick: that is, a constitutional manoeuvre, with little chance of going forward, when there is enough force on the streets to actually overthrow the government. The leaders of the Social Unity (a broad coalition of trade unions and anti-austerity campaigns) has called for a one-day general strike on Wednesday 30th, that is, a step backwards from the 48-hour strike of the previous week, at a time when the movement is already developing in a powerful way towards an indefinite stoppage, with daily marches.

All of them strive to "condemn the violence", falling into the bourgeois trap of separating the "violent vandals" from the "peaceful protesters", when in reality what we are witnessing is a single movement that has acquired insurrectional characteristics. Of course, revolutionary Marxists are not in favour of random destruction of property as a strategy. But in no way can we place ourselves on the same side as the bourgeois government that demands a condemnation of violence, while using the most brutal repression against the movement. The most effective way to avoid violence (in the first place that of state forces) is to give the movement an organised and democratic character, including the organisation of workers' self-defence. Some steps have already been taken in this direction, such as the formation of the Emergency and Protection Committee created at the initiative of education workers in Antofagasta.

Under these conditions, the bourgeoisie can try to find a replacement and sacrifice some pieces. The government reshuffle has not served to calm down the streets. It is possible they will try some kind of initiative involving the leaders of the Socialist Party, the Communist Party, the Broad Front and the unions. The Financial Times, an organ of the British imperialist bourgeoisie, demanded substantial and expensive concessions and a new cabinet, while maintaining the president. But that was on 22 October: today, those measures may be insufficient. They will have to sacrifice Piñera.

It is not even ruled out, depending on how far the movement goes, that there will be the convening of some kind of limited Constituent Assembly, organised from above and promised for some future time, to try to deactivate the movement. Socialist and Communist politicians, with the support of some right-wing leaders, are already talking about a "constitutional plebiscite" to be held within a few months. The trap is being laid.

The popular, insurrectionary, working-class and youth uprising involves very broad layers of society, reflecting a decades-long accumulation of anger. The movement knows what it doesn't want. It doesn’t want Piñera – enough is enough. But it does not have a very clear idea of what it does want, and it lacks a leadership with authority to lead it forward. Inevitably, having reached a certain point, fatigue will begin to make a dent.

The Social Unity organisations speak of a Constituent Assembly "to change the economic model." It is true that Chile has a Constitution with many anti-democratic elements that were cooked up jointly with Pinochet. But it is no less true that a change of Constitution in and of itself is no guarantee at all that anything will change. A Constitution can contain very nice words about the right to healthcare, education, housing, etc. But the capitalist system in crisis is not in a position to guarantee that this is put into practice.

What is required is not to "change the model", but to abolish capitalism, of which that model is but an expression. What is required is a programme of renationalisation of the AFPs (private pensions), copper, water, health care, the nationalisation of large companies and monopolies so that all the wealth of the country, which is created by the working class, can be democratically planned to meet the needs of the majority (healthcare, education, transportation, housing) and not the privileges of a small minority. That will not be achieved through a Constituent Assembly which, after all, is just another bourgeois parliament. In the minds of the masses, the Constituent Assembly represents the idea of a deep and fundamental change. In the calculation of the reformists and sectors of the bourgeoisie, it represents an attempt to channel the movement through the secure channels of bourgeois parliamentarism.

The working people on the street are already setting up their own organisations of power. It is necessary to coordinate the cabildos abiertos and territorial assemblies, through elected delegates, into a large, National Assembly of the Working People, which should raise the question of the seizure of power, political and economic, to solve the pressing needs of the masses that are behind this tremendous insurrectional outbreak.