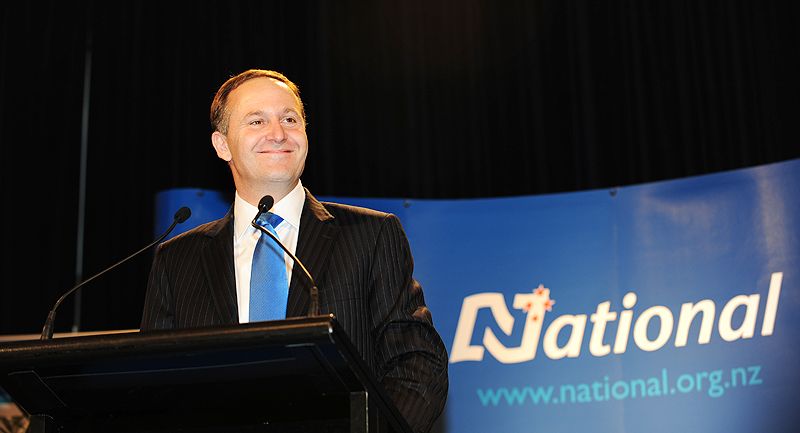 A taste of what may come in other countries is being provided by the conservative National Party government of New Zealand. It includes “fire at will” legislation and stringent tax increases. Workers have been protesting, but the unions must use all their muscle and prepare for a general strike, if they seriously want to stop these attacks.

On Sunday, 18th July 2010 approximately 300 trade unionists protested outside the (conservative) National Party Conference held in Auckland over the weekend in protest against the attacks on union and workers’ rights since National took power after the November 2008 elections.

This blitzkrieg against workers first began with the passing of the 90 Day "Fire At Will" law under Parliamentary urgency which enables bosses whose businesses have fewer than twenty workers to dismiss staff for any reason within the first ninety days of employment. Such workers have no right to seek personal grievance claims. This has enabled bosses to subject workers to numerous abuses without being challenged as workers who dare to complain are threatened with dismissal. Such workers are then subjected to a thirteen week stand-down by Work and Income when they apply for the unemployment benefit because they were dismissed. Under orders from the head office of the Ministry of Social Development the benefit applicant is automatically regarded as a liar if there is a contradiction between what the benefit applicant and their ex-employer state.

Within the last week the government has announced proposals for a series of anti-worker changes to current employment legislation including:

These attacks come on top of a planned increase in GST [Goods and Services Tax] from 12.5% to 15%, ACC [Accident Compensation Corporation] levy increases and power price hikes which will impact upon workers the hardest as their wages are already inadequate to meet their basic needs, a fact shown by the brute reality that as many as one million New Zealanders are reliant on at least one form of assistance offered through the Working for Families package to supplement their income.

Alhough it is commendable that the Council of Trade Unions has organised protests against these attacks against the working class, it is disappointing that this condemnation has been muted, especially at a time when workers have come under assault from many different directions from the ruling elite that runs New Zealand.

The Council of Trade Unions and non-aligned trade unions need to take a more proactive stance in challenging these unprecedented attacks on the working class. Even from a reformist perspective the blitzkrieg being unleashed upon the working class is not only setting this country’s industrial relations back to the level they were at the time of the Great Depression in the early 1930s but they also breach international conventions.

Article 20(1) of the Universal Declaration of Human Rights states: "Everyone has the right to freedom of peaceful assembly and association."

Article 24 states: "Everyone has the right to rest and leisure, including reasonable limitation of working hours and periodic holidays with pay."

Article 25(1) states: "Everyone has the right to a standard of living adequate for the health and well-being of himself and of his family, including food, clothing, housing and medical care…."

As has been clearly seen the 90-day hire and fire law, proposals to ban trade unions from the work place, increases in GST and ACC levies and proposed changes in basic annual leave provisions are a clear breach of international law and must be opposed. Merely organising a protest outside a Party Conference is not going to achieve anything more than to provide a news story on a slow news day.

In the short term the very minimum the trade union leadership must do is to call and organise for a 24 hour General Strike. What these attacks by the Nats show is that the hard won reforms of the past are no longer affordable by the capitalism system. If the capitalist system cannot afford the basic human dignities for all then it has to go.

In the final analysis only the socialist transformation of society can guarantee these basic human rights, here in New Zealand and internationally. That's why it is necessary to nationalise the multinationals, and banks with compensation based upon proven need, so that all the wealth created can be democratically managed by workers and society run in the interests of working people.