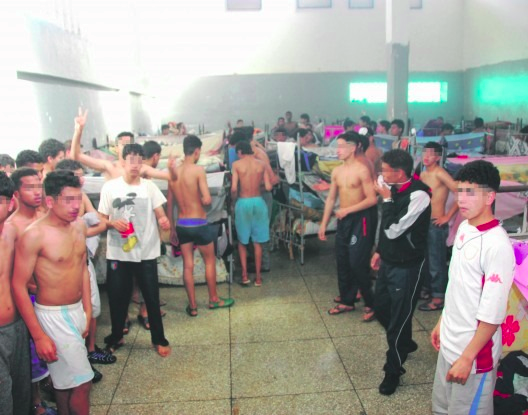 The Moroccan regime has detained over 500 political prisoners, according to the president of the Moroccan Association for Human Rights, Aziz Ghali. Amongst them are those imprisoned in the Hirak Rif protests and the Gerak Jaradah movement: trade unionists, bloggers, a journalist… pretty much everybody. Not a day goes by without social media reporting the arrest of new militants or ordinary citizens whose only crime, in the majority of cases, is having published a Facebook post critical of living conditions or of the state’s politics.

As the government considers the judicial arsenal at its disposal to be insufficient, it wants to take advantage of the conditions of quarantine to pass the new Law 20-22. This law imposes a sentence of imprisonment from six months to three years (and/or a fine of 5,000-50,000 dirhams) for anyone who would dare to publish an appeal to boycott a consumer product, or “spreading false information that could make people doubt the quality or security of any product” on social media. Additionally, a similar sanction for “incentivising the public to withdraw massive amounts of money from credible institutions and assimilated organisations”. This is a response to the success of a mass boycott against monopolistic enterprises (milk, fuel, mineral water, etc.) and against banks, which belong to the royal family and its entourage.

It is no coincidence that the United Nations designated Morocco as one of the first countries to use the pandemic to impose repressive laws.

This is the true face of the "modern democratic regime" that the mercenaries in the West, journalists, thinkers and academics, praise in exchange for the millions they receive and the steamy nights that the regime organises for them in brothels in Marrakech and others centres of sex tourism, whose menus of which often the flesh of minor children.

The Moroccan prisons, a history of horror

Lenin described the state as a “body of armed men”, but we are certain that if he had studied the Moroccan state he would have instead talked of a body of bandits, criminals and gangsters that control nearly 40 million people by the baton, the bullet and the prison cell. 60 years after so-called “independence”, the Moroccan Ministry of Education only recognizes 12 universities, the Ministry of Culture only recognises 40 cultural spaces, and the Ministry of Health recognises only five university hospitals and nine oncology centers. Despite this, the penitentiary administration has 82 penitary establishments and the chief of the administration has recently boasted to the people about the construction of new prisons and the extension of others. The Ministers of Education or Culture have not made similar declarations, because the universities and the theatres evidently do not represent independence to the regime. 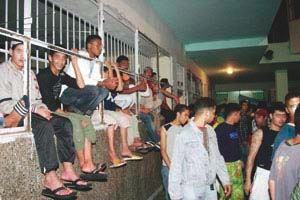 Moroccan prisons have a terrible reputation and bad treatment, torture, and famine are daily practices. The prison guards see these as an integral part of their work, because the prison, for the Moroccan state, is an institution of destruction and vengeance.

There are more than 80,000 detainees currently stuck in conditions of appalling overpopulation in prison. The occupancy rate of prisons has surpassed 300 percent. The authorities themselves admit that 44 percent of penitary establishments have a problem with “significant overpopulation” and they confirm that the average space allocated to each detainee is 1.8 square meters or less.

How can these wretched prisoners possibly practice “social isolation”, “hygiene” and “quarantine”? This is impossible and renders them extremely vulnerable to physical and mental illness. The prisons have become an epicentre of the propagation of coronavirus that now infects both the prisoners and employees. In this context, the administration had to admit 318 cases of coronavirus, a number that even the most optimistic would consider too low.

The political prisoners are in danger

The conditions in which political prisoners live are even worse however. The regime is not content with simply imprisoning them, it wants to break them physically and psychologically. By repressing these political prisoners, the regime intends to extinguish the flame of resistance in society. In this context, Nasser Zafzafi, the figurehead of the Hirak Rif protests, succeeded in smuggling an audio message to the outside world, in which he denounced the brutal practices against him and his comrades: notably torture, rape and solitary confinment. The state reacted by increasing the attacks against them and splitting them into multiple prisons. Zafzafi and many of his comrades had been forced to go on a month-long hunger strike, nearly resulting in their deaths. 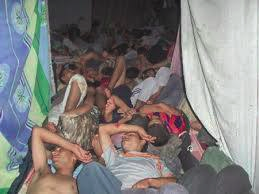 Conditions for political prisoners are especially bad / Image: fair use

The tenacity of the political prisoners has frustrated the repressive system. It is afraid of them and the popular sympathy they arouse, and considers their submission to be a matter of life and death for the regime. The regime wants them to apologise and deny the political programme they defended. It wants to be able to publicly present these leaders, symbols and spokespersons of the masses by saying: “This is the fate of those who challenge me, there is no hope in struggle, I am omnipotent.”

After sentencing the leaders of the Rif movement to many years in prison (up to 20 years), the regime now sentences them to death by COVID-19, leaving their fate in the hands of the virus. This has created a widespread rage in society and led to the launch of social media solidarity campaigns, calling for their immediate release. The movement has begun to take on gigantic proportions, despite the quarantine.

At that time, the liberals wanted to ride the wave and make sure that the movement was channeled in ways that preserved the system. In this context, a group of political figures, academics, media types, etc., published the “call of hope” in which they asked “His Majesty", with humility and love, to deliver mercy to the prisoners due to the pandemic, and “to establish better social cohesion” and “to increase our confidence and our hope in the future”.

What was “His Majesty's” response? Well, I did not want to approach this issue out of respect for the feelings of these ladies and gentlemen, but because you have asked, here is the answer. He spat in their faces, treating them with the contempt they deserve. To add salt to their wounds, “His Majesty” granted a pardon to 5,654 detainees, among them not a single political prisoner, but 40 Islamists who were detained for terrorist activities, as well as a parliamentary representive and a president of a commune (arrested for their involvement in corruption cases in the amount of millions), and a group of dangerous criminals, including at least 3 convicted of murder and others of assault and armed robberies.

The regime is terrified

Contrary to appearances, this is not a mark of self-confidence on the part of the regime, but rather an expression of its extreme terror. The regime knows very well that it is entering a period of greater revolt than all those experienced so far. It knows that all the factors that led to the start of the revolutionary movement 10 years ago still exist, and have even worsened a hundredfold; it knows it is sitting on a mountain of gunpowder. This terrifies the regime and forces it to rush to extinguish anything that could be a spark, which might ignite the situation. It has also been forced to do everything in its power to prevent the emergence of any point of reference, be it a young leader, a “stubborn” journalist, or a popular rapper…

However, this is an impossible task. Objective conditions make the emergence of expressions of accumulated anger inevitable. The current economic crisis is the worst in decades and continues to worsen. Unemployment, the cost of living, and poverty have reached unprecedented levels. There is massive discontent bubbling beneath the surface, and this discontent will be expressed through different forms, people and groups. No oppression or prison can stop this inevitable process. 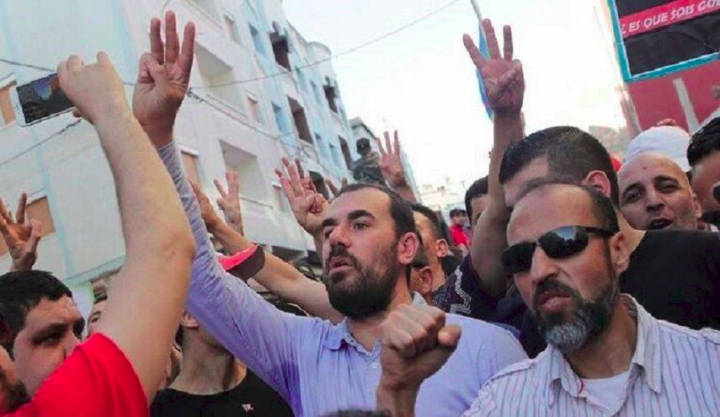 The regime is rightly fearful of the strength of the masses. Its repressive actions are signs of weakness, not strength / Image: fair use

The strength of the political prisoners and their rejection of all offers of capitulation, are examples of struggle and resistance, and a source of inspiration for the new generation of leaders who will emerge naturally from the mass movement. The quarantine will end and workers will return to their workplaces, young people to their schools and universities, and protesters in towns and villages will go out to continue the fight. They will come out with more fighting spirit and resolve, against austerity, unemployment, repression, and of course, for the release of political prisoners.

Let's give this fight the programme and the leadership it deserves

There are several lessons to be learned from the struggle for the release of political prisoners in Morocco.

This is the perspective for which Marxists are fighting! If you agree with us, join us to build a revolutionary leadership capable of implementing it!