The mine is located in the region of Bouazar at a distance of about 34 km from Taznakht. Cobalt is extracted as well as several secondary metals including gold. The company exploiting the mine is the Compagnie de Tifnout Tiranimine (CTT), a subsidiary of ONA. 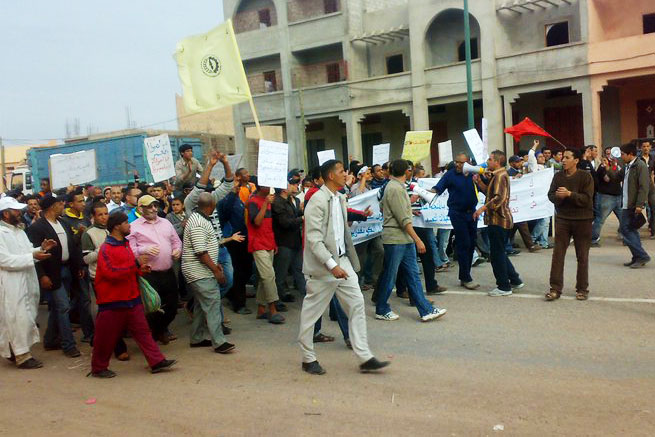 1,200 miners are working under conditions akin to slavery, more than six hundred meters below the surface without any safeguards against the risk of landslides. Each year at least one miner dies because of the many industrial accidents, landslides and electric shocks. The management’s answer these fatal accidents with complete denial. They are not afraid to manufacture a certificate confirming that the worker died of heart failure, and therefore deny all responsibilities associated with the rights of workers. Despite the high-risk nature of this work the miners do not benefit from any risk compensation. They do not see any improvement in working conditions. The company continues to ruthlessly pursue profit at the expense of workers lives.

Silicosis, a typical mine disease, is also plaguing many workers as they work without any protection and with the complicity of the doctor appointed by the administration. When the disease appears the company reject their responsibility and refuse to bear the costs of treatment. The ill worker is then assigned work at the surface. When his disease develops further he is then no longer desirable in the mine and is thrown into the street without any compensation. He is also expected not to protest or make any noise about his dismissal. The effect of this poison in the lungs of the miners is also dangerous for the population of douars (villages) surrounding it. The health of children and the population generally is affected, in the absence of full medical care.

The devastation caused by careless exploitation of the cobalt mine goes further. The necessities of life in the surrounding area are also affected.  The mine needs vast water resources which they take without charge, polluting the  ground water and  causing many villages to struggle with a lack of water for drinking, cleaning and land irrigation.

Despite all the billions of Dirhams produced by the workers they are paid daily wages of misery. The areas they live in are denied any serious infrastructure. Marginalization is severe and absolute. The wealth produced by the workers disappears in the pockets of the owners of the mine and some mercenaries in the administration and "elected" councilors, who receive bribes in return for their silence.

In the face of all of these conditions and this shameless exploitation, the workers have engaged in heroic struggles despite opposition from the trade union leaders of the UMT. They decided to organize and to struggle. The miners started a strike for two hours on Friday, April 22, and a strike for a full day on Saturday, April 23. As the role of the trade union leaders of the UMT was exposed the workers decided to set up a new union in order to unify their ranks and to fight for their right to work in decent conditions. The workers have joined the National Union of Energy and Minerals of the CDT.

Once the foundation of the union was announced the mine bosses decided to go on a rampage against the new union officers. A campaign of repression started combined with attempts to corrupt the leaders, attempting to bribe them but in vain. Even one of the members of the Teachers union involved in the organizing effort was approached and intimidated. The management then decided to relocate the union activists to new jobs at distant places in the mine so to separate them from the bulk of the workforce. Others were arrested by the police and stopped from entering the mine. However, the workers reacted strongly and stayed united. Instead of intimidating the workers more miners started to join the union and strengthen it.

In the face of repeated provocations, workers and a number of trade union activists staged a protest outside the headquarters of the Democratic Confederation of Labor on the 8th of May. They also organised a sit-in in front of the headquarters of the gendarmerie. This was in protest against the involvement of the police in the arrest of trade union leaders on the bus to work and their attacks on trade union freedoms. This action was a resounding success. The police retreated from direct intervention in the labor conflict and the intimidation of the workers.

Subsequently, the workers went on  strike for 48 hours on Monday and Tuesday, 16/17th May 2011, and organized a march on Sunday 15th of May together with members of the local branch of the CDT, other activists and the general population. Many young people and women were also present.

However, the management continued to intimidate the workers. They tried to make to workers to sign a letter recognizing their absence from work without justification and without permission from the managers. But the workers refused to sign such nonsense and clung to their right to trade union activity and strikes, prompting the management to prevent them from continuing to work.

This  escalation forced the local branch of the miners of Taznakht of the National Union of Energy and Minerals with support of the regional branch of the CDT of Ouarzazate to launch a new strike for 72 hours starting on Friday, 20 May 2011, from seven o'clock am on Monday, 23 May 2011 at seven o'clock in the morning. They will organize and protest also at  the mine management Bouazar on Sunday, 22 May 2011 at 10:30 am.

The miners of Bouazar  need your solidarity.

To the Ministry of Energy and Minerals:

Please send a copy of that protest messages, faxes and messages of solidarity to the site to contact@marxy.com