Pakistan
Share
Tweet
Over the past week, February 11-18, the Jammu Kashmir National Students’ Federation (Marxist) participated in a massive mobilization of youth and students. Over the course of the week hundreds of students and youth poured into the streets under the banner of Marxist internationalism across all eight districts of Kashmir. 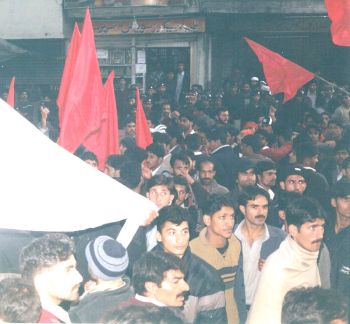 Over the past week, February 11-18, the Jammu Kashmir National Students’ Federation (Marxist) participated in a massive mobilization of youth and students. Over the course of the week hundreds of students and youth poured into the streets under the banner of Marxist internationalism across all eight districts of Kashmir. More than 30 meetings, rallies, and demonstrations were held throughout the week across Kashmir as well as in parts of Pakistan. Unfortunately, due to the collapse of infrastructure in Kashmir as a result of last year’s devastating earthquake, we could not collect detailed reports or photos of all the activities that took place.

According to the reports we received over the telephone, all the activities organized in the memory of the martyr Maqbool Butt were different this time around than in the past. Many workers and small shopkeepers also participated in the mobilization. The practical demands of the people in the areas affected by the quake played a big part in the mobilizations. Thus, the mobilizations allowed many people for the first time to express their anger at the state’s failure in the post-earthquake rehabilitation work.

The activities of the week were organized in the following cities and towns: Rawlakot, Datot, Khaigala, Tetrinot, Tatta Pani, Kotli, Mirpur, Bagh, Rawalpindi, and Lahore.

The last event of the week of mobilizations was held in Muzafferabad on February 18. 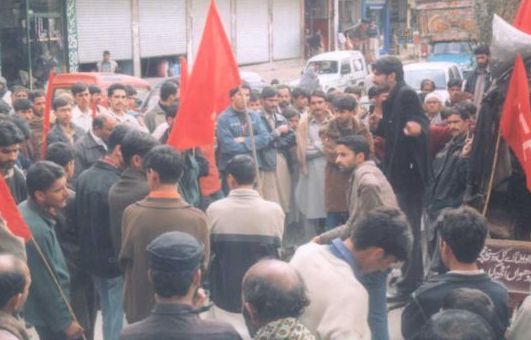 The meeting, which was widely covered in the press, was organized to expose the failure of both the state and the reactionary nationalists in Kashmir to solve the problems of the Kashmiri people. The comrades produced a poster for the meeting and pasted it in cities all across Kashmir. In Muzafferabad, the comrades launched a massive campaign to involve all political groups, especially student and worker groups, to discuss the problems faced by the survivors of the earthquake. Students and workers responded overwhelming and warmly, as they had been waiting a long time for such an opportunity.

The role of the state and the nationalists

The rising influence of the comrades in Kashmir forced the state to intervene and attempt to sabotage our activities. The district administrator, Zahid Ameen Chaudhary, used the nationalist faction of the JKNSF for this purpose. Together they prepared a series of manoeuvres against the JKNSF (Marxist). With the support of the state, the nationalist faction of the JKNSF announced that a conference would be held on February 18 in Muzafferabad - at the very same venue where the JKNSF (Marxist) was also going to hold an event on February 18, announced only two days earlier.

The JKNSF (Marxist) had announced its public meeting at the venue almost two weeks ago. It is a tradition in Kashmir that different organizations use meeting halls and venues with mutual understanding and respect. If any organization announces a meeting it is the right of that organization to use that place free from interference and outside control. Such venues have always been regarded as public property and there has never been any need of official approval to use such places for any political activity. It was always more than enough to simply know that on the day of a political event, no other political group should hold an event at the same location. However, last week, for the first time in decades, the state used its authority and power to sabotage the activities of the Marxists.

The state issued a letter of approval to the nationalist faction of the JKNSF allowing them to hold their meeting at the venue. This was clearly a provocation. Not only did the state give the nationalists the right to use the hall when the Marxists had already called a meeting for the venue, but then launched a dirty smear campaign, claiming that there was the possibility of a clash between the two factions of the JKNSF. This was done to drive people away with the threat of violence and prevent people from participating in the public meeting called by the Marxists.

There was a burning feeling of resentment and anger amongst the young members of the JKNSF (Marxist). However, the comrades called an emergency meeting and decided to change the venue to the University campus just five hundred meters away.

Despite all the efforts of the state/nationalist coalition, and the weather (it rained very heavily that day), the comrades held a successful public meeting. Despite the state’s smear campaign, some 800 people turned up for the meeting of the JKNSF (Marxist). 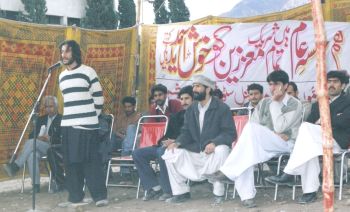 Due to various complications and problems the public meeting started two hours late. However, the participants patiently waited until the meeting began. Comrade Adil chaired the meeting and was presided over by the former president of the JKNSF (Marxist), Comrade Shujat Kazmi. Among the speakers at the meeting were Abid Chugtai, Tufeeq Kazmi, Waseem, Iftikhar, Abid Hussein, Shoaib Sham and Amjad Shahswar. 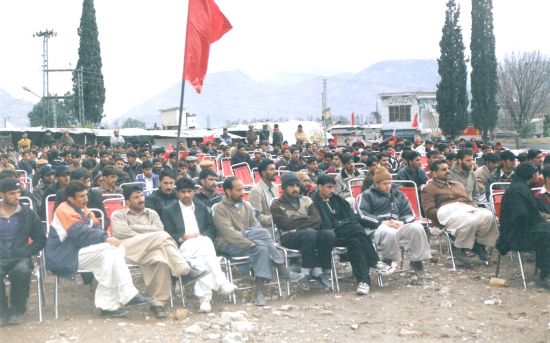 All the speakers took the opportunity to criticize the failure of the state in the aftermath of the earthquake and called upon the masses and youth to rise up in struggle and to take their destinies into their own hands. The speakers also took the opportunity to expose and condemn the hypocritical alliance of the nationalists and the state. After the meeting the participants held a rally and marched from the campus to Geelani Chowk. Many of the demonstrators chanted slogans such as “We demand bread, cloth, and shelter”, “No to religious war, no to national war – class war, class war!” 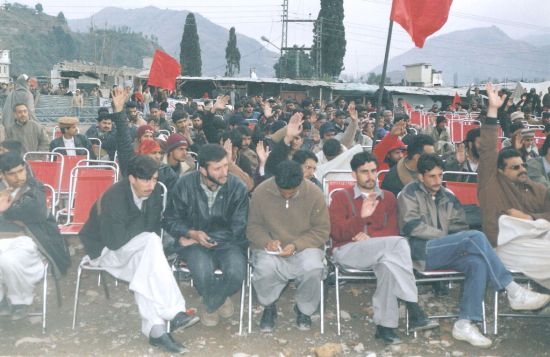 At the end of the rally an organizational meeting of the JKNSF (Marxist) was held. A press conference was held the next day and the following decisions were announced to the press:

This step represents a complete break from the rotten and reactionary nationalists of the JKNSF. The decision to form a transitional body to prepare for a new convention was the demand of the rank and file members of the JKNSF (Marxist). Many JKNSF members who had fallen into inactivity suddenly sprang to life again. They had been anxiously waiting for a break with the nationalists.

Despite the clear break with the nationalists, there is the possibility of a temporary re-unification of JKNSF. This will depend upon the response of the official leadership of the JKNSF. If the official leadership of JKNSF dissolves its executive committee and calls a new convention, then the Marxist faction of the JKNSF will attend that convention. But as we reported earlier, the official leadership of JKNSF have lost their base of support and fear calling a new convention, because they know they will lose. Now all of their efforts are directed only at sabotaging the organization. But the Marxists can be confident that the strength and influence of Marxists ideas run so deep in the JKNSF that no force can defeat them.