Details
our correspondent in Paris
04 April 2006

France
Share
Tweet
A massive demonstration marched through the streets of Paris today, April 4, on the national day of action against the hated First Employment Contract introduced by the right-wing government of de Villepin. According to the CGT, more than 700,000 people participated in the demonstration, making it bigger than the one on March 28. 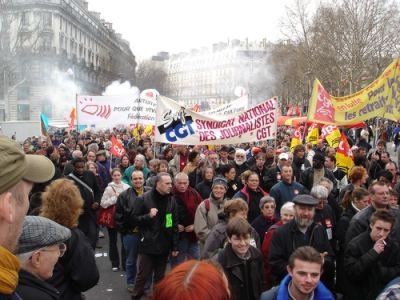 A massive demonstration marched through the streets of Paris today, April 4, on the national day of action against the hated First Employment Contract introduced by the right-wing government of de Villepin. According to the CGT, more than 700,000 people participated in the demonstration, making it bigger than the one on March 28.

The first figures arriving also show that the demonstrations were bigger in the provinces as well. Thus in Bordeaux 125,000 marched, 90,000 in Toulouse, 45,000 in Lyon, 60,000 in Nantes and in Grenoble, 50,000 at Clermont-Ferrand, 35,000 in Saint-Etienne, 30,000 in Brest, 30,000 in Roanne, 20,000 in Tours, 20,000 in Orléans, etc. The provisional total for the whole of France advanced by the CGT was already more than 3 million, surpassing the 3 million of last Tuesday. As for the level of strikes, the CGT recognised that the level of participation was slightly lower in the public sector, but that there had been more participation in the private sector. One has to take into account that this is the 5th such day of action called by the union leaders, who have not yet dared call a proper 24-hour general strike, and this introduces an element of tiredness. Also some of the more moderate unions, like CFDT, did not call for strike action in some of the sectors they had called out last Tuesday. There will be, inevitably, a war of statements regarding the figures between the organisers and the government, with the government trying to give the impression that the movement is weaker. 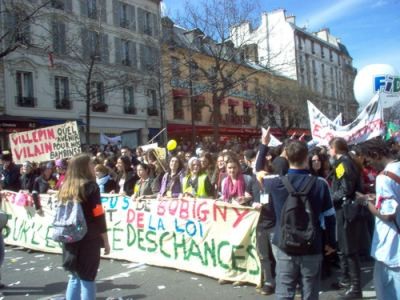 Whatever the figures, the demonstration in Paris was really impressive. At 1:30 pm, one full hour before it was supposed to start, Place de la Republique was already full, and thousands gathered in front of the official head of the demonstration on the route towards the Place d'Italie. First in the march where the university and school students, but there were so many of them that the march could not leave the Place de la Republique until at least 3:30 pm and the final contingents could only leave the square at about 6:30 pm, some four hours after the head had started to move. It was impressive to see the amount of youth, including many black and Arab students, taking the lead in the different contingents.

After the school and university students organised by individual university and high school, with each one protected by its own stewards, came the contingent of the Federation of Parents of School Students which has been supportive of the movement since the beginning and has criticised the crude attempts of Education Minister de Robien to use the police to open the blockaded high schools. The Teachers’ federation, the FSU, followed closely and in great numbers.

After that the different trade unions marched through. The largest and most impressive contingent by far was that of the CGT. Amongst them were the tube and train workers (with their characteristic red flares), the Citroen workers, workers of Air France, health workers, the metal workers’ federation, and many others.

The mood on the demonstration was extremely militant and very angry. However, at the same time there was a certain sense of anticipation. You could see how many felt that if this day of action were even bigger than the massive show of strength on March 28, then the government would be forced to withdraw the CPE. 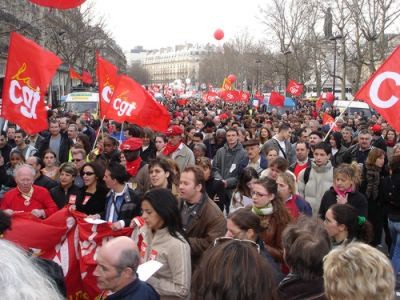 This feeling was also the result of the very open splits between Prime Minister de Villepin and Interior Minister Sarkozy. In fact, from the point of view of the ruling class it might be wiser to just withdraw the CPE and replace de Villepin with Sarkozy, in order to avoid the movement from becoming an all out general strike.

The appeal of the national coordination of students and school students which met in Lille at the weekend was quite clear on this point and also proposed a number of concrete measures to build for an all out general strike. At least two inter-union bodies (local and regional coordination bodies made up of the different unions and the student representatives) have called for a renewable general strike in Loire-Atlantique and Gironda.

At the same time that the movement is becoming more radicalised, and a wider layer of workers and students are drawing the conclusion that only a general strike can defeat the CPE, some of the trade union and student leaders are making statements favourable to negotiation. This is the case with the CFDT and the UNEF, which previously said that the withdrawal of the CPE was a precondition for any talks. They are now saying they are prepared to sit down with the right wing to talk about anything as long as it is not about modifications to the CPE.

The next few hours will be crucial. The French youth and workers have already spoken and have done so clearly: they want the withdrawal of the CPE and by implication the fall of the de Villepin government. The ruling class is afraid and will try anything in order to diffuse the movement, and if that means sacrificing de Villepin they will not hesitate. The movement of the workers and youth has reached such a level that it will be in fact very difficult to put an end to this mobilisation without a full withdrawal of the CPE.

See also our photo gallery and a short video.