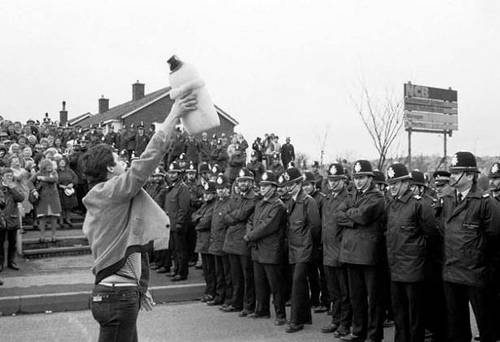 The first few weeks of March 2014 will be a time of deep reflection for hundreds of thousands of people across the UK who will recall what they were doing when the 1984/85 coal miners’ strike began.

Having had a few false starts in 1981 and 1983 when the Tory Cabinet instructed the National Coal Board (NCB) to test the resolve of the National Union of Miners (NUM) to fight against Pit closures in South Wales and in Yorkshire, the starting whistle was blown with the announcement that the Cortonwood Colliery in the Yorkshire coalfield would close after being hauled through the antiquated colliery review procedures of the NCB at the beginning of 1984.

Miners and their families will remember those miners and their strike supporters who will have passed away since, and in particular those who were killed either by reckless lorry drivers at picket lines at the time or from the “death by malice” of someone hurling a brick at a striking miner, as was the case with David Jones outside Thorseby Colliery in the Nottingham coalfield and Joe Green who was killed on the picket line.

We will also remember the thousands of miners who were killed or maimed in the coal mining industry in over a century of industrial scale mining and who received little or no compensation for their loss from the private coal owners, who did little if anything to mitigate the causes of explosions and colliery accidents until they were forced to by the industrial power of the combining of miners into Associations, Area Unions and the NUM itself in 1946.

Over 500 men died from colliery accidents or explosions in the Maesteg area alone - a statistic repeated in the coalfield across the UK. The miners of South Africa and the United Mineworkers of America still experience the same fate today.

In March 2014 we will witness the former mining areas of Yorkshire, Northumberland, Durham, Kent, Cokeman’s Area, COSA (Surface and Clerical Workers), North and South Wales, Scotland, Lancashire, Cumberland and the Nottingham coalfield villages who supported the NUM coming together in public meetings, picnics, exhibitions and social evenings. These will bring together those former miners and their support groups who fought for their jobs in the late 1970s and early eighties, culminating in the Great Miners’ Strike of 1984/85.

It was a decade of struggle against the insidious forces of the Government and its state. In 1984 at the height of the strike, Dennis Skinner, MP for Bolsover and former miner, described the police as “Margaret Thatcher’s Political Army”. The Association of Chief of Police Officers became a national police force in the making during 1984 as they pushed the boundaries of stop and search methods to prevent flying pickets travelling the country to picket working mines, coal depots, power stations and steel works.

We remember well the propaganda orchestrated through the press and media by a Tory government lead by Margaret Thatcher who micro-managed the campaign by the Tories against the miners. This political warfare was prepared in the so-called Nicholas Ridley plan (leaked and published in The Economist, May 27th 1978) which planned the assault of the Government against the NUM:

“Government to choose the battlefield [note the military language]... Industries grouped together by the likelihood of winning strike action...Coal stocks built up in power stations...Plans to import coal from non union ports... Non union lorry drivers to be recruited...Dual coal-oil firing generators to be installed at great cost...Cut off money supply to strikers and make the union finance them...Train and equip a large mobile squad of police, ready to employ riot tactics in order to uphold the law against violent picketing”.

All the language of a military campaign was used by Ridley as Thatcher prepared for a class war.

The NUM were rightly seen as the advanced guard of the trade union and labour movement. Its long history of constant struggle to keep viable pits open against the whims of capital investors in the 19th Century and in the first half of the 20th Century continued until that great day of nationalisation in 1947 when the Collieries “ Were managed by the NCB on behalf of the people,” so proclaimed the big flags put up on the pit tops around the country.

My Father, a former Miner at Great Mountain Colliery-Tumble, Duffryn Rhondda, South Pit Glyncorrwg, Ogilvy, Fochriw and Staffordshire Collieries, recalls the flags being taken down, shredded by the winds and in tatters a few years after. It was a metaphor for the old days returning by the end of the 1950s. Only this time the government with its regional Coal Boards reporting to the National Coal Board, had replaced the private coal owners. It certainly wasn’t the workers control and management envisaged by the great miners leaders of the first half of the 20th Century.

Even when miners at last had a progressive pension scheme, it was modest in comparison to other schemes in the industry or elsewhere. Let’s not forget that it took until 1974 before we had a miners’ pension scheme (MPS) of any substance.

This MPS was introduced based on 5% of your income topped up by 6% by the employer - the NCB. Between 1969 and 1974 you were only expected to pay 7 shillings and 6 pence a week towards your pension and the NCB paid nothing. Before 1969 you only paid 3 shillings and 6 pence. No wonder miners retired with no money to fall back on, forcing them to work on until they were 68 and 72 years of age. What a miserable existence relying on a state pension of £15 a week in the 1960s. Their pension schemes only reflected the pennies that had been paid in.

Following my Great Grandfather, Grandfather and my Father, I began work as a face worker in 1974 in the South Wales area of the Llynfi and Afan Valleys.

In April 1978 I was elected as a full time Lodge Secretary of St John’s Colliery NUM and became South Wales Executive Council member in 1981. The NCB had shut Duffryn Rhondda, a pit with 1,000 men in 1964; Afan Ocean, a pit with 700 men in 1968; Glyncorrwg South, a pit with over 600 men in 1969. There was nothing left in the Afan Valley except the black scars called slag heaps and tips on the mountain sides and the bulldozed surfaces of the collieries themselves. Many collieries were just abandoned, made safe and left bare on the hillside, as was the case with Glenavon Colliery near Croeserw in the Afan Valley.

The indignation amongst miners and their families built up. Work was getting harder to find. They closed Caerau in 1977 and Coegnant in 1981. There was nowhere else to go except to wait for a far off dream called Margam Super Pit. In the 1981 South Wales strike, which lasted two weeks, someone left a Window open overnight to the offices of Mr Alan Morley, the Area No 2 NCB Agent, and we obtained from a source all the drawings and files that proved that a Margam Mine could be mined from the Llynfi Valley side and from within the existing St John’s workings.

There existed the real prospect of opening a modern mining facility producing Grade 301a coking coal, ideal for the local steel works at Port Talbot, with a coal reserve of over 30 years with modern mining methods of extraction based on what mining engineers would call coal extraction using ‘ semi horizon mining’ in a least six coal seams.

The effect of this massive underinvestment meant that by 1976 the NCB were offering inducements in the form of enhanced pensions to workers to take early retirement after 60 years of age. This offer was then extended to over 50s, with and other men being offered transfer / relocation money if you allowed your pit to close and transferred to another site. Anything to shut the pits.

By 1981 the NCB were getting desperate to implement their plans. After the publication of Cabinet Papers under the 30 year disclosure of documents rule, John Dunn, a Marxist miner from Derbyshire, recently revealed that the Tories had a small Cabinet group codenamed Misc 57. They planned the campaign of misinformation, peddled to make Arthur Scargill out to be a liar when they were the liars all the time, concerning a hit list of 74 pits to be closed and 68,000 miners to be made redundant. Ian Macgregor, the NCB Chairman, sent letters to the homes of striking miners where he wrote that “categorically and solemnly...Scargill’s claim of 70,000 jobs at risk” was...”absolutely untrue”. This letter was a barefaced lie from start to finish.

They employed people to infiltrate the mining communities and to manipulate the news and media. We might have been naive as to the exact knowledge of what was going on, but we knew these people, like the “Silver Birch”, the working Nottingham miner who organised the Working Miners Committee in Nottingham during the 1984/85 strike, were not doing it out of principles of fair play and justice. They did it for reward. Sacks of money were handed over by government agents and members of the working miners committee given prestige and in some cases new identities and healthy state funded personal pensions.

After Corton Wood was announced for closure, the NCB published a list of 24 collieries that would now be “reviewed” for closure. Six were announced in the South Wales Area by Phil Weekes, the Area Chairman of the NCB. The list included my own colliery, St John’s in Maesteg. This drip feed of announcements was designed to both test the resolve of the miners as well as trying to divide and rule by leaving out the Nottingham and Midland coalfields.

The story of the miners’ strike has been written in various ways. In the book ‘When we were Miners’ I have referred to General Carl Von Clausewitz’s book ‘On War’. Clauswitz said, “War is an extension of politics...” He also extended his strategy to the conditions required to win a battle:” You cannot be a general without an army...the best strategy is always to be strong; first in general and then at the decisive point...there is no higher or simpler law of strategy than that of keeping one’s forces concentrated...superiority of numbers is the most common element in victory...superiority...can obviously reach a point where it is overwhelming...it follows that as many troops as possible should be brought into engagement at the decisive point.”

There were a few decisive points in the course of the Miners strike itself. Three decisive moments stick out:

Alongside the 1926 General Strike, which lasted nine days, with the miners remaining on strike for a further six months for ”not a penny off the pay and not a minute on the day”, the year long Miners’ Strike of 1984/85 was the most momentous class battle in British 20th Century history. The personal development of people achieved through learning the organising skills and abilities to defend the communities of thousands of miners and supporters was created during the year long strike and beyond. It was better to have fought and lost than not to have fought at all!

Many who had fought in the Miners’ Strike contributed to the battles over the Poll Tax, which was swept aside and replaced by the Community Charge by Michael Heseltine in the political vacuum that prevailed for a time after they ditched Margaret Thatcher as Prime Minister in November 1990. Margaret Thatcher didn’t live long enough to gloat over the 30th anniversary of the Miners’ Strike. Those who remember those events will have also learnt the lessons of the struggle: to educate, agitate, and organise, and to prepare for a socialist society where the greed of landlordism and the exploitation of working people will have been a thing of the past. The chant of the miners’ support groups was: “The miners united will never be defeated”.

One of the main lessons for me has been the realisation that a desirable form of human, political, and economic society based on fair and equitable distribution of wealth and power will not come about by a passive trade union and labour movement.