Canada
Share
Tweet
Every year labour activists from across British Columbia descend on the town of Cumberland for Miner's Memorial Day. The annual event is held to commemorate the hundreds of workers who died in Cumberland's coal mines and murdered socialist Ginger Goodwin. Comrades from the International Marxist Tendency are always present for the ceremony, but this year we played a much larger role. 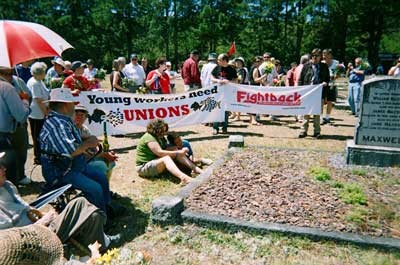 Every year labour activists from across British Columbia descend on the town of Cumberland for Miner's Memorial Day.  The annual event is held to commemorate the hundreds of workers who died in Cumberland's coal mines and murdered socialist Ginger Goodwin.  Comrades from the International Marxist Tendency are always present for the ceremony, but this year we played a much larger role.

The ceremony was held on June 24th, in Cumberland's cemetery at the grave of Ginger Goodwin.  It began with performances from local musicians.  This was followed by a few speeches.  Mike Palecek spoke on behalf of Fightback and the International Marxist Tendency (we provide the text of his speech below).

After the speeches, flowers were laid at Ginger's grave on behalf of different trade unions.  Comrades Miriam Martin and Brent MacVicar were the last to lay their flowers on behalf of Fightback and the International Marxist Tendency.  We had a small surprise prepared for the crowd.  After laying their bouquet on Ginger's grave, Brent stepped forward to place flowers at the grave of Joe Naylor.

Naylor was Ginger Goodwin's best friend.  He was the leader of "the Big Strike" in 1912 and was one of the main organizer's of the Socialist Party of Canada's chapter 70.  This comrade led one of the biggest battles BC's labour movement has ever seen.  He was also the President of the BC Federation of Labour for a brief period.  Joe Naylor's modest headstone lies at the foot of Ginger Goodwin's grave.  We thought it was important to commemorate this socialist fighter as well.

The ceremony continued with a short march to "Miners' Lane" in another part of the cemetery.  Roses were laid on the graves of the many miners who died beneath Cumberland, including many unmarked graves.

Red in the Woods 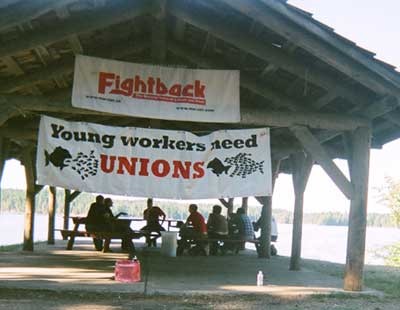 Fightback organized a small socialist conference to coincide with Miner's Memorial Day.  This was the first annual Reds in the Woods.  The conference was held at Comox Lake Campground, where most of the out-of-town activists stay for the weekend.  We had the beautiful backdrop of Comox Lake for our three workshops.  A dozen people attended the meetings.

Miriam Martin gave a workshop titled What is Marxism.   She focused on the basics of Marxism touching on historical materialism, dialectical materialism and Marxist economics.  This informative talk was followed by an in depth discussion.

Shannon Bundock, Co-Chair of the Mobilization Against War and Occupation in Vancouver, spoke on War and Imperialism.  Her talk focused on the wars in Iraq and Afghanistan and the tasks for the anti-war movement in Canada.  This was followed by a lively discussion covering everything from the developing world situation, to Lenin's explanation of imperialism.

Finally, Mike Palecek led off on the Latin American Revolution.  He spoke on the situations in Venezuela and Bolivia and explained the results of the recent elections in Columbia and Peru.  The discussion lasted long into the night around the campfire.

In fact, many people paid for our rights with their lives.  Some died on the picket line, some were hanged in Chicago and some like Ginger Goodwin were hunted down and shot. 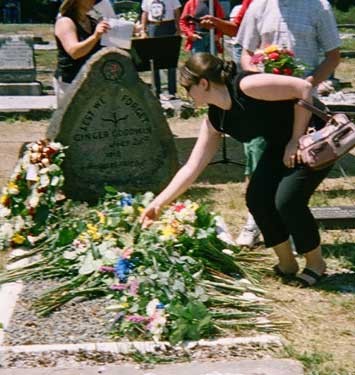 And now, almost 90 years later all of the rights that Ginger Goodwin, Joe Naylor and their comrades fought for are being taken away.  The eight hour day no longer exists for most workers in this province.  It's time we send a message to Ottawa and Victoria: we fought to get these rights and we'll fight to keep them! (Applause)

But while Ginger Godwin and his comrades fought for every reform, for every scrap, for every improvement in working conditions, they did so with the understanding and the explanation that we haven't really won anything until we've overthrown capitalism. (Applause)

And this is the most important thing to remember and the biggest lesson we can take home this weekend.  It's time we achieve Ginger Goodwin's real dream.

Let's take back our eight hour day and let's send this rotten capitalist system into the history books where it belongs!