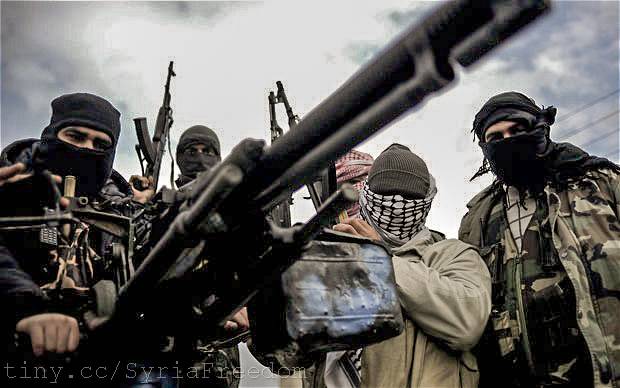 As the Syrian civil war drags on into its fourth year, the war is entering a new phase. While Turkey and Saudi Arabia are stepping up their proxy operations in the country, Iran has replied by deploying thousands of regular armed forces.

Turkey and Saudi Arabia, who have each supported  competing rebel groups in Syria for the duration of the civil war have now begun to openly pool their resources in the country. The first result of this move has been the setting up of the “Army of Conquest” in Northern Syria comprising of a series of groups, but which is dominated by Islamists groups such as Jabhat al-Nusra and Ahrar al-Sham (both linked to Al Qaeda). From here the two powers have set up a new joint command centre to coordinate the struggle against the Assad regime which they view as a bigger threat to their interests than the Islamic State.

The new coalition has already had a series of successes, mainly in the Idlib area in Northern Syria. In April the it  took over more or less the whole of the the Idlib governorate in a surprise offensive which also coincided with clashes in the southern Daraa district as well as a few Israeli airstrikes against the country. The backbone of the operation, however, was an injection of funds from Saudi Arabia as well as intelligence and coordination support by the Turkish army. This level of coordination has hitherto not been witnessed in Syria where the rebel groups and their imperialist backers have generally been characterised by disunity.

At the same time the two powers are pushing for Jabhat al-Nusra - the strongest force in the coalition - to recycle themselves as a more “legitimate”, “civilised” force. Al Jazeera and other Gulf state media outlets have begun portraying the Al Qaeda affiliate as a non-sectarian peace loving group of freedom fighters. They conveniently seem to forget that the group was on the path of merging with the Islamic State (IS) only a few years ago - a merger which only failed due to issues of personal prestige and power politics.

Crisis in US alliance

The overt stepping up of coordination, as well as giving outright support to the most extreme tendencies of the Islamist movement, is also another blow to the relation between US imperialism and its traditional allies in the region.

Clearly these regimes have always supported the Islamists, but to do so overtly, as well stepping up their support financially and militarily, is directly opposed to the Americans who do not want to embark on a new adventure with Islamist groups. In fact the US today realises that the only way of stabilising Syria is by keeping the Assad state apparatus intact.

However, an even more serious clash with the US lies in the fact that this project also aims at undermining the US supported groups within the country. One rebel commander who was sympathetic to joining the US Train and Equip Programme explained how he was discouraged by the demands of the Americans:

“We submitted the names of 1,000 fighters for the program, but then we got this request to promise not to use any of our training against Assad. It was a Department of Defense liaison officer who relayed this condition to us orally, saying we’d have to sign a form. He told us, ‘We got this money from Congress for a program to fight ISIS only.’ This reason was not convincing for me. So we said no.” (Exclusive: Syrian Rebels Backing Out of U.S. Fight Vs. ISIS)

The deal between Turkey and Saudi Arabia, however, means these groups will receive funds without having to comply with the demands of the US. This is a heavy blow to the already weak attempts by the US to build up forces loyal to itself. In the end this means that US dependence on the Assad regime will increase along with the divide between it and its formal allies. It is in fact farcical that the US is in more or less open conflict with the main powers of its international coalition against IS. Further to the disintegration of US alliances, today Israel and Saudi Arabia formally presented their long hidden cooperation and coordination against Iran’s activities in the region. Between the lines of course it was clear that Iran’s activities in the Middle East today fall more or less in line with the activities of the US.

The Turco-Saudi entente is a serious threat to the Syrian regime which has been strained after four years of intense fighting. Seeing this, Iran has stepped up its engagement as well and is said to be deploying 15,000 troops in its first direct intervention in the Syrian civil war.

Qasem Suleymani, the commander of the Quds forces coordinating the intervention of Iranian forces in the region told an Iranian controlled source that “the world will be surprised by what we and the Syrian military leadership are preparing for the coming days.”

This is a major escalation of the developing conflict in the region which up until now had been confined to the major powers of the region waging proxy wars. However, seeing the aggressions in Syria, especially by Turkey which seems determined to dominate parts if not all of Syria, the Iranians had no choice but to escalate their involvement. Without this the future of their ally, the Syrian regime, would be in serious doubt.

This escalation sets a dangerous precedent, however, and could be the beginning of a far more explosive phase in the crisis of the Middle East. Saudi Arabia seems determined to keep up with the trend and has made it clear that it is determined to become a nuclear power soon. In the light of the increasing tensions in the region this would be an extremely dangerous endeavour. This would make the kingdom an even more important target for Islamist groups such as IS and it would add to their efforts to break up the country. Clearly the implications of such a scenario would be disastrous.

All roads lead to US imperialism

The root causes of the barbaric mess in the Middle East of course lead back to US imperialism. Not only did they destroy the equilibrium of the region by invading Iraq, thus propelling Iran and Saudi Arabia towards a conflict, they also built up sectarianism and Islamic fundamentalism as a part of their shortsighted plans.

This has been confirmed by the recent revelations that the US and the West have been supporting Islamist groups, among them also IS, in Syria. On Monday charges of terrorism against a swedish man was dropped after the defence revealed that British intelligence had been supporting the same group that the man was fighting with.

Another scandal has been the revelation of a declassified CIA report from 2012 which welcomes the perspective of a “Salafist principality” in eastern Syria and an al-Qaida-controlled Islamic state in Syria and Iraq. The document recognises al-Qaida in Iraq (which became IS) and their allies as the “major forces driving the insurgency in Syria”. It also states that “western countries, the Gulf states and Turkey” were supporting the efforts to take control of eastern Syria.

Now of course the monster created by the US - and its allies - have become a liability and imperialism is forced to rely on its historical enemy, the Islamic Republic [of Iran], to fight it. The same applies to the historical allies of the US in the region. Having supported and nurtured the most reactionary and backward forces against the Arab masses, the US has now lost control over its creations as they lash out in an existential struggle. From being pillars of support, the reactionary US supported regimes in the Middle East have become sources of instability for US imperialism.

But by its lack of decisiveness and ability to choose sides, the US is only adding to the rising tensions which are threatening the future of the whole region. Like a drunken man it stumbles from one crisis to another. Hampered by its own greed and degeneracy it is unable to take any measured decisions, creating two fires every time it extinguishes one.

All of this is yet another example of the historical decline of US imperialism, economically, politically and militarily. It is this weakening of the former “policeman of the world” that explains the rise of a series of regional and local powers, who are less and less inclined to follow the diktats of US imperialism and more intent on promoting their own interests. It is a recipe for increased regional conflicts and wars, which will further destabilise global capitalism.