Mexico
Share
Tweet
On April 20, Mexican police killed three steel workers while attempting to break a strike in the city of Lazaro Cardenas. This is part of an attempt by the right wing Fox government to destroy the Miners' and Steel Workers Union (SNTMMRM). The recently created Front for Trade Union Autonomy and Unity has called for a protest general strike.  See also a document by the Mexican Marxist Tendency Militante on the 1906 Cananea miners’ strike and the lessons for the miners’ struggle today: “Centenario de la huelga de Cananea; CANANEA Y PASTA DE CONCHOS” and the statement of Militante on the killings at Lazaro Cardenas: “La masacre en la siderurgia Lázaro Cárdenas – La clase obrera debe ajustar cuentas” 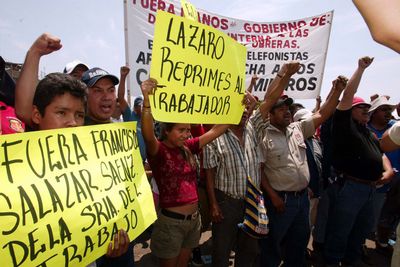 On April 20, 800 armed police officers attacked striking steel workers in the Mexican city of Lazaro Cardenas, Michoacán, in an attempt to put an end to the 18-day long strike of the 500 workers of section 271 of the National Union of Mine, Steel and Allied Workers of the Mexican Republic (STMMSRM) at the Sicartsa steel mill. As a result of clashes with the police, three workers were killed and nearly 100 were injured.

It was just after 6:00 in the morning when police from both the Michoacán state and national forces, together with agents from the Special Operations Group, entered the steel mill compound with the aim of implementing an eviction order which had been issued after the right-wing government of Fox had declared the strike illegal. The workers, outnumbered and outgunned, went out to look for support. Thousands of workers came out from Mittal Steel (also organised by section 271 of the STMMSRM), from the docks, and other workplaces in the industrial city of Lázaro Cárdenas. By noon, the workers had fought their way back into the Sicartsa steel mill using Molotov cocktails as well as bulldozers and other vehicles as improvised armoured vehicles. The police eventually fled the installation and the army was called to protect strategic buildings. 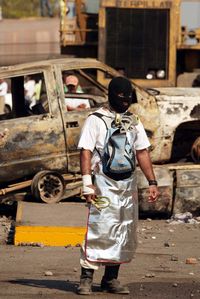 The immediate origins of this conflict, which has become an industrial war, can be found in the mining tragedy at Pasta de Conchos on February 19. Sixty-five miners died after being trapped in the mine they were working at in San Juan de las Cabañas in the northern state of Coahuila. The miners' and steel workers union, SNTMMSRM, blamed the company, Grupo Mexico, and called the accident “industrial terrorism”. When the government and the company decided to stop the rescue efforts on February 28 a number of strikes erupted in Grupo Mexico’s copper and zinc mines around the country.

Another issue that fuelled the anger of the miners and steel workers was that on the same day, February 28, the government decided not to recognise Napoleon Gomez Urrutia as the president of the SNTMMSRM and to recognise instead rival unionist Elias Morales Hernandez.

According to Mexican labour law the unions must notify the government of changes in their leadership. The government is “to take note” of these changes. In this case an entire operation was organised by Minister of Labour, Salazar in order to get rid of Gomez Urrutia. The government accused him of fraud and of being involved in the disappearance of millions of dollars from members' funds. But this, even if it were true, is not the real reason why the right-wing Fox government wants to get rid of the leader of the miners’ union.

Gomez Urrutia is a classical representative of charro trade unionism (state-controlled unions linked to the PRI ruling party), which has dominated Mexican trade unions for decades. Urrutia, who has never worked a single day in a mine or steel mill, is also an Oxford educated millionaire, company manager and owner, who inherited his position at the head of the union from his father, who had held the position since 1960. But over the last few years he has presided over a growing wave of militancy of the miners and steel workers of Mexico, and was forced to oppose the Fox government’s attempts to modify the labour law, which subsequently failed in the face of a massive trade union revolt. 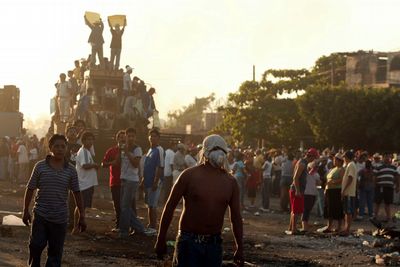 For the last three years a whole series of bitter strikes have been called by steel and mine workers in an attempt to stop the process of casualisation of labour and over exploitation as a result of the privatisation of most of the mines in the country. Grupo Mexico has been one of the main beneficiaries of this process. As a result of these strikes, miners and steel workers have won higher wage agreements than other sections of the working class and the union is one of the few to have increased its membership.

Gomez Urrutia decided to challenge the election of Victor Flores as the head of the Congress of Labour (CT), the umbrella organisation that brings together most of Mexico’s official unions and union confederations, which were traditionally dominated by the PRI. The possible election of Gomez Urrutia to the head of the CT worried both the PRI leaders and the union bosses, as well as Fox’s PAN government. President Fox had intervened directly in the election of Victor Flores, president of the railway workers’ union, who was also known for having profited personally from the privatisation of the railways in which 100,000 workers lost their jobs. They needed to get rid of Gomez Urrutia and any excuse was good enough.

In response to the attempt of the government to remove their union leader and to demand better wages and conditions, a national strike of 270,000 steel and mine workers took place on March 1-3. Then on March 24, 1,200 workers of section 298 of the SNTMMSRM at the La Caridad mine in Sonora went on an all-out strike to demand a 15% wage increase and more secure working conditions from mine owners Grupo Mexico. The state replied by jailing Indalecio Perez Morones, the leader of section 298. Amongst other things he is accused of organising the blockade of Bancomer bank offices in the state. Bancomer had seized the miners' 4 million-peso strike fund. Here we can see how the state acts in conjunction with the bosses to break a union which is seen as becoming a hotbed for rank and file militancy. 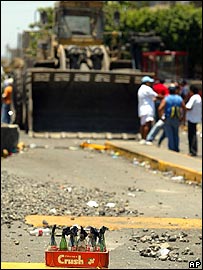 The strike escalated and on April 2 workers at Sicartsa and Mittal Steel also went out on strike. The companies involved started to lay off hundreds of workers in an attempt to break the strikes. Mittal Steel soon announced the sacking of 800 trade union members and Grupo Villacero sacked 300 at the Sicartsa plant and another 300 at the Viga Trefilados steel wire plant, after the government declared the strikes at both companies illegal. Grupo Mexico also started the process of sacking striking workers. This showed how the whole strategy of the government and the companies was to smash the union in order to drive wages and conditions down even further.

On April 12 Mittal Steel backed down and reached a settlement with the union. This was a victory, since it included the reinstatement of all sacked workers, the payment of wages and benefits for the period of the strike, the withdrawal of all court cases against striking workers, and the company’s recognition of Gomez Urrutia as the union leader. This encouraged workers in other steel plants to continue the strike, and they received regular payments to their strike funds from the workers at Mittal.

The killing of the workers at Lazaro Cardenas has shocked all of Mexico. The interference of the Ministry of Labour in the internal affairs of the unions in order to put “safe” leaders at the head of the CT and the miners' union has already led to the formation of a National Front for Trade Union Autonomy and Unity (FNAUS), composed of independent unions (like those who left the official CTM confederation to set up the UNT in 1997) and dissident official unions (like the CROC, the COR and the Miners’ Union). The FNAUS has already called for a one-hour national strike on April 28, and is now discussing turning this into a 24-hour strike after the massacre at Lazaro Cardenas. 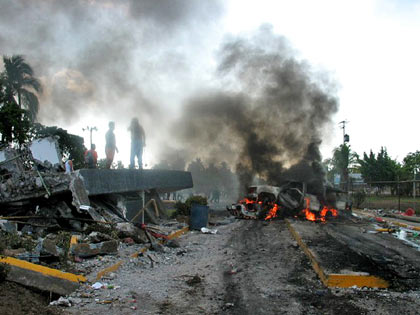 It seems that in the end the April 28 protest will only be a 1-hour national strike, but the very fact that there have been discussions over the last two years on the need to call a general strike is significant in itself. The last time there was a general strike in Mexico was in 1916.

This dispute is also a confirmation of the tactic of remaining inside the official unions to fight for union democracy and a militant programme of struggle, a tactic which the Mexican Marxists have advocated for a long time. As we can see, the union that is now at the forefront of the class struggle, the STMMSRM, is one of the official PRI dominated unions. The pressure of the class struggle is finding a powerful echo even here. However, some unions which split away from the official organisations decades ago have in turn become bureaucratized. One case in point is the UNAM university workers’ union, STUNAM.

The weak bourgeois government of president Fox has been unable to carry out any of the key measures that the ruling class demanded from it: the privatisation of oil and electricity, the reform of the labour law and the reform of the social security system. Every time it has attempted to implement one of these measures it has been met with massive opposition from the trade unions, which mobilised hundreds of thousands of workers and defeated these counter-reforms. Now the Fox government is in its last months, and it looks very likely that Andres Manuel Lopez Obrador, from the left-wing PRD, will be elected. A year ago, when Fox tried to prevent AMLO from standing in the elections one million people came out to the streets and forced Fox to back down.

The prospect of a victory for Lopez Obrador fills the ruling class in Mexico with fear. They accuse him of being the Mexican Chavez. AMLO has spent most of his campaign trying to reassure big business and Washington that he is the safest bet for the ruling class, and that he will be safe for business. In fact some PRD regional governments have already taken measures against the working class, and the governor of Michoacan, partly responsible for the police massacre at Lazaro Cardenas, is a member of the PRD.

But what the ruling class is really worried about is that the masses of workers and peasants will perceive a PRD government as being their own and will put enormous pressure on it. What they fear is that the election of AMLO will open a wave of militancy the PRD leaders will not be able to control.

The killing of workers at Lazaro Cardenas is a reflection of a new period in Mexican politics and the sharpening of the class struggle, in which Mexican workers are recovering their best traditions of militancy and class struggle (many of them linked to the miners’ union).

An excellent article on the background to these killings is Dan LaBotz’ special issue of Mexican Labour News and Analysis, “Nationwide, Wildcat Miners’ Strike in Mexico: The First Act?“