Mexico
Share
Tweet
The Mexican bourgeoisie is determined to get its man declared as President of the country. The masses are equally determined to stop this blatant electoral fraud. In some areas of Mexico an openly insurrectionary mood is developing and the struggle is going well beyond the question of the ballot recount. Revolution is brewing throughout the country.

Mexico is roaring like a lion. The country is in revolt like it has never been since the revolutionary peasant's war of Pancho Villa and Emiliano Zapata almost 100 years ago. The electoral fraud of July 2 to the detriment of Andres Manuel Lopez Obrador (AMLO) of the Party of the Democratic Revolution (PRD) is creating an unprecedented and deep social impact. This is not a mere constitutional crisis.

The whole establishment, the oligarchy, American imperialism and the European Union have in fact taken sides and are backing the right-wing candidate Felipe Calderon of the Partido de Allianza Nacional (PAN). The official institutions have declared Calderon the (close) winner. In fact, they want to impose him on the Mexican population. Felipe Calderon as the new president has the task of making sure that the right-wing policies of his predecessors Fox and others will continue. But as opposed to other electoral fraud in the past - a feature of Mexican "democracy" - the protests against the present fraud are building up.

Zocalo, the eye of the storm 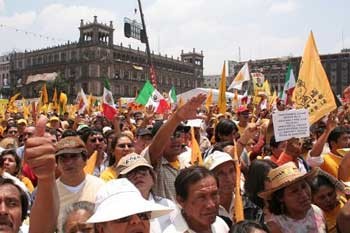 At the first mass meeting in the capital 700,000 people gathered on AMLO's initiative. Two million protesters filled the centre of the city 14 days later. The record number of protesters was broken on Sunday July 30th with a turnout of three million demonstrators. The main demonstration was strung out over two kilometres from the Zocalo square. Across the country a total of seven million people demonstrated. One demand brings together this mass of people: all the votes have to be recounted, ballot paper by ballot paper, ballot box by ballot box!

Sunday July 30th was different from previous demonstrations. That evening a big part of the demonstrators decided not to simply go home. The Zocalo square was occupied. Tents were set up for people to discuss and to plan actions. The massive campsite also blocks the commercial and administrative centre. The area in the town centre that has been occupied is at the same time the junction for the transport of tens of thousands of people from different "poblaciones" or outskirts of the capital.

Mass actions have taken place in rapid succession: motorways have been blocked and executive staff from big foreign companies have been prevented from working. There have been protests in front of the stock exchange and the major banks in the capital. The bourgeois press claims that this is costing the companies millions of dollars. Mass pickets were organised in front of important official buildings like the Federal Electoral Tribunal (TFE), the institution in charge of organising the elections but which has in practice organised the fraud. Our comrades of Militante have been playing an important role in this with the launching of action committees against fraud. 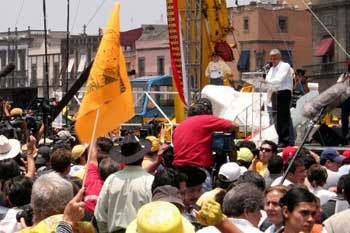 On August 5th the TFE decided to recount part of the ballots. This was a concession meant to mollify and divide the protest movement, in reality a ridiculous move on the part of the establishment. In total only 9.07 percent of the votes were recounted. Nevertheless, the people immediately knew what was going on. Officially, according to the recount there would be few differences compared to the first count. According to AMLO this recount did actually point to serious irregularities. "Among them were more than 50,000 missing voting slips as well as ballot boxes containing about 50,000 more votes than the number of people on the electoral register. Watergate is child's play compared with what went on here. But they [the authorities] don't want a full recount because they are going to find many irregularities." (Financial Times, August 21st, 2006). That is the real face of democracy under capitalism. As Marx and Engels explained: "No bourgeois republic, however democratic, can be anything but a machine for the suppression of the working people by capital."

At the new mass gathering in the centre of Mexico City in mid-August, AMLO gave a new turn to the protests, undoubtedly under pressure from the mass movement. Now he is linking the struggle against electoral fraud with a general struggle against privatisations, against poverty, against corruption, for access to the media and for a clean-up of the institutions. On September 1st, during the "State of the Union" speech of outgoing president Vicente Fox, there will be more demonstrations. The Marxists around El Miltante are calling for this day to become a general strike. Even more important is the fact that he is calling for the formation of a National Democratic Convention that should gather at the Zocalo square on September 16th. 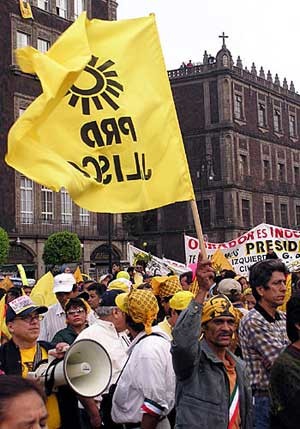 Beginning this week, the Federal Electoral Court rejected 350 complaints against vote rigging during the presidential election. This means that Felipe Calderon will soon be officially declared president. There will be no more recounting of the votes or the ballot boxes! This road has clearly been closed by the bourgeois institutions. This leaves little other choice for the mass movement. AMLO answered that he will never accept "an illegitimate president". He has repeated his call for a National Democratic Convention on the 16th of September and has announced that one million delegates from all over the country will come together in the capital. "If they don't want to respect the will of the people, then the people organised in an assembly will elect its own," he said defiantly. The choice he will put before the million strong meeting is to either consider him as the legitimate president or that he be voted as the leader of a government in resistance or as the coordinator of peaceful resistance.

We believe that the Convention should be the beginning of a revolutionary general assembly that must call for the election of local committees all over the country. They should be the backbone of a new democratic institution replacing the existing corrupt, bourgeois institutions and could move in the direction of taking over (nationalising) the economy. This development is inherent in the current situation.

The best example of this is the struggle in the federal state Oaxaca. For ten years the teachers have been campaigning for higher wages. This year the struggle of the teachers has become the focal point of all movements of other oppressed layers and also of the movement against electoral fraud. There has been the formation of an Asamblea Popular del Pueblo de Oaxaca where 350 different people's organisations are represented. This Asamblea Popular, or permanent assembly, is demanding the resignation of the right-wing governor.

In effect, the Asamblea Popular has obtained important political power. Oaxaca is possibly heading in the direction of a situation like that of the Paris Commune in 1871, when workers for the first time in history took power. The struggle in Oaxaca has become an example for the whole country. Hence the slogan on demonstrations or in the Zocalo "One, two, three Oaxacas!" AMLO is right when he declared: "The most important changes in Mexico have never come about through conventional politics but from the streets." (Financial Times, August 21st, 2006)

Struggle against fraud is class struggle

For the vast majority taking part in the protests against fraud the resistance goes beyond mere indignation at the undemocratic manipulation of the elections. The election campaign took place against a background of heightened social struggle (miners, teachers, social security staff, students). The mass protest is being fuelled by the determination to put an end to the continuation of the right-wing policies of former president Fox by Felipe Calderon. The electoral struggle, and now in particular the struggle against fraud, has become a class struggle. This has come about in spite of the intentions of the leadership of the PRD and of AMLO himself. All actions against fraud are inevitably directed against the interests of the bourgeoisie. The participants are workers, the poor and small peasants. It is the continuation on the electoral plane of the struggle of millions of people who either individually or collectively have been waging a struggle against poverty and oppression.

The sabotage perpetrated by the bourgeoisie is a bitter struggle meant to prevent AMLO from becoming the president of the country. Why are they so determined? North American imperialism does not want to see the turn to the left and the radicalisation we have been witnessing throughout Latin America spilling over into its own backyard. That is why they want to impose Felipe Calderon in order to guarantee six years of policies in favour of Washington and the bourgeois class.

So is AMLO such a great revolutionary as the imperialists depict him? No. At best he can be described a left reformist. Just like other PRD leaders he comes from the PRI, the decaying party of the Mexican bourgeoisie that ruled the country with an iron fist for almost 80 years. AMLO definitely does not want to break with capitalism. The problem, however, is that the neo-conservatives in Washington would like to get control of the Mexican oil industry. AMLO in his electoral speeches has spoken out against the privatisation of the state oil company. The US and the Mexican capitalists see in AMLO a new Hugo Chavez. Whether that is the case is quite another matter. However, it is not so much the person of AMLO whom the capitalists fear. They have a mortal fear of the poor masses of workers and peasants who support him. They fear that AMLO's promises and speeches could set in motion an uncontrollable movement that could go beyond the limits of capitalism. That is the real threat to the interests of the oligarchy and the imperialists, which are considerable in this country. Their fear is justified and it has been confirmed by the events of the last few months. Mexico, which was lagging behind in the process of Latin American radicalisation, is now rapidly catching up with a vengeance.