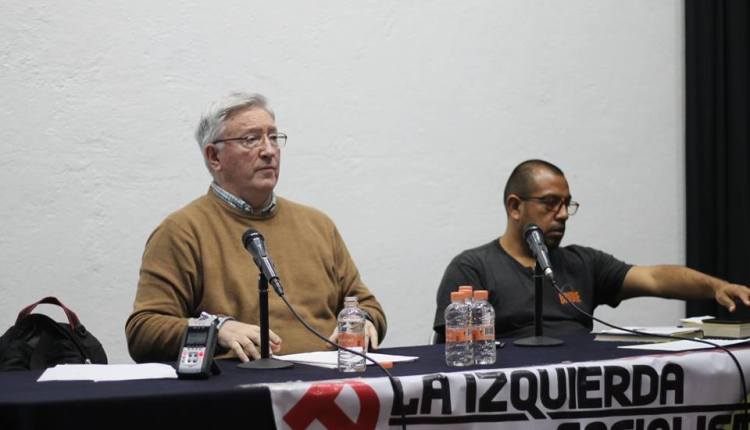 On Monday, dozens of young people and workers assembled in the auditorium of the Leon Trotsky House Museum to listen to a speech by Alan Woods, leader of the International Marxist Tendency. The event was about the ideas of Karl Marx, 200 years since his birth. The day (November 20), could not be more appropriate, as it also marked the anniversary of the beginning of the Mexican Revolution.

In attendance were students from the main universities of the country such as UNAM, IPN and UAM. In addition, there were trade unionists, scientists, academics and activists of Morena, as well Gabriela Pérez, director of the Leon Trotsky House Museum; and Esteban Volkov, grandson of the Russian revolutionary leader, Leon Trotsky. 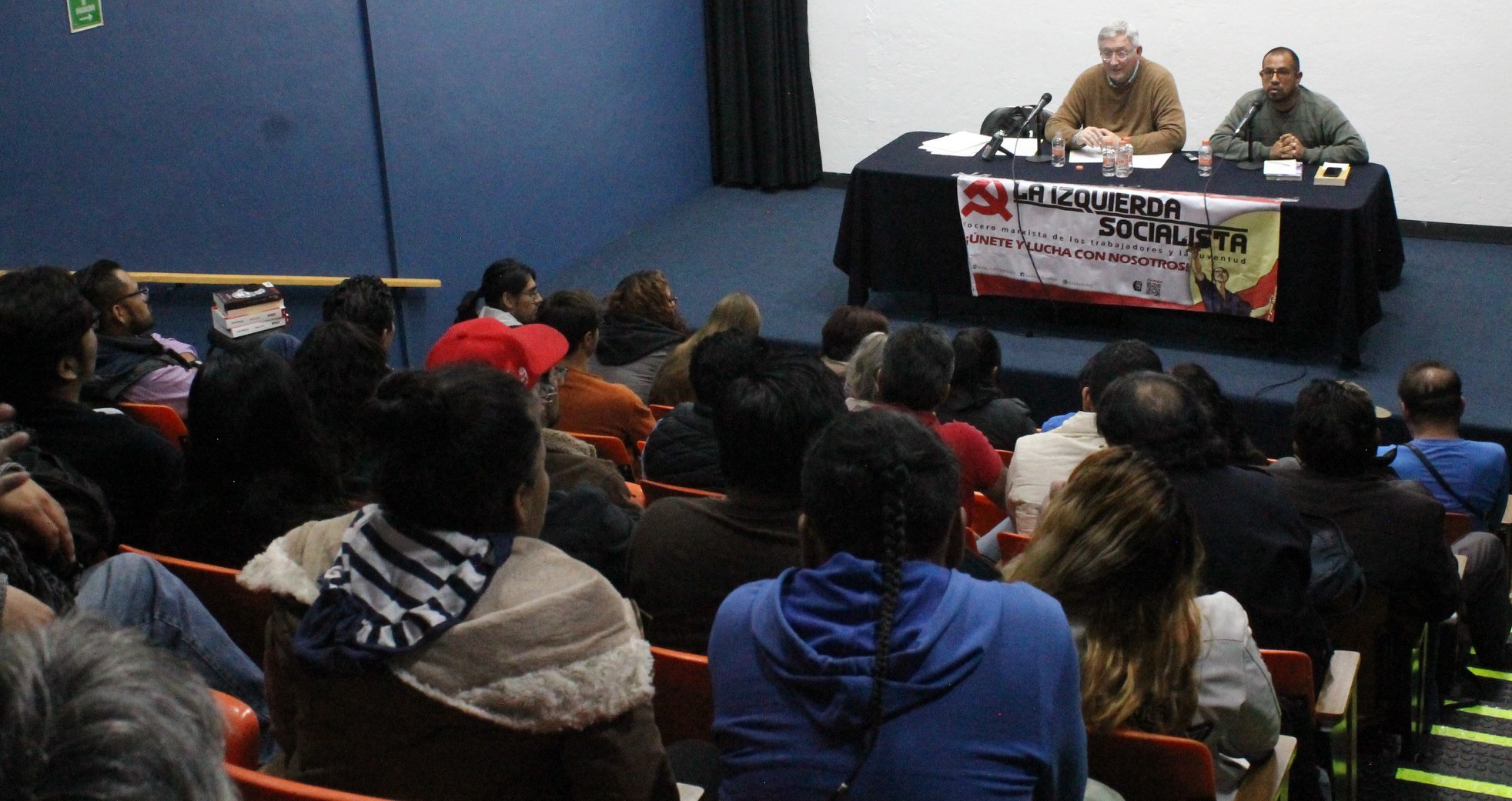 There was great interest in Alan's talk on the relevance of Marxism / Image: La Izquierda Socialista

The bourgeoisie and its defenders were euphoric when the USSR fell, Alan explained. He asked if there was a history student in the room. He said that they had nothing left to do, because one of the ideologues of the bourgeoisie, Francis Fukuyama, declared that, from that time, Marxism had failed and we had reached the end of history. Alan went on to explain how this same character, a few weeks ago, sang a very different song and said that it was time for socialism to return. This admission, after 25 years, is no accident and is not an isolated example. The most serious ideologues of capital, in many cases, have had to give credence to Marx's ideas. The magazine of the great Swiss bank, UBS, published an article entitled "Let's give Marx the opportunity to save the economy". Similar acknowledgements have appeared in the mainstream media of the imperialist bourgeoisie. 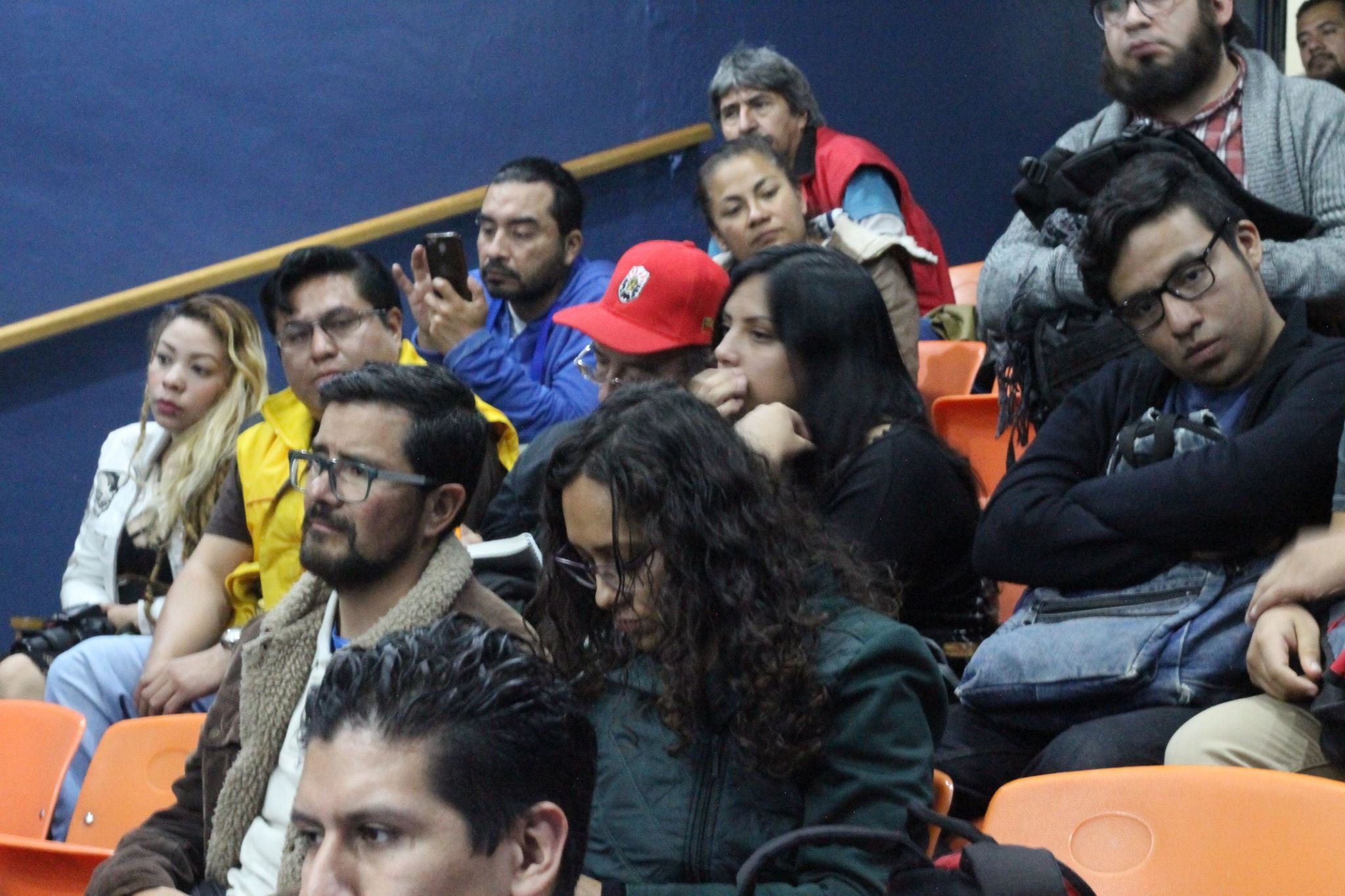 The theme of the talk was the validity of Marxism, and Alan said that the Communist Manifesto is the only book of its time that remains relevant today. For instance, consider its brilliant prediction of the concentration of capital, and now we see how most of the economy today is concentrated in 200 monopolies. Marxism is a science, but not an exact one: it can make predictions in a similar way that a geologist can know that there will be an earthquake, but not exactly when.

Alan, (author of Reason and Revolt: Marxist Philosophy and Modern Science), recalled that Marxism was born as a philosophy and began to give examples of dialectics in nature and society. Just as a living being is born, lives through its prime and then decays and dies, the same thing happens with social systems. Capitalism today resembles the Roman Empire in its period of decline. It is true that the decline of that empire lasted 400 years, but now is not precisely the same situation. If you look at the history, you can see how, from the Palaeolithic period onwards, the line of progress in human civilisation was initially very slow, to the point that things remained practically unchanged for hundreds of years. But that line of progress tended to accelerate, and it was Marx who explained that the real driving force in society is nothing less than the development of the productive forces. Capitalism has developed science, technology, and the overall productive forces in a very accelerated way in the last 200 years. 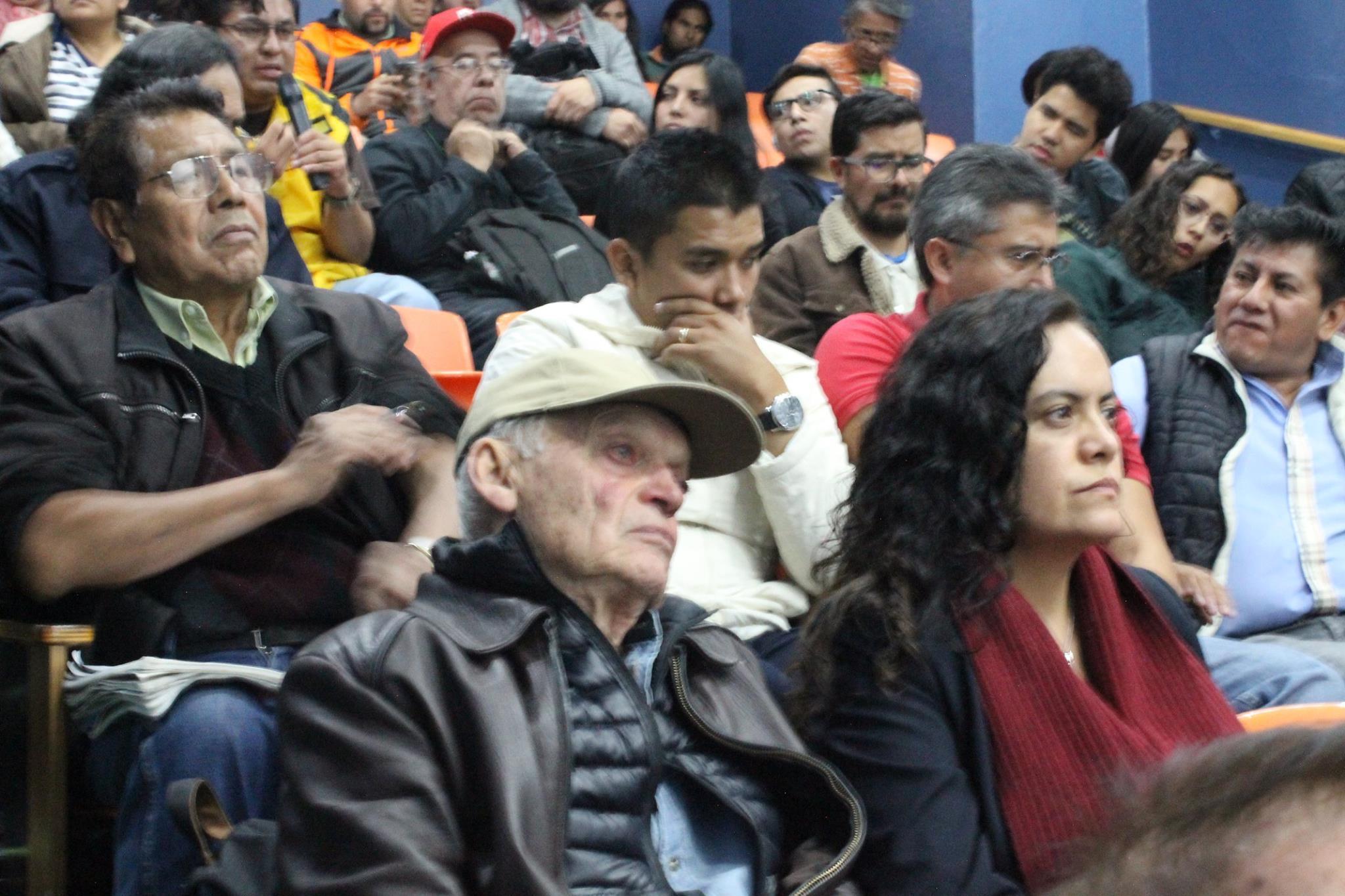 Alan denied the ridiculous idea that Marx reduced everything to economics, although he said that ultimately, and only in the last analysis, the viability of an economic system depends on its capacity to develop the productive forces. Capitalism has reached a point, despite its advances in the past, where it is now unable to develop the productive forces. When a system enters a stage of decline it affects everything: thought, art, culture, philosophy. What do we have now in the realm of ideas? Postmodernism, which tells us that all ideologies must be cast out. In its heyday, when the bourgeoisie confronted feudalism, it had great thinkers amongst its ranks, but in its time of decline we see these absurd notions emerge.

Alan stated that philosophy was born in Greece, when men began to explain how things worked without the need for gods. One of those early philosophers was Heraclitus, the father of dialectical philosophy, who created brilliant aphorisms like: “a man cannot step twice into the same stream because the river is and is not, it flows.”

In the same way that Newton's physics promised to explain everything, but its contradictions gave way to quantum mechanics, formal logic has limits, and that is why dialectics is necessary. Alan explained how Marx’s friend and collaborator, Engels, analysed the science of his day and produced brilliant texts such as The Part Played by Labour in the Transition from Ape to Man, which has been validated by modern science, to the extent that the acclaimed evolutionary biologist, Stephen Jay Gould, recognised the great contributions of Engels.

The audience was very attentive as Alan led them on a whistle-stop tour of economics, evolutionary theory and history. Throughout, he showed the validity of the ideas of Marx and Engels in many areas, in addition to demonstrating the decay of the current capitalist system, and the viability of socialism. He recalled Engels' definition of socialism: it is humanity's leap from the realm of necessity to the realm of genuine freedom. This is more than merely the beginning of the new form of civilization, because what we have today cannot be called civilization. Alan concluded by saying that we are here to fight for a sacred cause: the emancipation of the working class in Mexico, in the Americas and the entire world, leading human civilization to a level never before seen in history. 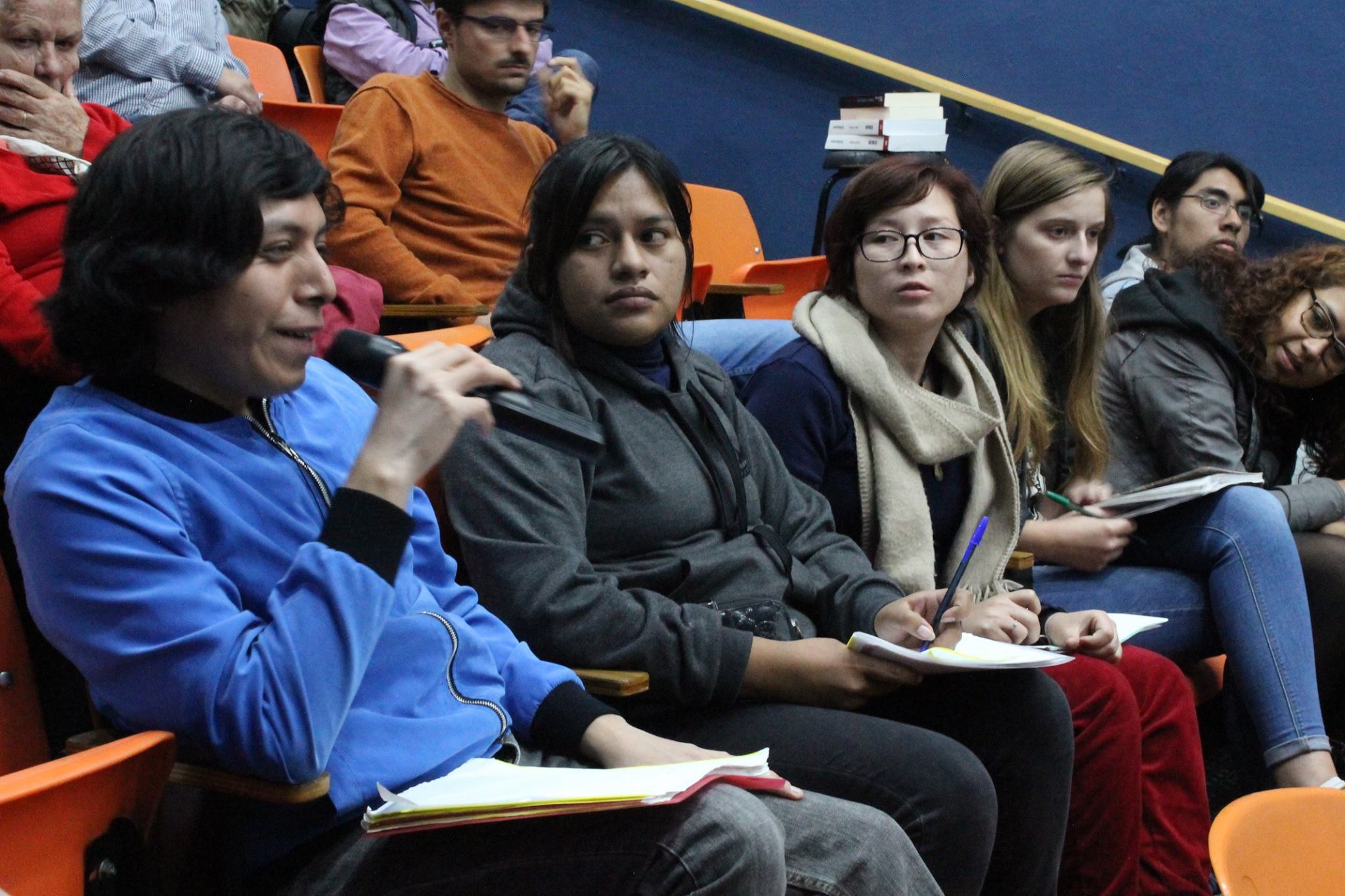 There were many important questions raised by the audience / Image: La Izquierda Socialista

Preparing for the battles ahead

The attendees enthusiastically applauded the end of the speech. A whole series of questions were asked, reflecting a keen interest in current political events and class struggle in Mexico and internationally. Woods said that there was no doubt that a political earthquake had occurred in Mexico, referring to López Obrador's electoral victory, and that the masses are seeking real change. AMLO may be a good person with good intentions, (although we do not know him personally) but in the end, he has only two options: side with the workers consistently and fight for socialism, or yield to the pressures of the bourgeoisie (which will be great) and betray the masses. But Alan said that we should not hesitate, and this is the beginning of the revolutionary process. The working class does not learn from books, it learns from experience, and this will be a rather hard experience. We Marxists must help them understand these experiences by participating in the living moment of the masses with our own ideas.

In response to another question, he explained the viability of socialism with the example of the Russian Revolution, which in the early years resulted in a democratic state and showed concretely that you can have economic growth without bankers or capitalists. The collapse of the USSR can be explained, but Alan said it was the subject of another discussion.

He said that there was an element of demagogy from certain sectors of the Latin American left, because the working class must unite, and not splinter into a thousand separate interest groups for women, homosexuals, indigenous people, etc. He said: “I do not see women or black people or homosexuals here, I see soldiers of the working class.”

Someone asked about which country was closest to the socialist revolution. Alan said many would be surprised by his answer, because it is the USA. It is possible, he added, there may be many difficulties in seizing power in the US further along the line, but it will be the simplest place to carry out socialism. The Trump government has just released a document against socialism that begins by saying that, 200 years after the birth of Karl Marx, socialism was beginning to resurface. Alan also cited his own country, saying that Britain was once very stable and now it is the opposite. In the case of France, Spain and Greece, who knows? He also added Mexico to the list, pointing out the country’s enormous revolutionary traditions and saying that the result of the election must show us something, that the people are looking in the same direction as us. Alan said that we are in the most convulsive period of history and Mexico will see more political earthquakes, meaning we must be prepared for the unexpected, because abrupt and sudden changes are implicit in the current situation. The terrain is fertile for a resurgence of the great Mexican revolution at a higher level, but if we are to succeed it depends on us. We must each take personal responsibility for preparing for the battles ahead. If we work seriously with Marx's ideas in our arsenal, we will surely win.