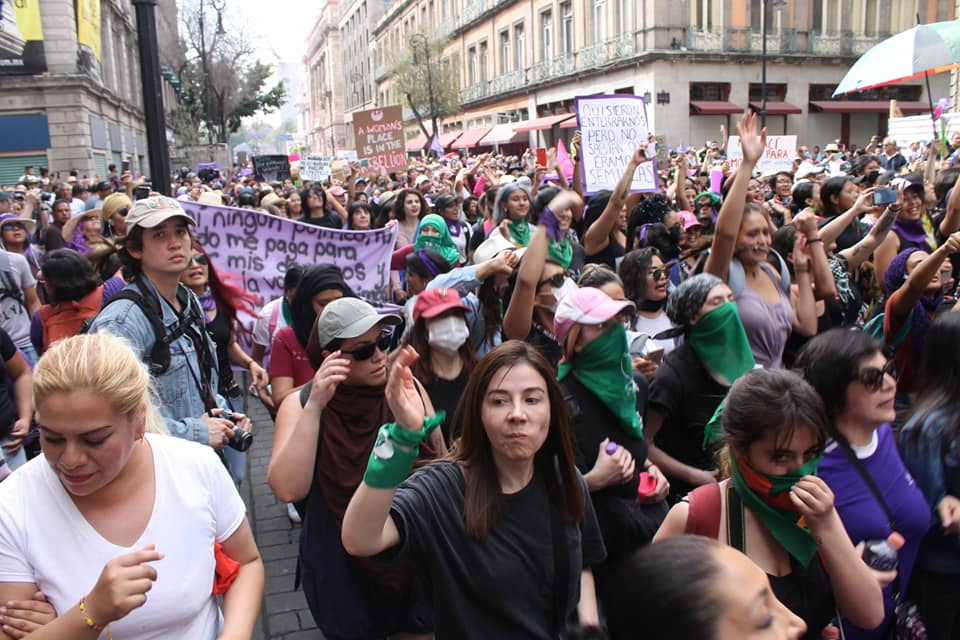 The following statement was issued by the Revolutionary Women’s League (Liga de Mujeres Revolucionarias) prior to the Women’s Day protest and strike of 8-9 March in Mexico, which have brought hundreds of thousands of women onto the streets in protest against violence and for women’s rights.

Violence against women in Mexico is the ultimate expression of the decadence of the capitalist system. Wage slavery under the current system takes an even cruder form for women; if capitalism represents submission, exploitation, and violence for the working class in general, for women workers, it is a double burden.

Every day, there are 10 femicides, adding up to more than 3,700 cases from the year 2015 to today; close to 20 percent of women over 15 years of age have suffered physical violence by partners, in 64 percent of cases considered severe or extremely severe. 65.5 percent of women feel unsafe in markets, 62 percent in parks, almost 40 percent at school and work, 73 percent in the street, 17 percent on public transportation and 87 percent on the road.

In the sphere of labour, the situation isn’t much different. The wage gap between men and women is at 16 percent, unemployment for women is double that of men, and for every 100 pesos that men receive in retirement or pensions, women receive only 98.

76.4 percent of women do domestic work, in comparison to 23 percent of men. This unpaid labour represents a second shift for millions of women. The value of such work was about 5.5 billion pesos (about 283.4 million USD) in 2018, representing about 23.5 percent of the Gross Domestic Product of Mexico.

In addition to that, the ruling class and most reactionary elements of society attempt daily to subject us to their hypocritical morality, diffused by the media and the church. There they tell us that we should resign ourselves to this condition of violence and inequality, for the simple fact that we are women.

Owing to this situation, and the unsustainable social and economic crisis into which the system is entering, millions of women across the nation are openly questioning the social, economic, and moral basis of the existing society. Our country is no exception; this 8-9 March, women around the world, starting with the youngest and most combative, will once again take to the streets to declare “enough is enough!”

The origins of 8 March force us to recall the historic struggle of women against oppression, but also that against capitalist exploitation. Today, the institutions of the state, media, and ruling class itself, want us to forget the day’s socialist origins, its definite class character and revolutionary significance.

In 1910, during the second International Conference of Socialist Women in Copenhagen, Denmark, Clara Zetkin brought forward, in front of more than 100 delegates from 17 countries, the proposal to commemorate International Working Women’s Day.

The occasion for this was an event which took place in 1909, known as the “Uprising of the 20,000,” in which thousands of women garment workers in the US went out on a general strike to demand a decrease in working hours, an increase in wages, and union rights.

In 1910 there was another call to a day of struggle for better conditions of life, the elimination of child labour, and the right to vote. In light of these events, the Socialist Party of the United States agreed to recognise the last Sunday in February as “National Women’s Day.”

The socialist women of the world adopted the resolution, and made it an international initiative. On 19 March 1910, millions of working women all over the world took to the streets to demand political rights and better living conditions, recalling the European Revolutions of 1848.

In the years 1913 and 1914, before the outbreak of the First World War, millions of women protested in the month of March against the rapaciousness of their imperialist governments and the war. In countries such as Russia and Germany, this was officially commemorated on 8 March as Women’s Day.

On that same day, in the year 1917, a massive movement of women began, demanding bread, and rapidly turned into expressions of repudiation of the monarchy, the war, and ultimately a revolutionary outbreak, which put an end to the Romanov dynasty.

Following the triumph of the October Revolution in Russia, the People’s Commissariat for Social Welfare officially declared 8 March to be Women’s Day.

Starting from these events, which have an openly revolutionary and socialist character, 8 March was popularised as Women’s Day, and the ruling class and bourgeois governments want us to forget its origin.

Now that millions of women around the world and in Mexico are beginning to organise, take to the streets and fight, we consider it important to reclaim the original ideas of International Women’s Day, and put a stop to the institutionalisation of our day of struggle.

The actions of 8-9 March

On 8 March, thousands of women will take to the streets. From this very moment, we will breathe the radical atmosphere, which will overflow onto the streets. The youngest women (students), have set an example for us, they have burst onto the public scene questioning the entire establishment. The protests have been extended to the National Autonomous University of Mexico, the Autonomous University of the State of Mexico, and expressions of discontent and legitimate anger have also occurred at the National Polytechnic Institute and State Universities.

We also see protests and actions against every femicide and every act of barbarism against women. Something very profound is being born at the national level from our struggle against gender violence, femicide and harassment.

From our point of view, we must avoid falling into two extremes: on the one hand, we must denounce the opportunistic attempts by the reactionary right to co-opt our legitimate demands, we must say strongly and clearly that they have been enemies of the most basic rights of women and the demands of the working class.

On the other hand, another mistake has been spread in various spaces and social networks, by female and male comrades sympathetic to the current government, that the right-wing is promoting the 8-9 March actions. This analysis obscures the fact that the movement stemmed from the issue of gender violence, which even under the new government has not been eradicated. Such a view, even when it claims to unmask the right, only strengthens it, because it assigns to it a political weight and strength that it currently does not have. In addition, this vision diverts leftist activists away from street action and organisation from below.

On 8 March, we must promote united action of women, and all the oppressed and exploited

The call for a strike on 9 March has been institutionalised, so that even the army and the navy have said they will join the action. These, alongside the university authorities, the reactionary Mexican Employers Association and bankers are all hypocrites! These people have never been interested in our rights, groups like these with their medieval discourse promote the hypocritical morality of capitalism, which subjects us to some of the most intense oppression suffered by wage slaves under the current system.

The bosses and university authorities that are promoting a general strike today are the same people who protect harassers and violate labour rights every single day. Our action on the 9th should also be targeted at them and declare: “you are not our allies!”

For our part, we believe that the 9 March strike should not be a call to stay at home. Such a call is ultimately conservative, as it promotes passivity. Strikes have been the historical method of the working class, and so we must reclaim it, shut down the schools, offices, factories, invite our co-workers and classmates to come together, in order to organise and to protest, to make our anger felt in the streets. This protest must be led by women, but in unity with all the oppressed and exploited in society.

For a revolutionary women’s movement!

Those who want to join the cause of struggle against violence and femicide, against gender violence and the oppression of women, consequently must declare themselves to be anti-capitalist and revolutionaries. The origins of inequality, exploitation, and oppression are not limited to unjust laws or a chauvinist, misogynistic culture (which we agree must be fiercely combatted), but is a deeper structural problem: that society is divided into classes. 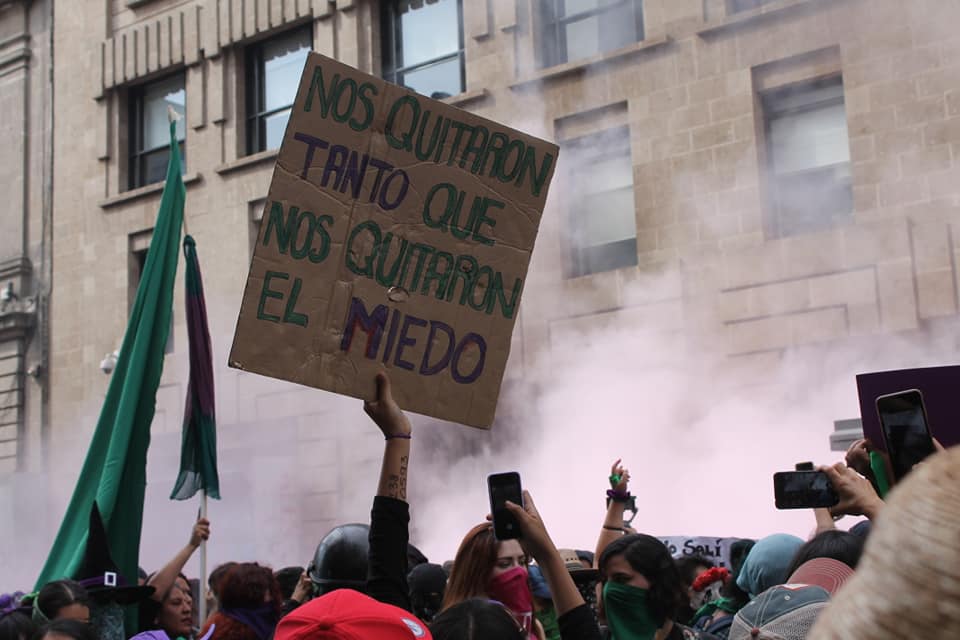 "They took so much from us that they also took our fear!" / Image: LMR

With this, we don’t mean to repudiate the immediate struggle for rights and democratic demands, like the right of bodily autonomy and other democratic rights of women, we are in fact the most ardent promoters of such demands.

But we women students and workers, who support the Revolutionary Women’s League, have raised the banner of struggle for our most basic rights, and at the same time, that of a conclusive struggle against the capitalist system.

The cry of thousands of women has resonated and shook the conscience of even the most conservative sections of society, facing everyday violence, inequality, and oppression: “everything must burn!” This has instinctively brought thousands of women closer to revolutionary positions.

We say, everything must burn! Oppression, exploitation and capitalism must all burn! And our struggle is in common with the working class that makes society run.

Are we not the force driving all transportation, industry, commerce, schools and offices? Meanwhile, there’s a parasitic minority of exploiters and oppressors, of high state officials, businessmen, bankers, and the high priests of academia.

Are we not the ones who construct all manner of buildings and great palaces, and generate all of society’s wealth? While we and our families are forced to live in a society full of violence and inequality.

Comrades, let the cry of “everything must burn!” be accompanied by a call for women to organise, together with the exploited and oppressed, to tear down this political and economic system, which condemns us to inequality and violence, and to build a more just, egalitarian and dignified society, where life is worth living.