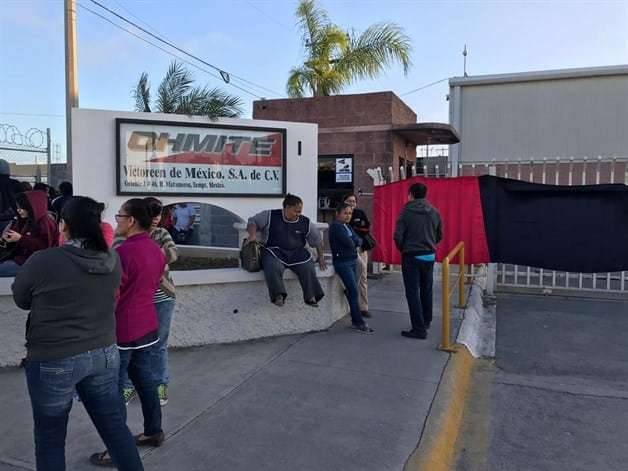 Mexican workers from 45 "maquiladoras" (factories) in Matamoros, Tamaulipas have gone on strike, having received no information from trade union leaders linked to the Confederation of Mexican Workers (CTM) concerning negotiations over annual salary increases. The workers demand an increase of 20 percent and a compensation bonus. On Sunday 13 January, 2,000 workers in Sonora called a strike because their employer, the Levolor company, did not respect the wage increase decreed by the federal government in its adjusted salaries and benefits.

Heroica de Matamoros is the second-most-populous municipality of the state of Tamaulipas. Its population exceeds half a million people, it is located in the mouth of the Rio Bravo and is adjacent to United States border cities. According to the National Institute of Geographical Statistics (INEGI), it has some of the highest economic growth in the country. Its economy is mainly based on trade with the United States and is a site of major industrial development due to the presence of the factories in the region.

It is home to 122 companies dedicated primarily to exporting commodities to the United States, including cables, electrical components, parts and accessories for vehicles, textiles, chemical products, machinery and computer products. According to figures from the municipal government, investment in the the maquiladoras in Matamoros stands at around $60 million. Although the bosses’ profits are likely far greater than this.

The municipality of La Heroica de Matamoros is key to the maquiladoras industry not only at the state level, but at the national level. The "maquiladoras model" consists of preparing and assembling pieces of merchandise that are destined for their country of origin, mainly transnational corporations with US capital. In the beginning, companies operated with very rudimentary technologies. These days, we are not talking about small workshops installed on the northern border, but large companies of hundreds or thousands of workers, who have invested in training and some technological development to accelerate production and increase profits. Last year, the Innovation Center was inaugurated by the bosses for this purpose.

However, this model irrefutably reflects the total dependence of the Mexican business elite on the imperialist bourgeoisie, and of the United States in particular. Technological innovation and the training of the maquiladoras workers are not intended to develop national industry, but to perpetuate the maquiladoras factory model as an appendage of the large transnationals and international capital.

The government in turn offers (as an "attraction for investors") a policy of low wages and deplorable working conditions in the municipalities in the north of the country, including Matamoros.

These factory workers face precarious working conditions and low wages. In Matamoros, the average monthly salary in the maquiladoras ranges from $190 to $337.60 per month, depending on the function that the worker performs in the company. On average, the salary in the municipality is 30 percent lower than the national average.

The recent workers' protests express the accumulation of discontent amongst these workers, and their desire for a better life through organised struggle.

The strength of the working class

Suddenly, the strike has become the central focus of local media coverage and some national news outlets. Thousands of workers from maquiladoras went on strike simultaneously across dozens of factories in the municipality of Matamoros, demanding from their union leaders (mostly controlled by the Confederation of Workers of Mexico) clear information on the negotiation process over Collective Contracts and salary increases for this year.

More than 40,000 striking workers, the majority of the employees in all the maquiladoras in the municipality, called a demonstration on 12 January at their union offices and are preparing a general workers' meeting to coordinate the struggle for their demands.

More than 80,000 workers are employed in the maquiladoras, which generate 25,000 indirect employment sectors, and represent 80 percent of formal employment in the region. This is the real strength of the working class, upon which rests the functioning of the economy and society.

The strength of the working class lies not only in its numerical weight, but in the role it plays in production. It is the workers who operate the machines; and facilitate transport, industry and commerce. Even most of the tasks of operating the offices of the state fall to the workers. In short, not a lightbulb shines nor a wheel turns without the kind permission of the working class.

The workers in Matamoros are getting valuable, first-hand experience of the need for leaders that observe to the interests and aspirations of the workers and not those of the employers. In some sectors, the role played by union leaders has been questioned, and some workers have hinted at the need to democratically elect leaders who are really willing to fight, and remove those who are not. "There cannot be rich union representatives and poor workers", was one of the slogans of some striking workers.

An important step would be ensuring that the next general assembly of the workers is attended by delegates elected by assemblies of striking factories in a direct and democratic fashion. These delegates would be willing to join the struggle and extend it, so the workers’ demands are met.

The struggle of the workers in Matamoros demonstrated the strength of the working class. We must mobilise solidarity campaigns and support their struggle, not only in the municipality, but at a national and international level.