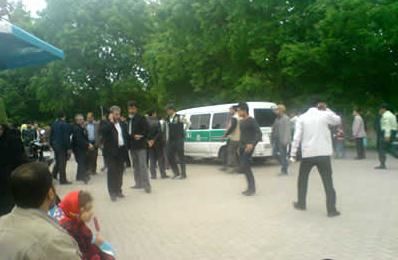 Forty-eight days have passed since the suppression and arrests of the workers’ gathering on International Labour Day - May Day. During this time important events have taken place and have caused widespread and amazing changes in the social movement of the country. Here we publish a message and a list of demands of the Free Trade Union of Iranian Workers.

Forty-eight days have passed since the suppression and arrests of the workers’ gathering on International Labour Day - May Day. During this time important events have taken place and have caused widespread and amazing changes in the social movement of the country.

During their televised debates the presidential election candidates accused each other of violating the citizens’ rights, embezzlement, theft, mismanagement, and incompetence. But none of them had any objection to the laws that have allowed the disastrous events affecting the majority of the population. None of them had any objection to the law that takes away a worker’s right to strike, sets his wages at a quarter of the poverty line, takes away his right to [form] organisations, allows mass lay-offs, the signing of blank contracts and forces a one-month temporary contract on him.

On the issues of the freedom of speech, the freedom to dress [as you choose], and tens and hundreds of inhuman case that today govern society, they did not say a word, and if they did point to cases in a superficial way, every one of them was an attempt [by the candidate] to clear himself and accuse the other, as if his opponent has been more strict than himself. In all those debates, clearly and in confronting each other, the candidates themselves proved that they accept all the present laws and conditions and that their only quarrel is on snatching power from their opponent.

Therefore, we workers, under the present conditions, when social protests have taken the form of a mass and huge movement that has come on the scene to achieve its demands, it is our right to turn the leaflet with the demands of our fellow working class people, into our banner and to raise it. These demands are as follows:

Workers! Today we have a duty to intervene, to pose our demands independently and by relying on our own united strength, together with other sections of society, to work towards achieving our human rights.