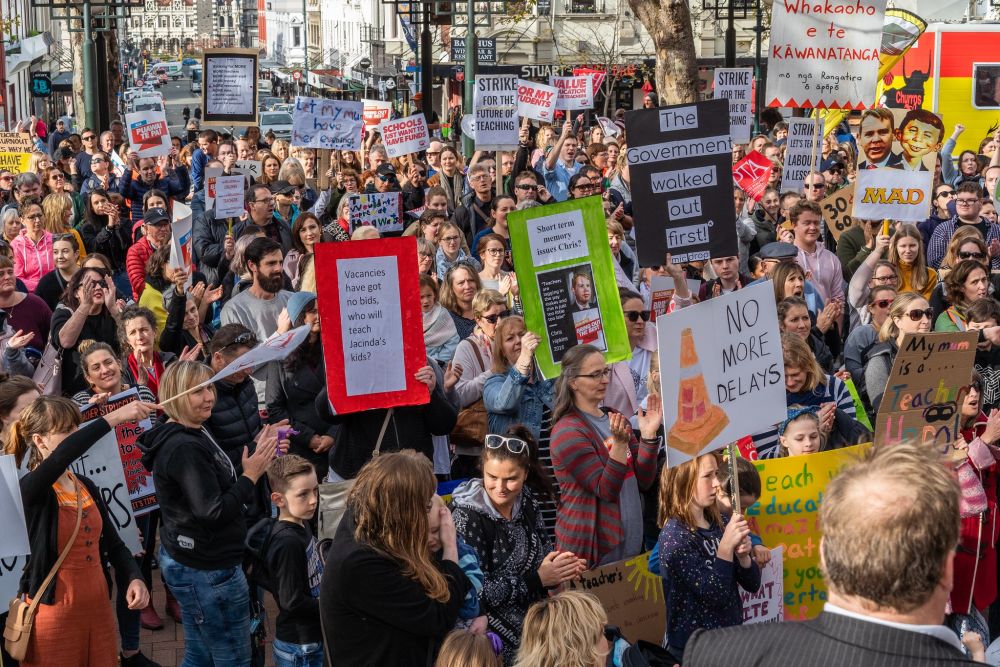 Strike action was taken by over 50,000 teachers throughout New Zealand on 29 May to demand a 16 percent pay increase and improved working conditions. Their strike is the result of a breakdown in pay talks between the New Zealand Educational Institute, the Post-Primary Teachers Association; and the government Ministry of Education.

While the government offer of 3 percent a year for three years may sound generous, it is worth pointing out that most teachers would not earn enough to put them even close to the top 10 percent of earners (as erroneously claimed by Minister of Education, Chris Hipkins). It also does nothing to address retention of teachers in the profession, nor would it improve workplace conditions in order to give teachers the time to do their jobs properly, and ensure teaching is a viable, long-term career.

Hipkins retorted by claiming the offer is the largest teachers have had in over a decade and one of the largest across the public sector. He said the pay offer would result in an extra $10,000 a year for primary school teachers, with secondary teachers earning slightly less. However, most teachers dispute this $10,000 increase, saying that the proposed increases amount to far less.

"It's important we sit around the negotiating table and work this out, nothing is going to be achieved by going on strike (...) "We're never going to be able to solve every problem overnight, these problems have been over a decade in the making. Teachers have got high expectations of this Government and that's fine, I'm happy to live up to those expectations as long as they're reasonable."

This is a typical response of a Labour government working within the limits of capitalism. The government has already decided what is a reasonable pay rise and the government negotiators hoped that the out-of-touch union leaders would meekly accept the offer, as in the past. But the members have had enough and are prepared to fight. The rank-and-file workers are not only fighting the government but also their union leaders, who were trying to hold them back from taking action and pursuing their claim. Teachers, quite rightly, expect more from their union leaders and Labour in government.

Labour, wages and the cost of living

While it is a commonly held belief that teachers are well paid, the salary of a teacher with a bachelor’s degree in teaching is capped at $71,891 a year before tax. To put this in context, if they were to apply for a Welcome Home Loan, set up by the government to help first-time buyers, they would only be able to borrow $416,000. According to the realestate.co.nz website, there are only 44 properties in Greater Auckland selling for that price. In the Wellington region, there were 33 listings (as of 13 May).

This goes some way towards showing what a farce wages really are in New Zealand. Increasingly, even people deemed to be well off by the capitalist media and the Ministry of Education cannot even afford to buy a home in the very areas where demand for housing and teachers are highest.

There is also a great deal of ignorance as to what teachers do as part of their jobs. When they are not in front of the classroom teaching our children, they are marking homework and exam papers, filling out a seemingly endless string of administrative paperwork for the public service mandarins in the Ministry of Education, and taking part in extracurricular activities outside of the classroom, such as supervising children during school trips.

Considering the almost-ceaseless claims of the current Labour-led coalition government that it is making the well-being of children its top priority, it is increasingly obvious that this is far from the case. By offering those whom parents entrust with the education of their children a pay offer that looks good on paper, but ignores the high cost of living and housing in most of New Zealand, is an insult to the teachers.

Thus, it should be no surprise that 55,000 teachers went out on strike on 29 May. However, a mega-strike by teachers is not enough. While it is a step in the right direction, the leadership of the New Zealand Education Institute and the Post-Primary Teachers Association, as well as other trade union leaders, must actually lead! 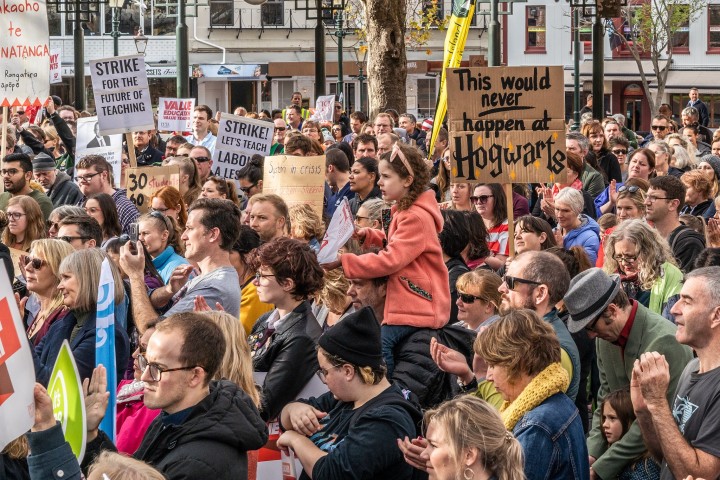 In order to carry the strike forward, the union leaders must generalise and co-ordinate strikes across all industries. The teachers need solidarity and proper leadership! / Image: Flickr, Mark McGuire

It is notable that, under the last National-led government, the teachers' unions leaders (and other unions leaders) would not seriously challenge the government's austerity measures, which worsened teachers’ pay and conditions. The union leaders told members to wait for a Labour government. Now we have a Labour government, the union leaders have actively tried to undermine the members’ demands for a 16 percent rise and improved working conditions, which they claim are unrealistic!

Also lacking is the leadership of the CTU. The CTU has been missing in action and has hardly said anything about the growing militancy of workers. The CTU must lead a generalised, militant campaign and support all workers in struggle for better pay and conditions. It is utopian to think that the way to deliver improved living standards for workers is with more class collaboration. The reason for ingrained low pay across all industry sectors is precisely the class collaborationist policies pursued by the unions in the past.

The CTU (and the teaching unions) must reject the policies of class collaboration and adopt a militant, socialist position if they are to deliver better living standards for workers. The CTU must also generalise and co-ordinate the strikes breaking out across all industries if meaningful pay rises are to be won. Building such solidarity will reinvigorate the unions, as workers join and get active in their unions. If this is carried out, it would be possible to build a one-day general strike to win the demands of the teachers and other workers in struggle, and to put the government and employers on notice.