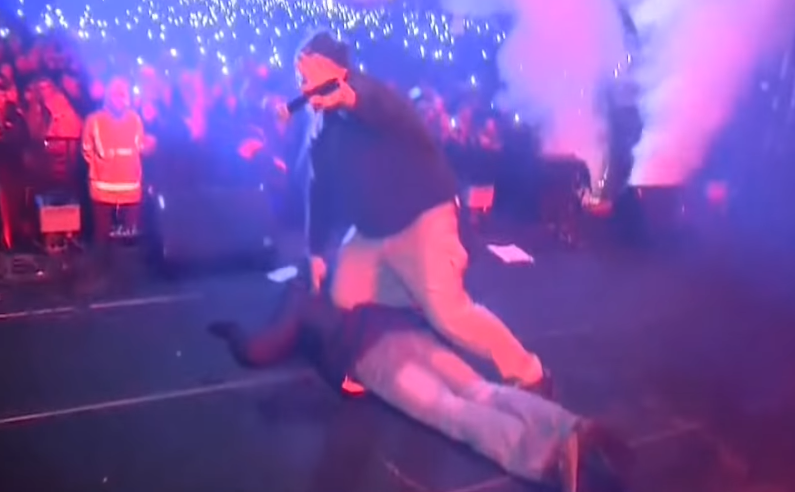 A wave of deep consternation shook Poland on Sunday 13 January. A well-known, liberal politician and mayor of the major coastal city of Gdansk, Pawel Adamowicz, was stabbed on stage in front of hundreds of people. He died in hospital the following morning. Adamowicz, who had been the city’s mayor since 1998, was taking part in the biggest annual charity event, the Great Orchestra of Christmas Aid, as he was stabbed in his chest repeatedly by a raving terrorist. Many are in a state of disbelief, as this is widely considered to be the most serious political assassination since the murder of Polish President Gabriel Narutowicz in 1922.

This is a reminder that any notion of a “peaceful democracy” is an abstract illusion under capitalism. The present decay and crisis of the system creates the most favourable conditions for the growth of all sort of degenerate scum in society, which develop in the same way that decaying corpses become infested with maggots.

After the stabbing, the perpetrator, a convicted bank robber, rushed to the stage microphone. Before getting tackled down, he proclaimed, with the blood-stained knife still in his hand, that the Civic Platform (a party of which Adamowicz was a former member), which was in power during his prosecution, had wrongfully convicted him to a jail sentence for a crime he did not commit. He also alleged that, whilst in prison, he was subject to all sorts of torture.

Degeneration of the Polish right-wing

The act was widely condemned throughout society, including by the leaders of the ruling Law and Justice party (PiS). President Duda and Prime Minister Morawiecki are aware that this situation could reflect badly on them, as millions are currently beginning to question what kind of country Poland is becoming. They have therefore attempted to put the genie back in the bottle by using the fact that the assassin is allegedly schizophrenic, to claim that this act was not politically motivated. In spite of this, many keep pointing their fingers at the PiS, and especially at their more extreme darlings, who are either closely linked with or are officially members of various far-right groups.

It cannot be ruled out that, while killing Adamowicz, the attacker had lost all sense of reality. This possibility is currently being investigated by professional psychiatrists, in order to work out whether the 27-year-old attacker known as Stefan can be prosecuted as a conscious perpetrator. However, even if this was the case, many questions remain unanswered. It has been revealed, for instance, that the assassin has been treated for mental health issues before and after he committed bank robberies. But perhaps this treatment would be more successful if the mental health services weren’t chronically underfunded. The Polish government currently allocates about 3.5 percent of its total health budget to psychiatric treatment, compared to 14 percent in Germany. Details of how this person was treated for his illness while in prison have not been disclosed, but Polish prisons are certainly a far cry from being exemplary rehabilitation facilities. Perhaps the claim of “torture” bears a grain of truth, reflecting the accelerating downwards spiral of Stefan’s mental health while in prison. A combination of all these factors, coupled with the toxic, bitter, slanderous, accusatory and violent language of the Polish right wing, cannot be overlooked in determining why this individual murdered Adamowicz. 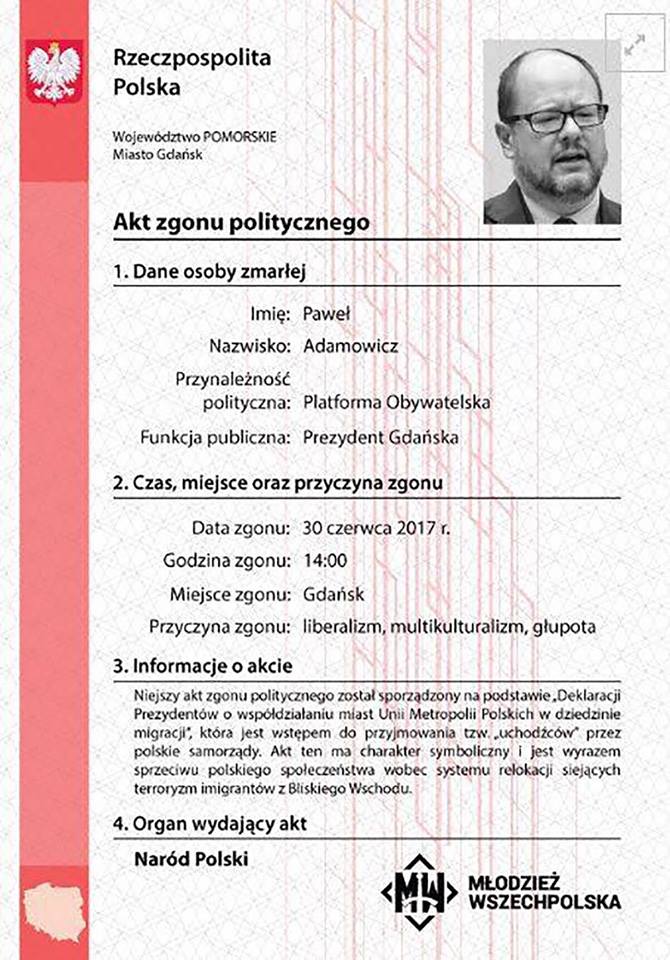 Prior to Adamowicz's murder, the far-right, All-Polish Youth released a “political death certificate” listing his “cause of death” as “liberalism, multiculturalism and stupidity” / Image: public domain

It is clear that attempts to limit the perpetrator’s actions to his mental health problems would not relieve the right wing in and around the PiS from responsibility. Organisations such as the National-Radical Camp and the All-Polish Youth have for years been using slogans such as “Death to the enemies of fatherland!” on their banners and in their chants. In 2017, a number of Polish mayors, including Adamowicz, signed a statement proclaiming that their cities will welcome Syrian refugees. In response, the All-Polish Youth released a portfolio of “political death certificates”, in which one of those listed was Adamowicz. In this “document”, his “cause of death” is listed as “liberalism, multiculturalism and stupidity”. Adamowicz and other mayors attempted to have the All-Polish Youth prosecuted for their threats, but were subsequently left disappointed at the way the police handled these investigations (or more aptly, did not handle them). The Wroclaw court simply stated that these certificates are just “an expression of political views”.

This in itself is a telling indicator of how much willpower the bourgeois state is willing to put into fighting fascism. In fact, there is a slender possibility that the state will pretend to take a more serious stance against far-right extremism in the aftermath of this fatal stabbing. It would do this in an attempt to contain the growing anger of millions of Poles before they start taking the matters of settling scores with fascists into their own hands. But even if that happens, it will not represent a decisive shift by the state against the far right. They are still thriving, and unchallenged.

However, the far-right and fascist grouplets are not the only thing the PiS leadership lacks control over. For example, Krystyna Pawlowicz MP, possibly one of the most controversial PiS figures, refused in her tweets to offer condolences towards Adamowicz’s family. She instead addressed the chairman of the Great Orchestra of Christmas Aid charity, Jurek Owsiak, who is known for his anti-PiS views:

“Owsiak has to leave, because his playing people off against each other… will end badly. Owsiak HAS to leave… for the safety of others”.

The tweets were soon deleted, but Owsiak did resign from the position he held since 1993, that he was very closely identified with. In his resignation letter, he stated:

“This hate, which exists inside people, has exploded in an extreme way… Maybe my resignation will help those who even today could not stop themselves from writing loathsome things about me. Have a look at right-wing media portals...”

The state-owned TVP channel, known for its borderline fanatical loyalty to the PiS, has broadcasted a newsreel on the evening after Adamowicz’s assassination, in which it clearly tried to blame the Liberal opposition. This has caused widespread disgust, which also affected layers of ordinary PiS voters. Even the usual cheerleaders of the PiS, such as journalist Rafal Ziemkiewicz and other individuals in the TVP department, are expressing their disappointment at the “insensitive” TVP newsreel. On Wednesday, Kaczynski, the man who pulls all the strings in PiS, along with a few other MPs, did not bother to turn up to the minute of silence organised by the Sejm (the lower chamber of Polish parliament). This has added more fuel to the fire. 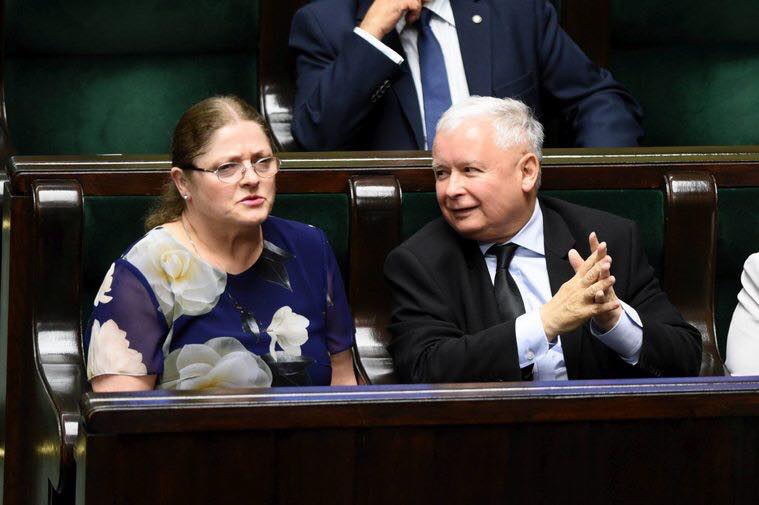 A point of no return

President Duda and other PiS leaders have retreated from taking part in or endorsing a march in memory of Adamowicz. The victim’s family asked not to politicise the death, and Duda decided to use this to de-escalate the position taken by the right wing. Duda is echoed by Wlodzimierz Czarzasty, the leader of the Democratic Left Alliance, stating that “now is not the time to score PR points”. However, many are correctly seeing this murder as a logical conclusion of the toxicity of the PiS and the right wing as a whole, and see these “apolitical” statements as hypocritical attempts at washing their own hands clean.

The event has deeply affected the entire country. Huge crowds have attended mass rallies in practically all cities and many smaller towns across the country:

The mood at these rallies was akin a funeral, both for Adamowicz and for any sense of stability or normality in the country. The degree of political polarisation in Poland is directly proportional of the depth of this crisis, after which things cannot simply go back to normal. On the eve of capitalist restoration in 1989, people had many different ideas of what Poland would look like in 30 years’ time. Not many, however, imagined that in 2019 Poland would be riddled with the kind of social, economic and political contradictions that were last seen in the interwar period.

The crisis of capitalism is expressed through many symptoms. Capitalist restoration in Poland and in the rest of Eastern Europe has meant accumulated wealth and plenty at one end of society, whereas at the other end it has amassed intense poverty, misery and depression. 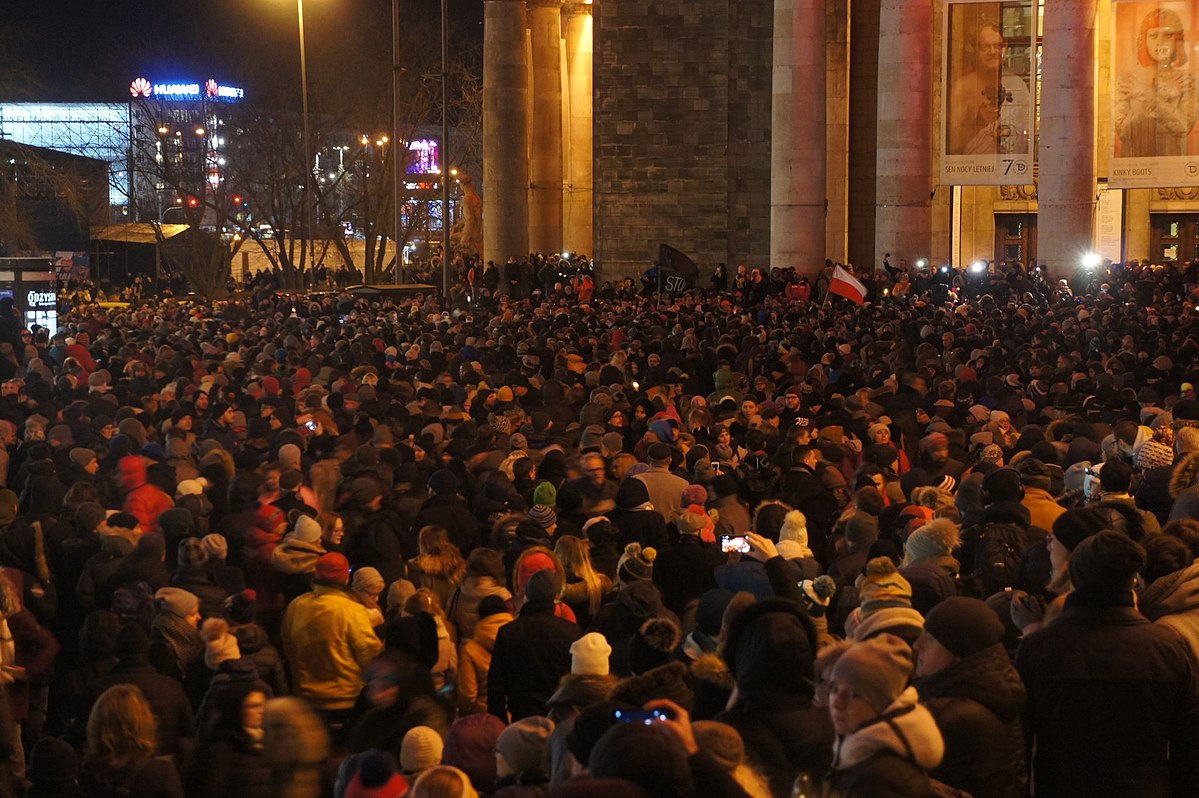 The vigils on the Monday after the assassination saw huge crowds participating around the country / Image: Tadeusz Rudzki

The last few months have brought stormy clouds over Poland’s future. The EU and private investors are withdrawing from Poland in serious numbers in response to its political instability. The partial shield represented by foreign investment, which saved the Polish economy from the worst of the 2008 crisis, is now being pulled away. The next slump will see Poland as one of the worst affected economies. The murder of Adamowicz may go down in history as a mere prologue to the violent turmoil that will unfold in the next period.

The only progressive thing that will emerge from this scenario is the movement of the working class: the only force capable of changing society and consigning fascist violence to the dustbin of history, along with the capitalist system that creates it.

The vigils on the Monday after the assassination saw huge crowds participating around the country. The social composition of the demonstrations was mostly petty-bourgeois, but they also reflected the instinctive reaction of many Polish workers against fascist violence. The sort of crowds we saw there would be multiplied manifold if the fascists were to directly attack the working class itself. The Polish working class has not mobilised decisively over the past decades, but at the same time it has never been stronger in any other period in its history. Polish workers are in the process of delivering a very harsh judgement of the PiS government and the right wing as a whole. The ground is being prepared for a complete transformation of the situation, in which the working class will be pushed onto the stage of history.