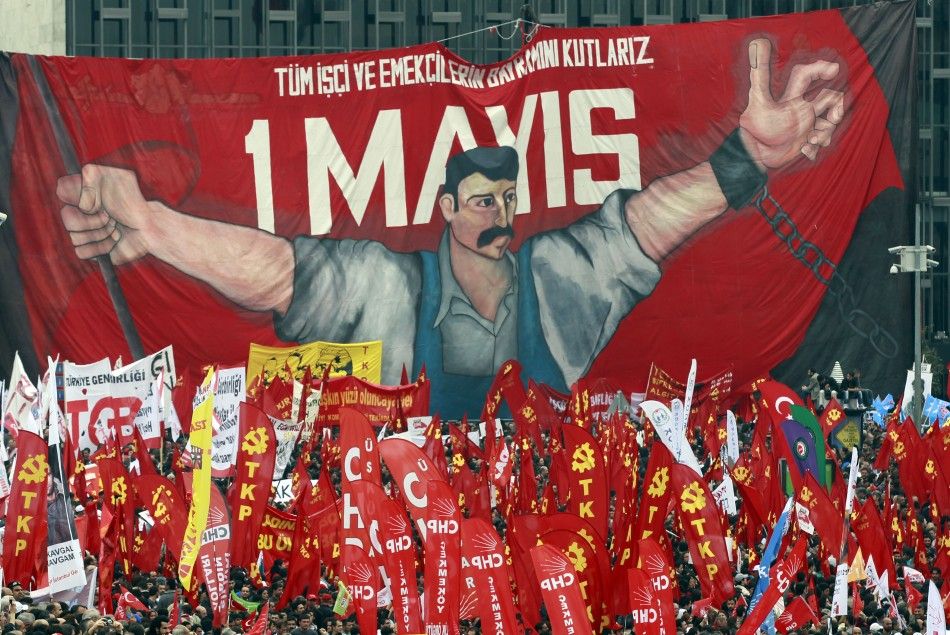 As millions of workers and youth take to the streets world-wide to celebrate May Day as a day of international working class solidarity, we need to reassess our common objectives in the light of a growing world crisis of capitalism. Originally written in 2001.

For over 100 years, tens of millions have expressed their determination again and again to rid the world of oppression, war and poverty. The victory of the Russian working class in October 1917 marked an enormous advance in the struggle for the socialist transformation of society. It represented a beacon to the workers internationally.

Today, internationalism has never been so relevant. With the collapse of Stalinism and the wholesale conversion of the Russian bureaucracy to capitalism, US imperialism has become the dominant reactionary force on the planet. However, this colossus has dynamite built into its foundations, as it is forced to intervene repeatedly against the oppressed peoples of the world.

As global capitalism extends its fields of exploitation, so workers are forced to organise to defend themselves from the Philippines to South Africa, from South Korea to Argentina. In Britain, following the avalanche of job cuts over the last few months, the closure of the Motorola plant in Bathgate, West Lothian, with the loss of over 3,000 jobs, is the latest attack on workers by international capital. But this is the thin edge of the wedge. Already 100,000 jobs have been lost in the telecommunications sector as profits plunge and investment grinds to a halt. The gyrations on the world's stock markets are a reflection of the crisis affecting world capitalism.

Increasingly, as the crisis develops, workers need to arm themselves with a programme that can answer their needs and aspirations. In doing so they need to reclaim May Day's tradition of struggle. May Day itself was born out of struggle. The fight for the 8-hour working day in the United States in the 1880s was the issue that gave birth to May Day as International Labour Day. In 1884 the Convention of the Federation of Organised Trades raised a resolution that was to act as a beacon to the whole working class: 'that 8 hours shall constitute a legal days labour from and after 1st May 1886.' This call was taken up by the Labour movement with the creation of Eight Hour Leagues, which rung significant concessions out of the bosses, and witnessed the doubling of trade union membership.

Following a 25,000 1st May rally in Chicago, the bosses were determined to crush the militant movement. Police shot and killed for workers on a picket line two days later. However, a bomb thrown by an agent provocateur killed seven police, who responded by shooting several workers and injuring hundreds more. In the following weeks, the police carried out systematic raids on strikers and trade unionists, breaking up meetings with violence. Workers' leaders were framed and sentenced to death, but was later commuted to life imprisonment. 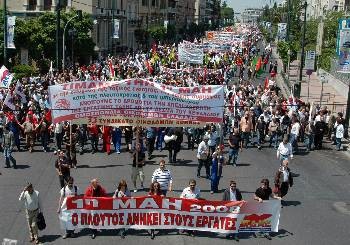 May Day demonstration in Greece 2008 Starting with the Chicago tragedy of May 1886, which became known thereafter as international workers day, workers representatives set up the Second International in 1889, under the banner of workers' internationalism. A key resolution of the Congress was that on every May Day workers in every country would strike and demonstrate for the 8-hour day.

On 1st May 1890 workers struck all over Europe, with 100,000 demonstrating in Barcelona, 120,000 in Stockholm, 8,000 in Warsaw, while thousands stayed at home in Austria and Hungary where demonstrations were banned. Strikes spread throughout Italy and France. Ten workers were shot dead in Northern France. In the words of the Austrian social democratic leader, Adler, "Entire layers of the working class with which we would otherwise have made no contact, have been shaken out of their lethargy."

In Britain and Germany, huge demonstrations were held on the Sunday following. Despite a failure to demonstrate on May Day, their importance was not lost on Frederick Engels, who had witnessed the political lull amongst the British Labour movement since the great Chartists days of the 1840s: "more than 100,000 in a column, on 4th May 1890, the English working class joined up in the great international army, its long winter sleep broken at last. The grandchildren of the old Chartists are entering the line of battle."

Since this time, many workers have died whilst demonstrating for an 8-hour day. Many years of working class struggle and resistance have followed and we proudly celebrate them on this date. But this is not enough!

Unfortunately for our class, we still bound by the chains of world capitalism. The workers have attempted repeatedly to change society, but have been held back by their leaders. That is why today, as socialists, we do not just celebrate class resistance but also acknowledge the scandalous role played by the trade union and Labour leadership. They have become 'the labour lieutenants of capital', only interested in 'sweet heart' deals and agreements with the bosses, to the detriment of the workers they supposed to represent. 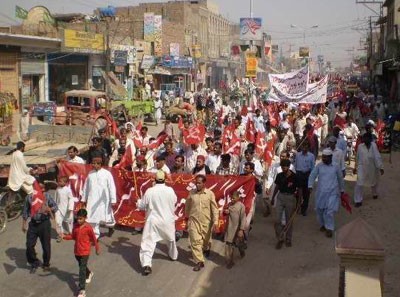 May Day demonstration in Sadiq Abad, Pakistan, 2007 In Britain, May Day has been largely ignored by the leadership of the official movement, in its search for respectability and class collaboration. At best, only lip service is paid to solidarity or internationalism. As a result, today's unions are failing to fight back effectively for our class.

The fight to regenerate the Labour and trade union movement is linked to the struggle for socialist policies. The Labour Party was created a century ago to represent the interests of the working class in parliament. Unfortunately, it has been taken over by the Blairites who want to turn it into a capitalist party. It is up to the rank and file, especially of the unions, to clear out the right wing and take back the party.

However, a clear alternative to capitalist policies must be put forward within side the workers' movement. No to class collaboration! No to Tory polices! For a Labour government on a socialist programme!

Only by taking over the "commanding heights" of the economy, the monopolies, banks and insurance companies, under democratic workers' control and management, can society be run, not in the interests of the millionaires profits, but for the needs of working people who create the wealth of society.

The future of today's Labour movement lies in the hands of its rank and file membership. We must begin to reclaim May Day's hidden past in an effort to create a real fighting alternative. Whether you are working, studying, or on the dole, May Day is OUR day! In the words of the Communist Manifesto: 'Workers of the World Unite!'