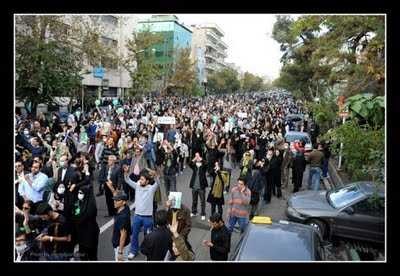 With some delay we received this report on activities in Iran on May Day. Our readers will see that there was a sizeable level of activity on the day, but most importantly that the key issue of the role of the working class is being discussed widely among activists and workers and youth in general.

This year May Day, international workers’ day, was celebrated throughout the world, in different forms and to differing degrees. The crisis of capitalism meant that in general we saw a heightened atmosphere of activism and militancy in many countries. It is clear now that May Day has opened its way also into North America as well with major events happening in both the US and Canada.

In the Middle East we also saw big celebrations of May Day, with one of the most significant in Turkey where this day has traditionally been a battleground of workers with the state. Turkish workers, for the first time, successfully marched in Taksim Square, right in the centre of Istanbul.

But in few countries around the world was May Day treated as a crucial political day as it was in Iran.

Movement looks up to workers

The revolutionary movement that shook Iran in summer 2009 still continues, although in a temporary period of lull. In the early stages, the movement used to follow up its action by demonstrating on major days: these were a rendezvous for demonstrators and the movement. So we saw massive demonstrations on days like September 18 (“Quds Day”), November 4 (“Anniversary of US embassy occupation”), December 7 (“Student Day”) etc. This trend led to disappointment for the movement when the regime, having learnt the tactics of the protesters, countered it on February 11, anniversary of the 1979 Revolution, where the movement had hoped to score big.

However, it is interesting to note that this disappointment and “defeat” actually had the positive effect of making the youth and activists of the movement think. And it is fair to say that more and more they are coming to the same conclusion as the Marxists. We said, at the time: “the movement needs its local organizations and central leadership and direction in order to succeed.” And we added: “This [thinking about how to progress] can also lead them to look upon the only social force that could best topple this regime: the working class with a general strike.”

This was precisely the atmosphere within the movement in the days prior to May 1. The movement looked up to International Workers’ Day as a possible opportunity to re-launch the movement on a higher level. For a while, everywhere the working class and its power was the topic of discussion. It is fair to say now that a large number of those who associate themselves with the Green movement see the problem as “lack of the presence of the downtrodden in the movement”. This was even reflected among those at the top. Khamenei, Rafsanjani, Mousavi and Karoubi were in a race to bestow praise on the workers, understanding it was the topic of the day. They all suddenly discovered how important the workers actually are.

Mr. Dictator himself, Ali Khamenei, warned about “Using workers’ issues as a lever for political pressure” but this did not stop Mousavi from an attempt to link up workers’ demand with the political movement. He said: “What do workers and teachers want?... They want development of the country... they want freedom... they seek justice... they oppose corruption”. Mr. Mousavi protested against the rise of inflation, decreases in investment, closing of factories, the rise of unemployment, the non-payment of wages and said that workers know that their day-to-day affairs are linked with government attempts at limiting the media, jailing political prisoners and limiting the activities of trade associations and political organizations. Although Mousavi’s calls show the weight of the working class, which no one can ignore, there is great danger in following the path he is proposing. To fight for reforms without challenging the whole of the Iranian state and military apparatus is not only a utopian dream it is also a direct road to demoralisation and, through that, bloody defeat.

Yes, it is evident that Mr. Mousavi, Khamenei and those at the top understand very well the might and power of the working class. Since the very beginning, they have worriedly looked upon them and know the potential of the workers going into action. Sadly enough, this is not true of many on the left or even in the workers’ organizations themselves.

At the end, May 1, 2010 did not become a breakthrough that it could have been, but it definitely led to a step forward, it’s most important fruit being a weeks-long discussion and awareness on the important role of the workers.

May Day: Workers and students against the regime

As we said, Khamenei himself had warned against May Day and the regime did its best to stop anything from happening. Unlike every previous year, even the sham government trade union, Khaneye Kargar (Labour House) did not get permission to march on May 1 (as it does every year).

The police and military imposed the most severe security precautions in the big cities, especially along the declared paths of the demonstrations. One of the reports from Tehran said:

“Also visible was the strong presence of Intelligence Ministry people with their black vests. In the normal situation next to any group of police there was a plainclothes agent, too.”

These security measures did not stop the workers’ organizations from celebrating the international day of their class. Ten workers’ organizations (including Trade Unions of the Bus workers in Tehran and Sugar workers in Haft Tapeh) had welcomed May Day with a good resolution that not only pointed to the capitalist system as the main enemy, but also had good political demands such as Freedom for all political prisoners, Abolishing torture and execution, Equality of women and men, Children’s Rights, Freedom of organization and political parties, etc.

On the day itself we saw May Day events happening all over the country. This was probably the most geographically diverse celebration of May Day in recent years. Workers celebrated their international day all over the country from Tehran to Shiraz, Ahvaz, Tabriz and all over Kurdistan. Different cities saw different events: Tabriz workers demonstrated in front of the Labour Department; Shiraz workers in front of the Fars Province house; and in Qazvin in the Yadegare Emam Stadium.

Students mobilised as well and protested against the presence of Ahmadinejad who had come to Tehran University on the occasion of “Teachers’ Day” (which is on May 2). Some commentators said that the period of lull in student action, that was prevalent after February 11, was broken with Student May Day events that were organized with the slogan of “Worker, Student, Unity, Unity”.

It can be said that this May Day was the first in the recent years that saw the participation of not only workers but the bulk of the people. Previously it was mostly worker activists and socialists who were interested in celebrating May Day. This year we saw the presence of masses of workers, ordinary people and students. May Day in 2010 was truly a mass movement, in the sense that a vast variety of different layers of the oppressed masses participated in it.

All in All, May Day was celebrated despite the most brutal attempts of the Islamic regime. May Day did not become a breakthrough day with anything significant like a general strike or anything like that. But the most important effect it had was that more and more youth and revolutionaries of the movement learnt about the working class and its aims. The question of working-class leadership of the movement, which was previously discussed only by small numbers of Marxists, is now a hot topic of discussion among the youth. They are going more and more toward the conclusion that the entry of the working class is the only thing that can save the revolution and pave the way for the continuation of the struggle.

As we are approaching the one-year anniversary of the beginning of the revolution, the problem of the movement remains what it was on the first day. We said from the very beginning that as magnificent as the massive demonstrations were, they could not be sustained forever and in the face of repression by the regime. What we need is the general strike of the working class - the force that when it moves can stop the wheels of society - and put the question of power at the centre.

What we also need is organization on a local level. Committees in neighbourhoods and factories should be organized and prepare for the continuation of the movement. We see now that workers have effectively taken up many democratic demands of the movements; now the youth and activists of the movement should also take up workers’ transitional demands for a living wage and secure the entry of the massive population of the working people to the movement.

Despite all the attempts of the regime to “stem the conspiracy”, it is clear to see that none of the contradictions that led to the rise of the revolutionary movement have been solved and the movement will resurface on a higher level. The Islamic regime is in an absolute dead-end, politically, economically and diplomatically.

Communists and Socialists, who are present throughout Iranian society and within the movement, have a precious task at the moment. They should build their own organizations and press for and consolidate their forces while actively intervening in the movement and bringing up transitional workers’ demands, as well as the perspective of workers’ organizations linking up with the movement.

Supporters of International Marxist Tendency in Iran are ready to play their part in this process and they have set on this path by starting a new website called Mobarezeye Tabaqati (Class Struggle) that should be up in a matter of days.