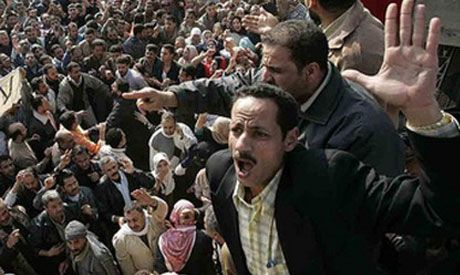 The class struggle is once more heating up in Egypt. Al-Sisi’s “popular” image is starting to fade as five union leaders are arrested after 50,000 post office workers came out on strike.

On Tuesday, 25 March, five Postal Authority workers and board members of the Independent Union in Alexandria were arrested at their homes at 1am. The detained workers are: Haitham Othman, Ayman Hanafy, Hany Al-Sabagh, Gaber Ismael, and Hisham AbdelHamid.

The arrests came as a response by the authorities to the open ended strike involving the 50,000 postal workers, which began on Sunday, 23 March. Participation in the strike has been high with over 70 percent coming out. Contrary to the intentions of the state, the arrests have not only failed to halt the strike, but have resulted in more workers in the Cairo central distribution point joining in.

The state media has been trying to blacken the image of the strikes by claiming that those leading it are terrorists and that they are connected with the Muslim Brotherhood, but the strike leaders have denied this. Zeinab Ali, secretary general of the Independent Union of Postal Authority workers, said “I joined the [anti-Morsi] protests on 30 June, but now I am not sure if it was the right decision, now we are facing the old [pre-25 January] regime. We are willing to pay [with] our lives for the sake of a decent living.”

The post office workers have been taking strike action, on and off, for almost two months now. Their main demand is the implementation of the minimum wage which was promised by the previous government last Autumn. Then, the interim government and the SCAF, in an attempt to stabilise the situation in the country, announced the introduction of a minimum wage of $170 a month. This was a direct result of the 30 June mas revolutionary upsurge and it was received with enthusiasm by the workers and the poor. However, the application of the minimum wage was narrowed down to a thin layer of state employees, high-ranking policemen and high ranking employees within the army, while “economic formations” such as factory workers, bus drivers and post office workers were excluded.

As one bus company worker commented: “Why did the interior ministry get a 30 per cent hike, and [also] the army? Does it mean that this is the country of the army and police only?”

This question of the minimum wage has now become a focal point of a wider strike wave, which has been sweeping across Egypt for the past two months. Angered by a continuous stream of broken promises, such as the implementation of the minimum wage and other laws, hundreds of thousands of workers have been on strike. In Cairo 42,000 bus company employees came out on strike, totally paralysing traffic in the capital. The drivers finally agreed to a $30 wage increase. This was clearly a victory for the workers. Nonetheless, their wages remain below the new minimum.

In Mahalla, where the largest factory in Africa is located, 20,000 workers from different factories were on strike for weeks, thus securing their year-end bonuses as well as the dismissal of the company director. The struggle for the minimum wage continues in textile factories around the country where thousands of workers are still on strike.

Police officers in six provinces also came out on strike, demanding higher wages. Lower-ranking police officers, who are often used as cannon fodder against the Islamists, are paid some 800 Egyptian pounds (around $115) per month and were not included in the new minimum wage law. Their strike ended in a 30 percent wage increase.

Also, tens of thousands of doctors, pharmacists and other health workers are on an open ended strike. According to the doctors’ union, more than 80 percent of the country’s 50,000 doctors are on strike and 20,000 have signed up to a mass resignation campaign. They are fighting against the unfair “incentive-based wages” which means that management’s favourites receive higher wages than others. They are also demanding the budget for healthcare be raised to “international standards,” or 9% of the state budget starting from the next fiscal year.

The limits of the SCAF

At the peak of the strike wave at the end of March, the interim government was forced to step down. The impotence of the new regime faced with this rising movement of the workers was obvious. This reveals the real balance of power between the revolution from below and the limited power of the SCAF regime at the top.

Many, especially young activists, were in despair after the rise of the SCAF to power. Many of them took to the streets to protest against the new regime. But they were moving in advance of the masses and were therefore isolated and did not receive the support they were hoping for when they were arrested and imprisoned. This has further demoralised a large part of the youth.

We explained at the time that the rise of Al-Sisi was due to the unpreparedness of the revolution and its lack of leadership. It did not have a plan for taking power and it ended by handing power back to the SCAF, the leaders of which presented themselves as being “with the people”, when in reality they are one wing of the counter-revolution. This allowed the SCAF to raise its authority temporarily by dressing in the colors of the revolution. But this authority is fading fast.

The latest crackdown and arrest of workers’ leaders are significant in this respect. We are no longer talking about the arrest of students who are not backed by the masses, but actual mass leaders who are waging a national struggle against the government. This will have an impact on the way people view Al-Sisi and the SCAF regime. The fact that the strike escalated after the arrest of the leaders only underlines this fact.

As long as Morsi was being removed and the army was cracking down on the Muslim Brotherhood, Sisi could appear to be on the side of the revolution. But six months after the removal of Morsi, reality is dawning on the workers and poor. Their humble living conditions are in stark contrast to the lives of the millionaire generals who live in palaces in their gated communities. The power cuts are becoming even worse than under Morsi’s presidency; poverty and unemployment are rising and inflation is still high.

As Al-Sisi announced his candidacy of the presidency he appealed to the people of Egypt to “work hard”, i.e. not to strike and protest! But it is becoming clear for many, that while the people are expected to work hard, they will not be allowed to enjoy the fruits of their own labour.

The masses will not passively accept the situation for long. The main factor is the enormous confidence that the revolution has imbued into the masses, who have not been defeated in open struggle. The recent victories of the workers only further proves the might of the Egyptian working class. And this is the real dilemma facing the regime. The coming to power of the SCAF was intended to cut across the revolutionary movement of the masses, give the very same masses an illusion that things were going in the right direction, and use the authority thereby gained to clamp down on the most militant sections of the workers and youth.

Al-Sisi has been riding on the back of the masses, striking blows at the Muslim Brotherhood, and this has made him very popular. That explains why he will most probably win the elections. A large part of society still has many illusions in him. In order for these illusions to be removed a period of Al-Sisi as President will be necessary, as it will put him in the spotlight and reveal his true colours, as he will be forced to carry out austerity measures and turn on the very electorate base that will have won him the Presidency.

Even before the elections this process has already started. Last week, 39 percent said they would vote for former army chief Abdel-Fattah El-Sisi, down from 51 percent in an earlier poll in mid-March. Once he ascends to the presidency this process will accelerate.

It will open up a new phase in the Egyptian revolution. The masses overthrew Mubarak and then very quickly moved in their millions against Morsi. They did not do this merely to achieve some cosmetic changes at the top. They did it to make a real change in their lives, for jobs, wages, healthcare, housing, etc. They will be forced to learn the hard way that unless they eradicate the economic system behind Mubarak, and later Morsi, i.e. the capitalist system, they will not achieve any meaningful change.

Once this seeps into the consciousness of the millions, another mightier revolution will be on the agenda.