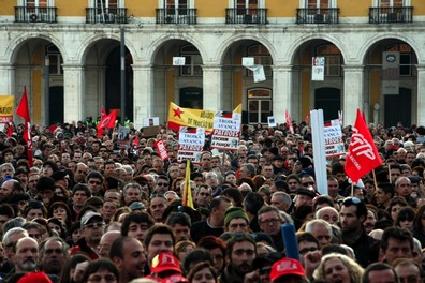 Today, hundreds of thousands of Portuguese workers went on a 24 hour general strike. This is the fourth general strike in two years that the centre-right government has faced. Today’s strike though, was by far the largest show of strength by the unions in the past few years.

Transport networks across the country were shut down, court and emergency services were severely limited, local government and news agencies have ground to a halt, and schools have been closed. In the private sector, industry and news agencies have been severely disrupted. In hundreds of workplaces across the country there was near 100% turnout for the strike action. The Portuguese workers have sent a clear message to the troika and their lap dogs in the government – “we are the people who run this country”.

The strike was called by the two largest trade union federations; the CGTP and the UGT, which between them represent 1.25million workers, 20% of the total workforce in Portugal. The immediate trigger for this strike action was the fresh cuts to jobs and pensions, a proposed increase in the retirement age from 65 to 66, and the attempt to increase the working week from 35 to 40 hours. The demands have been for an end to austerity and the removal of the government. To an even greater extent than previous strikes, today’s action has attracted broad support from unions, social movements and activist groups across all layers of society.

Demonstrations have been held up and down the country from Lisbon and Setubal in the South of the country to Coimbra in the centre of Portugal and Barcelos in the North, where the Minho Textile Union is headquartered. Even the town of Funchal, situated on a small island off the coast of Morocco, has witnessed demonstrations by striking workers. The coordinator of the Left Bloc described today’s action as “one of the largest general strikes of Portuguese democracy”.

A failure of the capitalist economy

Even before these measures were announced, the Portuguese people were suffering under an enormous burden of austerity and falling living standards, which were imposed by the troika in exchange for a €78bn bailout in 2011. This has led to an unemployment rate of 18%, with that figure reaching 43% for under-25s, giving Portugal the third highest unemployment rate in the OECD behind Spain and Greece. As has been the case in Spain, Greece and Britain, there has been an explosion in the need for food aid with people in Portugal reduced to dependence on handouts and scavenging to make ends meet.

Pedro Passos Coelho, the Prime Minister, said in 2011 that there would be two years of tough economic times followed by a full scale recovery. Even by his own standards he has failed the Portuguese people. In 2012 the budget deficit increased from 4.4% to 6.4%. The economy is predicted to shrink by 2.3% this year, making this the third straight year of recession. The European Commission has predicted an even greater rise in unemployment this year. And when bond yields across the world jumped last week following the announcement by the Federal Reserve that it would begin to ease its stimulus measures, Portugal’s bond yields jumped highest of all.

For the government to announce another round of fresh cuts it is like salt in the already gaping wound. These new proposals that triggered today’s strike are the result of a recent ruling by the Constitutional Court that some of the original proposed austerity measures were illegal. The government therefore had to find new ways of making working people pay for this crisis. The broad support for this strike demonstrates that the pressure on all working people; whether they are “radical” or “moderate”, public sector or private sector; is becoming too much to bear.

A show of strength

Participation in today’s strike has been huge. There have been near 100% turnouts in transport, industry and the public sector. The subway system in Lisbon has been entirely shut down, replicating the success of a strike by Lisbon subway drivers at the end of last month. Bus services across the country have been stopped, with workers physically blocking the passage of the few remaining buses in service in spite of overwhelming police presence. Boats, trains and flights have all ground to a halt as well. Non-emergency services at hospitals have been severely disrupted with 80% of nursing staff joining the strike.

The Ministry of Education took the decision earlier this week to reschedule exams due to be taken today on account of the strikes by teachers. A previous strike on June 17 by 90% of teachers disrupted exams and garnered wide support from students, with one saying “I agree with the teachers’ strike. Although the Ministry says that the strike affects students, I think that the rules that are imposed on teachers have also been undermining the students throughout the year.” Court services, fisheries, shipbuilders and other industry have also recorded particularly high turnout for the strike. Court services, consular services and local government technical services have also been severely disrupted.

In the private sector, the news agency Lusa ceased its output for the day due to the strike action. Autoeuropa, one of the largest motor vehicle assembly plants in the country, was also completely shut down by striking workers and buses owned by the private STCP company have been out of action all day. The waste processing industries run by Valorsul have also come to a standstill due to the strike action and in addition a number of food production and distribution companies have seen 100% participation in the strike by their employees.

Today’s strike has demonstrated the power of organised strike action. It serves as a reminder to Passos Coelho and his friends in the troika that a militant and organised working class is an unstoppable adversary. While some, such as the UGT union, have simply been calling for the government to change its policies, the Portuguese Communist Party (PCP) has been vocal and forthright in its demands that this government be removed and early elections called immediately. The CGTP union has echoed these demands. These calls have been well received by many who took action today, and while the government’s approval ratings are at rock bottom, support for the PCP is increasing. This is the fourth and by far the largest and most solid general strike against Passos Coelho reflecting the precarious position his government is in.

However, it is clear that this right-wing government will not change course now – they have no other direction in which to go. These capitalist politicians are unable to see beyond the narrow confines of big business, private property and profit. In the confines of the Capitalist system, austerity is the only way out of this crisis. This is why the PCP and the unions must continue the campaign to remove the government as the only way to stop the vicious attacks on workers.

Today’s strike action illuminates the path ahead. The joint action between the CGTP and the UGT has brought together hundreds of thousands of workers, from both inside and outside the union structures, to fight for a common cause.

Today’s general strike shows the enormous strength of the working class. But what is needed is to prepare an all-out open-ended political general strike with the clear and explicit aim of toppling the government, repudiation of debt and reversal of cuts. The recent history of Greece holds an important lesson for the Portuguese workers. In the space of two years the Greek unions have called roughly twenty-three 24-hour or 48 hour general strikes, and yet the government remains and the austerity continues.

The inspiring display in Portugal today is not an isolated incident but part of a general trend throughout the country and across the world. Portuguese subway drivers, teachers and postal workers have all been on strike in the last two months, with turnout at those strikes being at least 85%.

Today’s strike also comes at the same time as the continuing demonstrations in Turkey and Brazil. Due to the high unemployment rate, many Portuguese people have been travelling to Brazil for work – only to find a country seething with as much discontent as their homeland. Yesterday saw a national strike in Chile called by student unions, while teachers in the UK have also been on strike today.

Messages of support for the striking Portuguese workers have been pouring in from trade unions and workers across the world. Workers from the Confédération Générale du Travail (CGT) posted a message of support on Youtube, and the Confederación Sindical de Comisiones Obreras (CCOO) released an official statement of solidarity. International support like this is vital because workers across the world all find themselves paying for a global crisis they did not cause and faced with the same struggle for control over their own lives.

Numerous activists on Twitter have noted the magnificent movement in Portugal today and questioned why trade unions in their own countries were not calling for similar action. Workers throughout the world should offer solidarity with the Portuguese strikes, and use the Portuguese struggle as a spark with which to energise their own.

The main problem today is the deep crisis of the capitalist system itself. The barbaric austerity that the capitalists are trying to force over the head of the masses is the expression exposes the real nature of this system that has entered a severe crisis. Therefore, in order to guarantee victory, the PCP and other left parties must put forward a coherent political program that links the struggle against cuts to the struggle for socialism.

Today’s general strike should be celebrated as a victory of working class solidarity in the face of the brutal policies of a vicious government and dictatorial bureaucrats. It should also be seen as showing the way forward for the workers parties and unions in their struggle against the violent death throes of capitalism, for a transformation of society along socialist lines. In the words of the workers of the District of Puerto in Portugal: “We demand the resignation of the government, viva the general strike!”