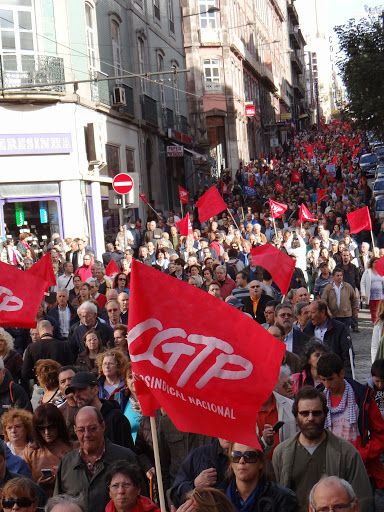 Tens of thousands of people marched in Portugal on Saturday, October 19th, against the proposed 2014 budget which includes yet another set of severe measures to make workers, pensioners, civil servants and working people in general pay for the crisis of capitalism.

In Lisbon the government had banned the protest, called by the CGTP trade union and backed by the anti austerity campaign “Que se lixe a troika” and other groups, from going through the April 25 bridge, alleging “safety concerns”. Finally, the marchers hired 400 coaches to transport, part of the protesters who were on a slow march from the red belt of Lisbon to the place of the final rally, along the route that crossed the disputed bridge. Another 50,000 rallied in Porto in a huge show of strength.

The budget plan of the right wing Passos de Coelho government includes €3.2bn in budget cuts. Tax increases implemented in the previous two austerity budgets will be maintained, while corporate taxes will be cut to 23%, down from 25%. The wages of public sector workers will be cut between 2.5 and 12% bringing savings worth €2.8bn, and there will be pension cuts worth €728 million, as well as a raising of the retirement age from 65 to 66 years. Around 3% of all workers in public sector companies will be laid off, as well as many state sector companies being privatised.

This is on top of all the other cuts in wages, pensions and public services already implemented in the last few years which have aggravated the economic crisis and plunged the country into a deep social crisis.

To add insult to injury, these massive cuts have not even achieved their stated aim of reducing the overall state debt, which has shot up from 94% of GDP in 2010 to 124.1% of GDP in 2012, the biggest percentage point increase of any European Union country, according to the latest Eurostat data.

The country is still in recession, with forecasts for the 2013 GDP varying between - 1.6% and - 2.7% and, perhaps, there will be very mild growth in 2014. Unemployment is at a record high of over 16%, and despite the massive cuts, the government will miss the deficit reduction targets for this year (5.5% of GDP is the target, the real figure will be more like 6%), despite years of massive austerity cuts imposed by the 2010 €78bn EU bailout.

The government of Passos de Coelho, who boasted of being a strong man and the good pupil of the troika when he was elected in June 2011, is now weak, his coalition divided and extremely unpopular. It came very close to collapsing in July, after the June 27th general strike, the last in a series of sustained mass mobilisations against the right wing coalition government. One million came onto the streets in September 2012, then one and a half million in March 2013. 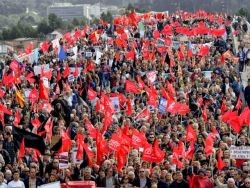 The "opposition" Socialist Party is still discredited (it signed the bailout conditions just before being booted out of office) and only gains in percentage terms because of the increased rate of abstention. In the recent municipal elections on September 29th, abstention increased by 550,000, meaning 10% of those who voted in the 2009 municipal elections did not bother to vote. Spoilt and blank ballots more than doubled, with an increase of 170,000 to a total of 330,000. The votes for the ruling right wing coalition went down by 600,000; and the social democratic PS in "opposition" lost 270,000. The only party to grow, in this context, was the Communist PCP which gained 13,000 votes; while the left wing Bloco de Esquerda lost 45,000 votes.

The Communist Party, which still has deep roots amongst the industrial working class and leads the main trade union confederation CGTP, is the main beneficiary of the unprecedented wave of discontent where the traditions of the 1974-75 revolution are coming back to the fore. Still, election results and opinion polls do not adequately reflect the depth and breadth of discontent and anger which has accumulated in Portuguese society.

The demonstrations on Saturday 19th were not the end but just the beginning of a series of mass mobilisations planned for the next few weeks against the proposed 2014 budget and the Passos de Coelho government in general. The “Que se lixe a troika” movement (literally “Fuck the Troika”) has already called for nationwide demonstrations on October 26, under the slogan “there are no dead end alleys.” Protests will take place in about 40 different towns and cities and the aim is clear: to bring down the government and its budget of cuts and to find a way out of the impositions of the troika.

The CGTP on its part has called for another mass demonstration on November 1st outside Congress. Different groups of workers have already announced sector-wide strikes: transport workers between October 25 and November 8, postal workers will strike against privatisation on October 25 and there is already a general strike of public sector workers called for November 8. It is quite likely that pressure will build up for a new general strike at some time in November.

As well as the anger from the streets, the government will also have to jump over the hurdle of the constitutional court which in the last two years has ruled some of the austerity measures and budget cuts as unconstitutional. It would seem that the needs of capitalism in crisis in Portugal enter into conflict even with the Constitution (which was enacted during the revolution of 1974-75) and the IMF, the European Commission as well as the Passos de Coelho government have been exerting enormous pressure on the High Court to allow the 2014 budget to go through.

What is being prepared in Portugal is yet another wave of mass discontent and powerful strike action. Will this be enough this time to bring down the right wing government? That is not ruled out. But then, the question that needs to be answered is, what is the alternative? The Socialist Party is committed to the bailout conditions, and the troika is not prepared to give Portugal any leeway. The only conclusion that can be drawn is that if the PSP came to power, it would end up carrying out the same policies (perhaps with a minor cosmetic change or two), as the ruling right wing coalition.

The two parties to the left of the SP are afflicted by the lack of a serious alternative to the crisis. The Bloco de Esquerda leadership espouses a reformist Keynesian "social Europe" and an "audit of the debt", while the PCP leaders advocate a "patriotic and democratic" economy outside of the euro. The advantage of the PCP is that as well as having strong working class roots, it has been very sharp in demanding the downfall of the government and its policies. What is necessary, however, is to combine opposition to the government and austerity cuts with a clear explanation that these are the consequence of the crisis of capitalism itself, and therefore, the only solution is a decisive break with the system, through the nationalisation of the commanding heights of the economy under democratic workers’ control and an internationalist appeal to the workers of Europe to follow the same road.