This article takes note of the effects of the recession on workers in the USA (high unemployment, low wages, threats of losing homes, etc.) and how Obama is continuing Bush's program of spending billions of dollars bailing out Wall Street. The union leadership told workers that voting the Democrats into Congress and the White House would change things, but where is this change? As the Workers International League explained, voting for the "lesser evil" in a system dominated by two corporate parties would bring about an immediate "evil." People then get tired after no real change and end up bringing the "greater evil" back into power. This is precisely what happened in Massachusetts.

People are angry. The richest 1% owns more than the bottom 95%. The government says that one out of 6 Americans is “food insecure.” More people are without health care or are forced to pay more for it. There is high unemployment and millions have either lost their home or are threaten with losing it. Others are paying very high mortgage payments or exorbitant rent. As of 2008, more than 91 million Americans, almost a third of the USA, live at an income of only $21,834 per year or less! Can you imagine what will happen when the figures from THE 2009 recession are figured in?

While all this is happening, the federal government has showered AIG and the Wall Street banks with billions! This bailout started with Bush and the Democratic Congress but has been continued by the Obama administration.

The leadership of the unions in this country told workers that things would get better if they put Democrats in the White House and Congress. However, what has changed? As the Workers International League has explained, in a system dominated by two corporate parties, the strategy of supporting “the lesser evil” means that you get one form of “evil” immediately, and then, as people get increasingly frustrated with the lack of real change, they will throw out the incumbents and bring back “the other guys” -- the “greater evil.” 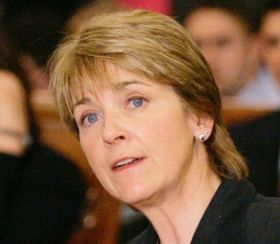 Democratic candidate Martha Coakley In Massachusetts, this is what happened. After controlling the Senate seat for 47 years, the Democrats assumed they would be a shoe-in to win it again. In many parts of Massachusetts registered Democrats outnumber registered Republicans by a margin of three to one. But after a year of the “School of the Democrats,” disillusionment has already begun to set in. Workers and youth, many of whom voted for Obama and the Democrats with hope for change that “they could believe in,” were so discouraged that they did not even bother to vote. In frustration, some of them even voted Republican to send a message. Hart Research Associates conducted a poll of 810 AFL-CIO voters on election night and found that although voters without a college degree favored Obama by 21 percentage points in 2008, Democratic candidate Martha Coakley lost that same group by a 20-point margin just one year later.

It should be understood that the Democrats have control of the White House and Congress and they control the Governor and state legislature in Massachusetts. The Massachusetts congressional delegation was made up entirely of Democrats until this election. However, far from using these positions of power to improve the lives of the majority, it was the Democrats in Boston that were putting forward cuts in education and public services, while raising taxes on working people.

The frustration can clearly be seen on the health care issue. Many want to see a universal healthcare system put in place in this country. In fact, a poll conducted by Research 2000 on election day, showed that a whopping 82% of those who voted for Obama in 2008 but who are either abstaining or voting Republican favor “the national government offering everyone the choice of a government administered health insurance plan -- something like the Medicare coverage that people 65 and older get - that would compete with private health insurance plans.” However, Obama and the Democrats in Congress proposed a scheme which specifically excluded undocumented workers, was nowhere near universal even for US citizens, would make insurance companies richer, and would tax many union members’ health plans. This proposed tax on so-called “Cadillac health care plans” -- in reality benefits won by union members through struggle against the bosses -- even pushed some union workers to vote Republican. Many people understood that their situation could get worse under this kind of “reform.” Real health reform should improve health care for those who already have health coverage and provide coverage for those who don’t. How would this be paid for? Ironically, the US spends more on health care than any other industrialized nation, and yet some 50 million are without coverage. This is because the system is dominated the profit motive. By nationalizing the insurance companies, HMOs, hospitals, medical technology companies and drug companies and administering them under public control in the public interest, genuine universal health care could be achieved. 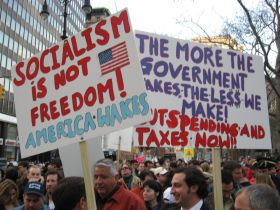 “Tea baggers” The so-called Tea Party movement or “tea baggers,” must be seen in the above context. This movement seems to have at least partially arisen from Ron Paul’s presidential campaign in 2008. The tea baggers argue for no government role in health care, they are against government stimulus programs for the economy and were against the bank bailouts. The WIL was opposed to the bank bailouts, but we proposed that the banks be nationalized under democratic workers' control to democratize and plan the economy and use their profits for the good of society as a whole. The tea bag movement has no solution to the banking crisis except letting the market function without government intervention or subsidies. This solution was tried before and resulted in the Great Depression. The same is true with their opposition to the federal stimulus package. If there had been no stimulus, the unemployment rate would be even higher. If the tea baggers were ever to get in power, they would immediately set off a movement against them as they seek to slash education, Social Security, Medicare and other public programs and launch attacks on the public sector workers.

Since the Massachusetts election, Obama seems to have moved in a somewhat a populist direction, calling on Congress to pass legislation to create jobs and threatening to regulate the big banks and tax their profits as well. At the same time, however, he seems to be conceding defeat on even the severely pared down health reform he spent so much of his first year in office promoting. In the end, none of his proposals will fix the sick diseased system known as American Capitalism. In fact, Capitalism is sick on a world level. It must be replaced and cannot be fixed.

79 percent of voters polled by Hart Research Associates on election night said that the most important issue was jobs and the economy, followed by controlling soaring health care costs. There is political confusion in the working class today. This is caused by the fact the rich own and control all the political, media and educational institutions, which they use to create and shape public opinion to conform to their needs and interests. It is the duty of the labor movement to fight against the huge capitalist propaganda machine and offer a class based analysis of events instead.

The corporate media and pundits are blaming Obama's alleged “socialism” and “radicalism” for the defeat in Massachusetts. Nothing could be further from the truth. According to the Hart Research Associates poll, 47 percent of voters said they felt the Democrats had not brought out enough change, compared to 32 percent who thought they had changed too much. Even 50% of voters for Republican Scott Brown were concerned about a lack of change.

AFL-CIO President Richard Trumka called the election result a “working class revolt,” and stated clearly that “voters showed they don’t think Democrats have overreached -- they think that the Democrats underreached.” These words need to be put into action. Imagine if the AfL-CIO used its vast resources to build a labor party instead of continuing their support for the Democrats? Given the anger that exists, if Labor broke from the two parties of Big Business and set up a labor party that would not bail out the rich, but would fight for full employment, higher wages, including a higher minimum wage and free universal health care, it would really make an impact in the coming midterm elections this November. Public anger will also increase with the recent Supreme Court ruling, which allows corporations to pour even more money, in an open way, into their favored candidates' campaigns. Imagine a labor party that could stand in elections and proclaim that it does not take one penny from corporations and therefore owes them nothing!

The fact that reality conflicts with the capitalist propaganda and the policies of the current labor leaders will eventually lead to an even more widespread questioning of the system by workers and the youth, but this will take time. It will not happen in a straight line. It is possible that there could be an increase in votes for left-wing candidates running independently of the two Big Business parties, if the result is compared to the 2006 mid-term elections. For example, the Socialist Party claims that their 2009 candidate for governor of New Jersey gained more votes compared with the 2005 gubernatorial election. Although the WIL might decide to support some of these candidates, unless a large section of the labor movement with its resources breaks from the Democrats and puts forward candidates, the results will continue to be extremely modest.

The real, contradictory mood underlying society is indicated by the polls cited above, which serve as a snapshot of how Americans are feeling at the moment. The Research 2000 poll found that 57% think Obama has not delivered the change he promised. 53% would be more likely to vote Democrat in the midterm elections if they took stronger action against Wall Street and cut the bonuses received by company executives. 47% think the Democrats are more on the side of corporate lobbyists than on the side of ordinary Americans, while just 23% believe the Democrats are on the side of the “little guy.” Self-identified independent votes had nearly the same views as those who identified themselves as Democrats, proving that the so-called “middle” is far more to the left than outlets like Fox News would have us think.

The anger and frustration will come out in other ways as well. Opposition to the policies of the present labor leadership will grow in the trade unions. We saw this in the recent NYC Teamsters locals’ elections and the NYC Transport Workers Union. Also, many workers desperate to fight back against the boss are going to look to get organized into unions. Most likely, it will be the more aggressive and militant unions which will organize these new workers and start to change the dynamic in the labor movement. A new phase is opening up in US politics and Americans tire of the “same old, same old.”