France
Share
Tweet
A new and particularly vicious attack on the basic rights of young workers has led to a spectacular upsurge of protest and struggle in France. Once again, millions of students and workers have taken to the streets to defend their interests against the most reactionary government ever seen in France since the Vichy regime at the time of the Second World War.

A new and particularly vicious attack on the basic rights of young workers has led to a spectacular upsurge of protest and struggle in France. Once again, millions of students and workers have taken to the streets to defend their interests against the most reactionary government ever seen in France since the Vichy regime at the time of the Second World War. 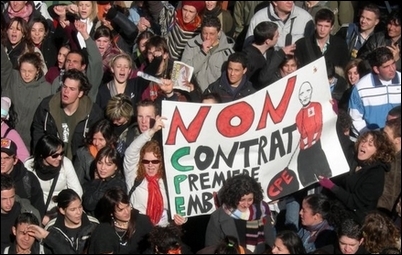 The present wave of protest comes in the wake of the mass riots of desperate and poverty-stricken youth that flared up in the working class suburbs of over 200 towns in the latter months of 2005. At the time, Interior Minister Nicolas Sarkozy claimed that these had been the work of “organised criminal gangs”. This was immediately contradicted by his own intelligence services, which officially defined the events as “a spontaneous form of popular insurrection” resulting from “the accumulated effects of social and racial discrimination”. President Chirac was also forced to recognise the existence of a “profound malaise” in society.

However, in a typically treacherous and cynical fashion, Chirac and the right-wing De Villepin government have tried to exploit the révolte des banlieues in order to carry out further attacks against the rights and living conditions of workers in general, and of young workers in particular. Presented as a means of reducing unemployment, a new law introducing a special labour contract for workers under 26 years old relegates them to nothing more than raw material for exploitation, and places them completely at the mercy of employers. The so-called “First Employment Contract” (Contrat première embauche, or CPE) gives employers the right to sack workers immediately and without any justification over a period of two years. In spite of the name given to this contract, it has nothing to do with “first employment”, but can apply to all young workers. Under this law, any youth that complains about working conditions, joins a union, or displeases his employer in any other way – even if only by falling sick – can be simply sacked on the spot. The employer does not have to give any explanation for his decision. There can be no doubt that if this new law is allowed to stand, it will only be a matter of time before it is extended to cover many other categories of workers.

The scale of the reaction to this attack – which comes in the wake of many others over the last few years – has given us a new example of the magnificent fighting traditions of workers and youth in France. Not for nothing has this country been called the “mother of revolutions”.

Over the last month, mass demonstrations have taken place throughout the country. Even the most conservative labour unions have been forced to take a firm stand on this issue, on account of the pressure and burning anger of the workers. On Saturday 18th March – which was also the anniversary of the Paris Commune – some 1.5 million people took to the streets. In Paris, 350,000 workers and youth demonstrated. In Marseille, where a number of very bitter and determined strikes to defend jobs and prevent privatisation (Corsica Ferries, public transport and dock workers) have been cruelly defeated, 130,000 people were on the march.

One noticeable feature of these marches is the scarcity, compared to the huge numbers of demonstrators, of the banners and flags of the traditional workers’ and students’ organisations. These are not demonstrations of regular activists, but of the hitherto unorganised mass. The students have moved on a gigantic scale through the organisation of democratic assemblies, which decide on the course of action to be taken. At least 65 universities are involved in the struggle. School students too are in revolt. Even according to the figures of the Ministry of Education, the movement has affected 313 schools. According to student organisations, the real figure is at least twice as high.

Further mass demonstrations and strikes, in the public sector and the private sector, are now planned for March 28th. The crisis is having profound repercussions at all levels of society. Spontaneous marches and protest actions are taking place every day in different parts of the country. The management boards of universities and a whole series of prestigious institutions and personalities have spoken out against the CPE, insisting that the government should back down and withdraw the measure immediately. A poll published on the 20th March indicates that only 22% of the population consider the present situation to be a “temporary protest”, whereas 71% consider that France has entered into a “profound and lasting social crisis.” Other polls indicate that between 60% and 75% of the population – and over 90% of the youth – agree with the aims of the anti-CPE movement. 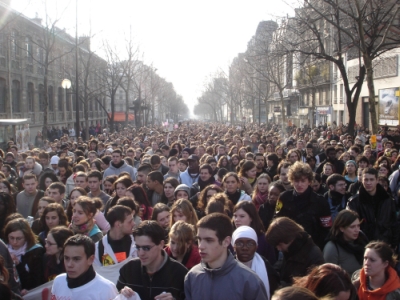 The leaders of the Socialist Party, not usually inclined to rash declarations and gestures, have announced that they will immediately repeal the hated law if the left wins the parliamentary elections, due to take place in the spring of 2007. The victory of the left in the next elections can be considered as a certainty, such is the hostility of the mass of the electorate to the present government. But many things can happen between now and then. The Socialist leaders are desperately trying to channel the opposition to the government into purely parliamentary and electoral lines, but they do not and cannot control the present movement.

Given the tension in society and the bitterness of the struggle underway, events could develop into a revolutionary situation similar to that of 1968. All the ingredients for such a turn are present. If the government does not back down, the movement is likely to grow in scale. Any incident could lead to a further escalation. At the time of the student protests which took place under the Chirac government of 1986-1988, a young man was beaten to death by police, provoking a demonstration of no less than one million people in the streets of the capital. Under present conditions, an incident of that kind would have an even greater effect, after so many years of repeated attacks on the rights and living standards of working people, leaving between 5 and 7 million people living below the poverty line.

The government is in a state of panic. To back down now would amount to a serious defeat. De Villepin would lose all credibility just 9 months after his discredited predecessor, Jean-Pierre Raffarin, was sacked following the defeat of European Constitution in the referendum of 29th May. On the other hand, to maintain the CPE in the present context will mean fuelling the protest movement and the risk of provoking a revolutionary crisis. As Napoleon Bonaparte once said: “There are situations, in politics and in war, in which whatever you do is a mistake”. De Villepin is in just such a situation.

The present deadlock and the widening gulf between the classes are yet another sign of growing social and political instability in France, against a background of economic stagnation, massive state debt – the accumulated deficit of the French State is now more than 1,100 billion Euros! – and sharply declining living standards. In all fields, whether it be employment, wages, working conditions, housing, pensions, social security, health, education or social services, society is being driven backwards.

This cannot continue indefinitely. The mass demonstrations in defence of pensions in 2003, the long and bitter strikes over recent years, the rejection of the pro-capitalist European Constitution, the riots of last year, and now the present movement, are but so many unmistakable signs, like the first tremors of a pending earthquake, of the dawning of a new era in the history of France. This will be a revolutionary era, in the course of which the necessity of moving in the direction of socialism will be placed on the order of the day. We can say this for the simple reason that no way out will be found on the basis of capitalism. It must be understood that workers and youth will only come to this conclusion with some difficulty, feeling their way forward, and suffering setbacks as they go. But when, on the strength of their own experience, they finally decide that a fundamental change is necessary, no force on earth will be able to stop them.