Balkans
Share
Tweet
The workers and students in Slovenia have awakened. For the first time since Slovenia’s separation from Yugoslavia, workers and students from all across Slovenia came together on November 26 to march for a common goal and to clearly demonstrate that they are prepared to fight against the government’s counter-reforms in education and the economy. 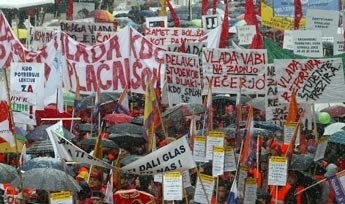 The workers and students in Slovenia have awakened. For the first time since Slovenia’s separation from Yugoslavia, workers and students from all across the country came together on November 26 to march for a common goal and to clearly demonstrate that they are prepared to fight against the government’s counter-reforms in education and the economy.

The Liberal Democratic Party of Slovenia (LDS) lost the electoral battle at the beginning of this year because the people were not prepared to stomach their policies of further “market liberalization” and the proposed reform package for education and public services. As a result, the Slovenian Democratic Party (SDS) – the former Social Democratic Party which was re-named just a few months before the elections – won a vast majority in parliament.

Of course, before coming to power, the SDS promised that they would not make any compromises and that they would maintain the “social nature” of Slovenia. As a result, they won the election on the promise of maintaining the status quo.

However, it soon became clear that they would not keep their promises. It all began in the state sector where hundreds of civil servants were fired because a state inspection had discovered that their diplomas had been falsified. In the confusion that followed the break up of Yugoslavia it was not hard to get a falsified diploma. It was an easy way for the bureaucrats to get their hands on good positions and bigger salaries. 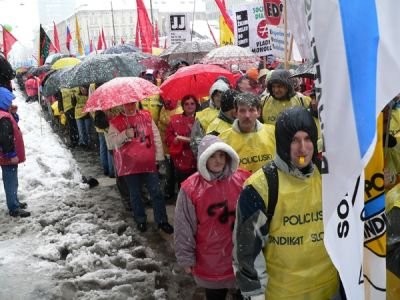 Most people greeted this step with enthusiasm, although it turned out that the majority of the purged civil servants were members of the political parties in opposition. After they had been sacked, the state ministries were sent bureaucrats, the majority of whom were members of the SDS – although with real diplomas. However, in the end the overall decrease of bureaucracy was minimal.

Added to this, the government announced just a few months ago a big Christmas package of counter-reforms which were to be implemented after the New Year. This package of counter-reforms included a fundamental reconstruction of the education system, which would see the end of state subventions for student meals, no more free education (the idea is that students should pay for their education after they graduate and get a job), a big change in the state scholarship system (where state scholarships would be no better than scholarships from private companies), taxation of student work, and followed with cuts in state funding for student housing. This is in stark contrast to the promised of more free student housing made by the president of the SDS, Janez Jansa, after he won the majority in parliament.

The package of counter-reforms was very generous to the bosses. The package would include a 20% increase in the universal tax rate, which would mean a 13% increase in the cost of basic everyday goods essential for survival for working people. The counter-reform package also says that workers will no longer be able to receive paid meals at work. At the same time, Jansa wants to decrease the taxation of business profits, so that "Slovenian businessmen will not have to look to cheaper countries to make a profit."

The workers, students, pensioners, and even the police of Slovenia cannot afford any more cuts to living standards. The protest was significant in itself because the police union joined the workers and students in the demonstration.

More than 400 buses, filled with workers and students from all across Slovenia, came to the capital, Ljubljana in the early morning of November 26. A total of 40,000 people turned out for the demonstration.

This is undoubtedly significant, taking into consideration that Slovenia is one of the smallest countries in the EU with a population of no more than 2 million. The demonstration would have been even larger had it not been for the weather. The night before the demonstration, some 30 cm of snow fell on capital – the first big snow of the winter season. Even more snow fell in other areas. Many people were prevented from coming to the demonstration because many of the buses were unable to reach the capital due to the weather. 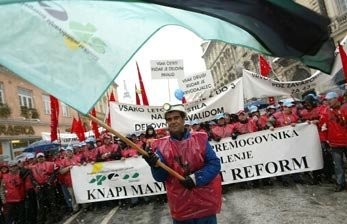 The mood on the demonstration was very enthusiastic and the protest was very militant, in words at least. The leaders of trade unions said: "The government says we are deaf, and we admit that we are deaf, because we cannot and we never will accept these reforms, not at the expense of the workers." Some also said that "if this reform package is passed, we will see the darkest times of capitalism return - the dark times that our generation, and your generation have never fully experienced, the dark times our great grandparents remember."

It is difficult to tell just how much truth there was in these words and just how far the leaders of the trade unions are prepared to go in employing the real methods of the class struggle to prevent the passing of this package of counter-reforms. What is clear though is that they can feel the pressure from the below, the pressure from the rank and file workers of the trade unions, the students, the pensioners, and the police who have said enough is enough. This demonstration shows that the workers are prepared to fight, and the trade union officials have been forced to respond. Only time will tell whether this was an exercise in letting off some steam to reduce the pressure of the masses, or the launching of a genuine struggle against the proposed cuts of the bosses.

It must be said that the protest had more of an impact on the protesters themselves than on the government. Janez Jansa, the leader of the Democratic Party, revealed his dislike for the working class when he commented on the demonstration saying that "Slovenians should wear better clothes on protests", and "don’t Slovenians have anything better to do than protest in this cold, snowy weather?" 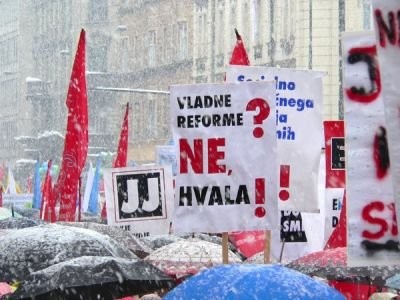 The most interesting callers were those who rescued him from prison. Jansa was imprisoned by Yugoslav authorities in the late 1980s in a purge of the Slovenian bureaucracy. Jansa was an official in the military, and it was claimed that he had classified military plans at his disposal. Some of those who got him out of prison back then called radio programmes to say that if they had known then the way that he would turn out, they never would have rescued him and would have let him rot in prison.

The future of the counter-reform package is still uncertain. The government has not changed its position. The real struggle lies ahead. This struggle must been seen as part of the process that is developing all across Europe. Recently, there have been general strikes in Belgium and Italy and big strikes in France and Spain. This whole process is now reflected in Slovenia, where, the same as everywhere else, the bosses can no longer afford reforms, or even to maintain the old reforms won by the working class in the past. At the same time, the workers can longer afford any more cuts and counter-reforms. This has put the class struggle back on the agenda across the whole of Europe. The people of Slovenia have shown the will to fight, and will return to the militant traditions of the past. One protest will not be enough! The task is to build the movement in all the workplaces and schools across Slovenia and to open a militant struggle against these counter-reforms and to launch the struggle for socialism.