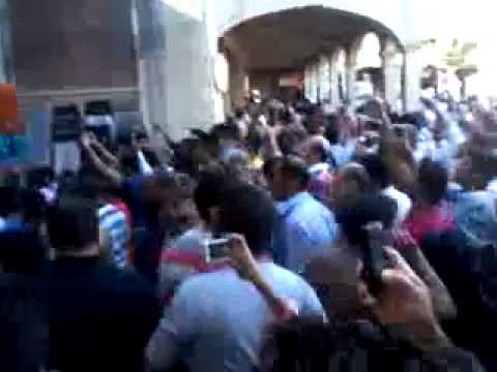 Today, October 3, 2012, thousands of people took to the streets in a spontaneous demonstration around the Bazaar of Tehran. The protests spread around the Bazaar, with people shouting slogans and wrecking a bank. The protest was against the massive price hikes of the recent period, the collapse of the Rial and the fact that the regime has chosen to completely deny the existence of these problems.

The slogans being chanted were: "Let Syria go, think about us" "Don't be afraid, we are all together" "Useless state, step down" "Shame on this people-deceiving state". The protest clashed with the riot police who made hundreds of arrests. Also yesterday there was a small protest of some hundreds of people near the Tehran Bazaar.

In the second largest city of the country, Mashad, some groups also took the streets in a militant protest that also ended in scuffles with the police. The protests were against price hikes and demanded the downfall of the regime.

In the last year, since the introduction of the hardest sanctions by western countries in Iran’s history, inflation has sky-rocketed. Undercover student researchers surveying 20 supermarkets and four government food distribution centres in Tehran discovered that 10 basic foods had risen in price by an average of 70% from March to July. In the meantime the Central Bank, was until just a few weeks ago putting inflation at around 20 percent. Although they now put the figure at 29 percent this is still far from the real situation.

At the same time and connected to the above, the Rial is experiencing a steep fall. Yesterday the currency reached a record low of 36,100 to the dollar in the free market, from about 34,200 at the close of business on Monday. On Monday last week, it traded at about 24,600, while it stood at around 12,000 just a year and a half ago.

The regime on the other hand has not expressed any official reactions. In fact, they are even denying that there are serious problems. Ahmadinejad said yesterday that this is a psychological war, but failed to address the hardships that people feel in their stomachs. Iran is quickly sinking into a deep crisis. In July thousands of people staged a spontaneous demonstration in the city of Neyshabur over the price of chicken. Unemployment and inflation are rising and enormous pressures are accumulating under the surface. These protests are an anticipation of what lies ahead.