Share
Tweet
On February 15, 16 and 17 the fourth assembly of the PSUV congress was celebrated in Caracas. The Marxists intervened with their own bookstall and delegates, selling a large quantity of material and discussing with many of the delegates. They report that there was a lot of interest in Marxist ideas and the general mood is one of wanting to push the party towards genuine revolutionary policies. 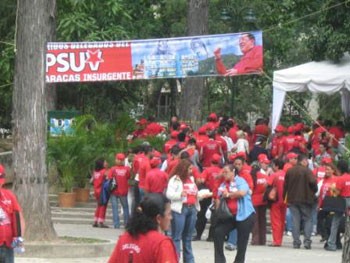 On February 15, 16 and 17 the fourth assembly of the PSUV congress was celebrated in Caracas. Before anything else, it is necessary to stress the huge importance of this event. The rank and file of the revolutionary movement participated massively in the process of registration for the PSUV and also in the elections of spokespersons (voceros) and delegates in the socialist battalions. Through this process the masses intend to radicalise the revolution, through the construction of the PSUV.

This fact was clearly reflected in the mood among the delegates at the congress. The great majority were there to represent their rank and file comrades in the battalions where they were elected. They are seeking ideas on how to defend and deepen the revolution and how Socialism can be built in Venezuela. 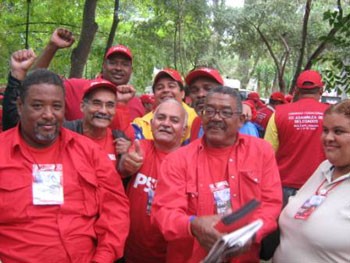 In this context, the only Marxist tendency that has understood the importance of the PSUV and its close ties with the masses is the Corriente Marxista Revolucionaria that publishes the paper El Miliante (Marxist voice of the PSUV). We think that the building of the PSUV with a Marxist programme is the only way forward if we are to defend the Bolivarian movement against its internal and external enemies.

That is why we decided to make a big effort to intervene in the PSUV and discuss with all the comrades who were elected delegates and sell Marxist educational material. We think that the ideas of Marx, Engels, Lenin, Trotsky, and also of the two British Marxists Ted Grant and Alan Woods, can contribute a lot to the debates that are going on inside the PSUV. It is necessary to learn the lessons that these revolutionary theoreticians have given us, in order not to repeat the mistakes committed in previous revolutions. 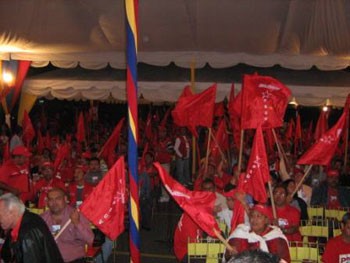 Thus, the comrades of the CMR - who are also active in the battalions of the PSUV ‑ intervened, setting up a stall with Marxist material and our paper El Militante. On Friday the congress was opened at the Universidad Bolivariana de Venezuela in Caracas where a plenary session was held. On Saturday a conference of the delegates was held with Chávez speaking and on Sunday there were workshops.

The mood among the majority of delegates was one of tremendous enthusiasm and a desire to struggle against the right-wing and the reformist bureaucracy. This was also reflected in the reception that our material got. Revealing an enormous thirst for revolutionary ideas, hundreds of delegates bought books by Marx, Engels, Lenin, Trotsky and Rosa Luxemburg, educational leaflets, theoretical magazines and analyses, etc. In total we sold for more than 2,500 Bolivares Fuertes (795 euros, a huge amount of money in Venezuela).

Especially the paper, El Militante, attracted a lot of interest. Its main header appealed very much to the delegates, with the slogan: "It is necessary to adopt decisive measures against the capitalists and the bureaucracy", "For a Marxist programme for the PSUV". The recent issue of the paper also deals with themes such as who is responsible for the scarcity of food products and how to combat it, plus international articles about the economic crisis, etc. 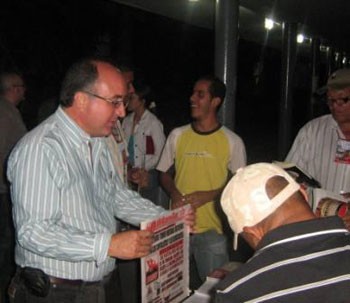 This issue of the paper has been the bestseller, with 280 copies sold just in the three days of the Caracas assembly of the congress. If we take into account the fact that there were around 1600 delegates, this means that a substantial part of the delegates were acquainted with our ideas. For example, one delegate bought ten copies and handed it out to his comrades and they used it to discuss the article by Alan Woods on the referendum defeat in their regional delegation meeting in the evening. Next day they told us, that they agreed with all the ideas expressed in this text. This is a good example of the current mood of the masses, which in turn is reflected in the vanguard of the movement.

Almost all the delegates who came to our stall and bought material, told us about the irregularities and the internal sabotage of the bureaucrats. However, the mood was not one of scepticism or of demoralization. On the contrary, the reformist policies of the bureaucracy serve to push the masses even more to the left, towards the ideas of Marxism and this is expressed in a significant part of the delegates who have been drawing advanced conclusions. 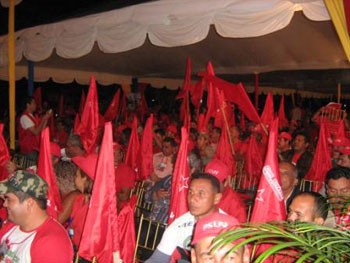 The bureaucracy is very weak and it was not been able to dominate the congress. The correlation of forces between the classes is favourable for the revolution and that is why the bureaucracy finds it very difficult to impose its will. Delegates said to us that "we have to throw out the bureaucrats", "we are fighting for a genuine revolutionary party with a real Socialist programme and not a social-democratic programme" and that "the PSUV should declare itself as proletarian internationalist party".

While almost all the delegates that we spoke to, were very positive towards Marxist and revolutionary ideas, the ideas of reformism found no echo at all. The reformists try - in a weak and indirect manner - to promote methods and ideas that have very little in common with Socialism and revolution. The ideas of a possible slowing down of the tempo of the revolution or of making some kind of agreement with the oligarchy were rejected by the delegates in all conversations we had with them. 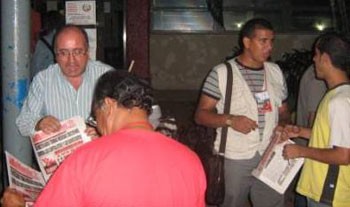 The next assembly of the congress will be in Puerto La Crúz, state of Anzoategúi, this coming Saturday. The Marxists of the PSUV, organized around the paper El Militante, will once again be there. We hope that the efforts of the comrades who are delegates at the founding congress will achieve the goal: a genuine revolutionary party which adopts a Marxist programme that will serve to abolish capitalism in Venezuela.

In the coming days, we will publish video-interviews with delegates from the founding congress.