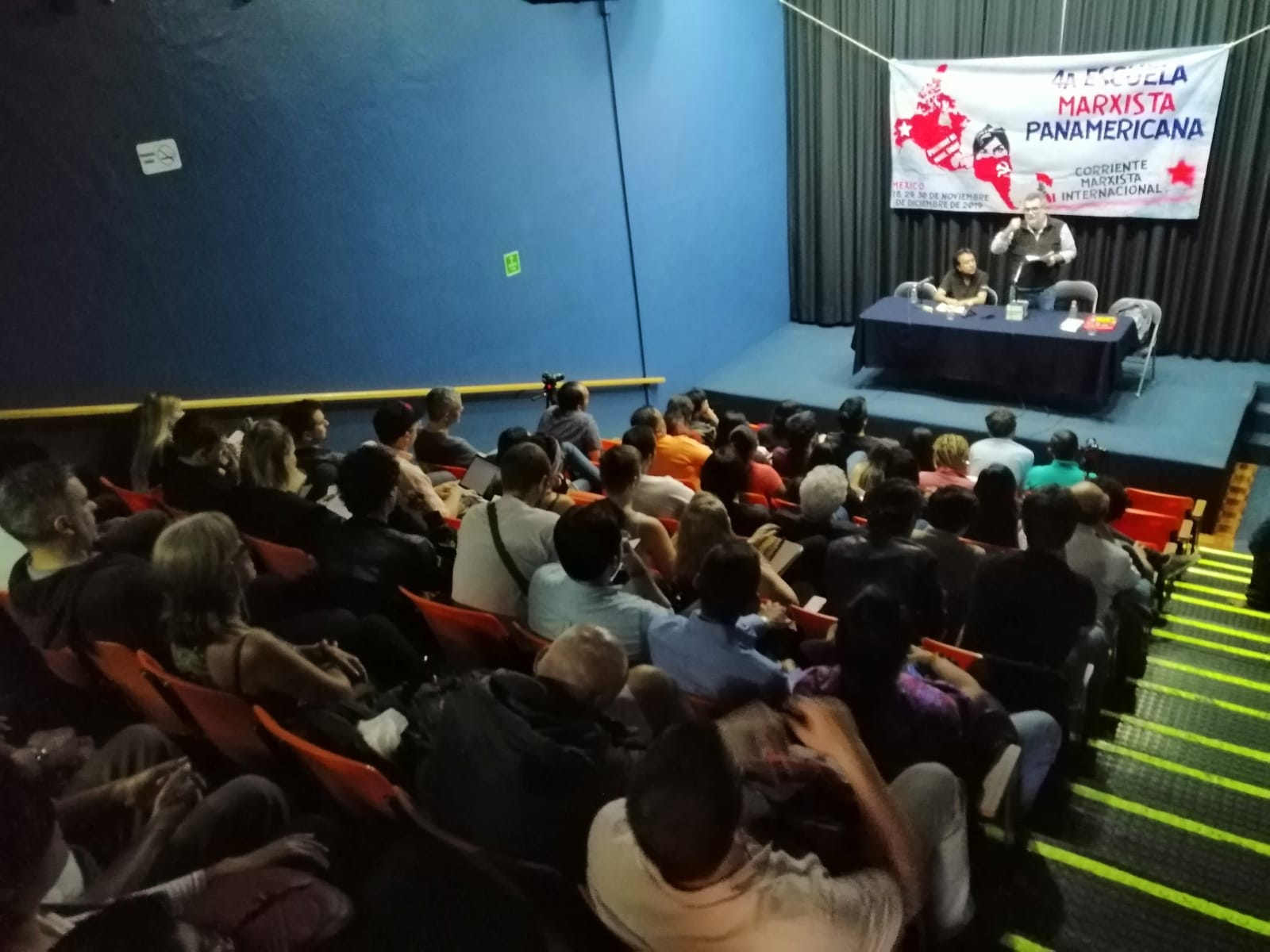 On 28 November, the opening rally of the 4th Panamerican School of the IMT was held at the Trotsky House Museum in Mexico City (click here for a full report on the three-day event). Gabriela Pérez, director of the museum, spoke in front of an international audience and welcomed the school. Following this, Ubaldo Oropeza, leader of Izquierda Socialista (the IMT in Mexico), opened the school in front of an auditorium of around 80 attendees from different countries in North, Central, and South America, as well as some from Europe. The opening theme was The Communist International, 100 years after its foundation, which was introduced by Alessandro Giardiello, leader of the Italian section of the IMT, Sinistra Classe Rivoluzione.

Alessandro explained how the Second International was lost. In its leadership, little by little, after Engels' death, it turned to reformism, then degenerated. They accepted the consequences of leaving the fight against capitalism to such an extent that they would end up supporting the imperialist war.

The Italian-born Marxist continued to explain how Lenin would declare the Second International dead as a revolutionary organisation and how efforts were made to build a new international, such as the conference in Zimmerwald, which, despite its confusion and heterogeneity, was a step forward to break with social chauvinism. When the October Revolution broke out, it became the axis and centre of the revolutionary struggle. With his April Theses, Lenin reoriented a party that, in his absence, had proposed merging with the Mensheviks. 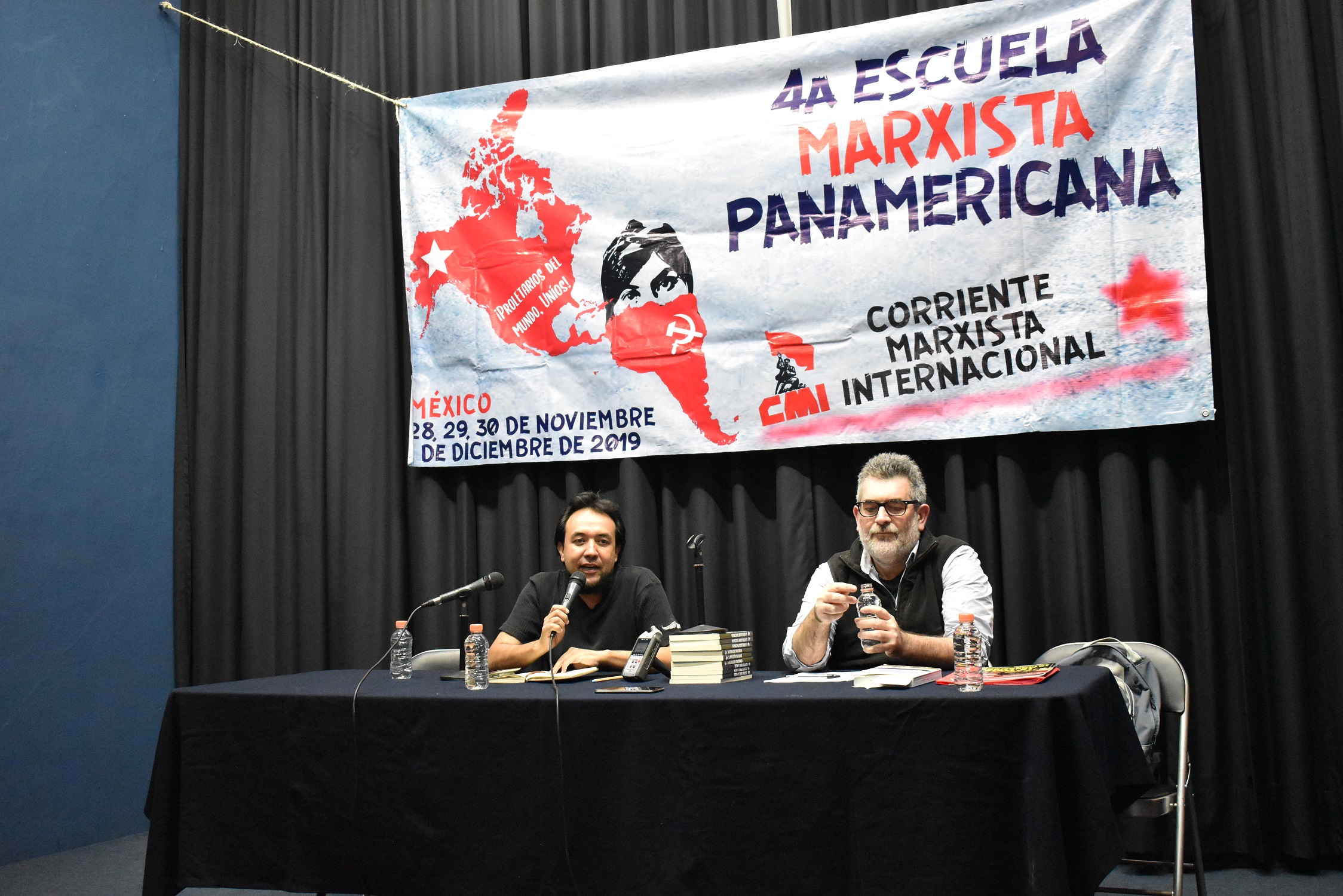 Alessandro from Italy (right) introduced the discussion on the degeneration of the Second International / Image: La Izquierda Socialista

The Russian Revolution had an international impact and there were revolutionary processes in a variety of European countries, such as the Soviet Republic of Hungary, Bavaria and factory occupations in Italy. Quoting Trotsky, he said: "If the people of Europe do not revolt by trampling on imperialism, imperialism will trample on us."

The Bolshevik leaders dedicated many efforts to establish international ties, until finally a conference was held that would end up being the first congress of the Communist International. This one took place, in the middle of the civil war, from 2-6 March 1919. 52 delegates from 22 countries attended. This congress called on the workers' parties to build the new International. It became a pole of attraction in countries like Germany, France, Czechoslovakia, and Italy (where the socialist party had majority vote to enter the new International). In Mexico, the Bolshevik Party created the Communist Party in 1919, with those in exile attracting anarcho-syndicalists. After two years, the Communist International had a presence on every continent, 700 daily newspapers and about three million activists. 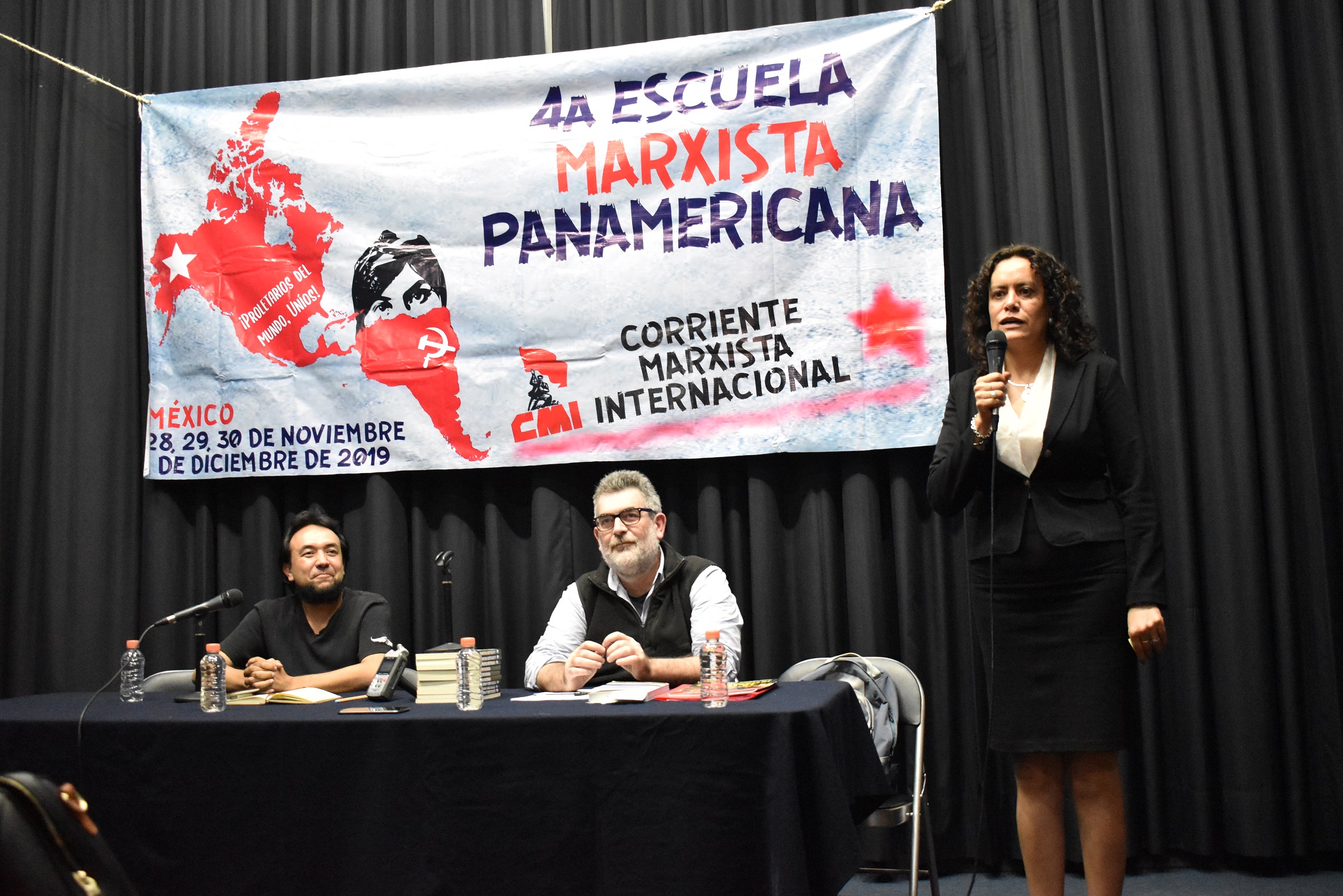 The Bolshevik leaders based themselves on debate and very patient explanation.

"Our task is to generalise the revolutionary experience of the working class, to purge the movement of the corrosive mixture of opportunism and social-patriotism, to mobilise the forces of all genuinely revolutionary parties of the world proletariat and thereby facilitate and hasten the victory of the communist revolution throughout the world." 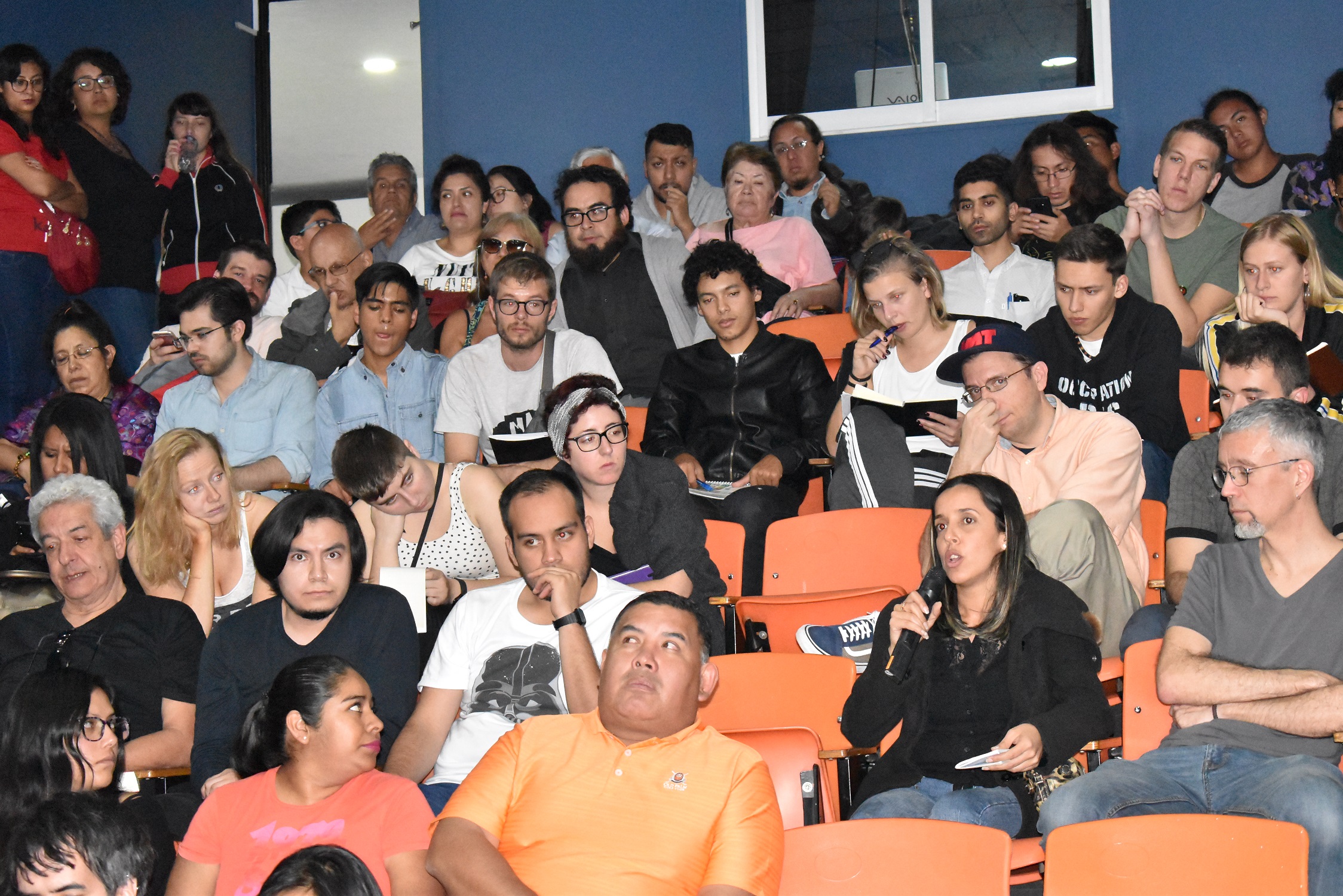 The opening rally of School was held at the Trotsky House Museum in Mexico City / Image: La Izquierda Socialista

After explaining some of the orientations of trade union work debated in the second Congress, Comrade Giardiello commented on how the masses pushed the old and conservative trade unionists and party members to the left, and that is why, in the second Congress, the 21 conditions were approved. He said that he would not read all the conditions but quoted the following to illustrate the revolutionary character of the construction of the Communist International and its fight against opportunism:

"Day-to-day propaganda and agitation must be genuinely communist in character and correspond to the programme and decisions of the Communist International."

"It is the duty of parties wishing to belong to the Communist International to recognise the need for a complete and absolute break with reformism and ‘Centrist’ policy, and to conduct propaganda among the party membership for that break. Without this, a consistent communist policy is impossible."

"Any party seeking affiliation must call itself the Communist Party of the country in question (Section of the Third Communist International)."

"All the leading press organs of the parties in every country have the duty of printing all the important official documents of the Executive Committee of the Communist International."

Alessandro then said that this reflects that a battle to the death that took place to throw out the opportunists from the new International.

He explained the fight against sectarianism (even if it occurs not in small groups but in parties of thousands), and he strongly recommended reading "Left-Wing" Communism: An Infantile Disorder. 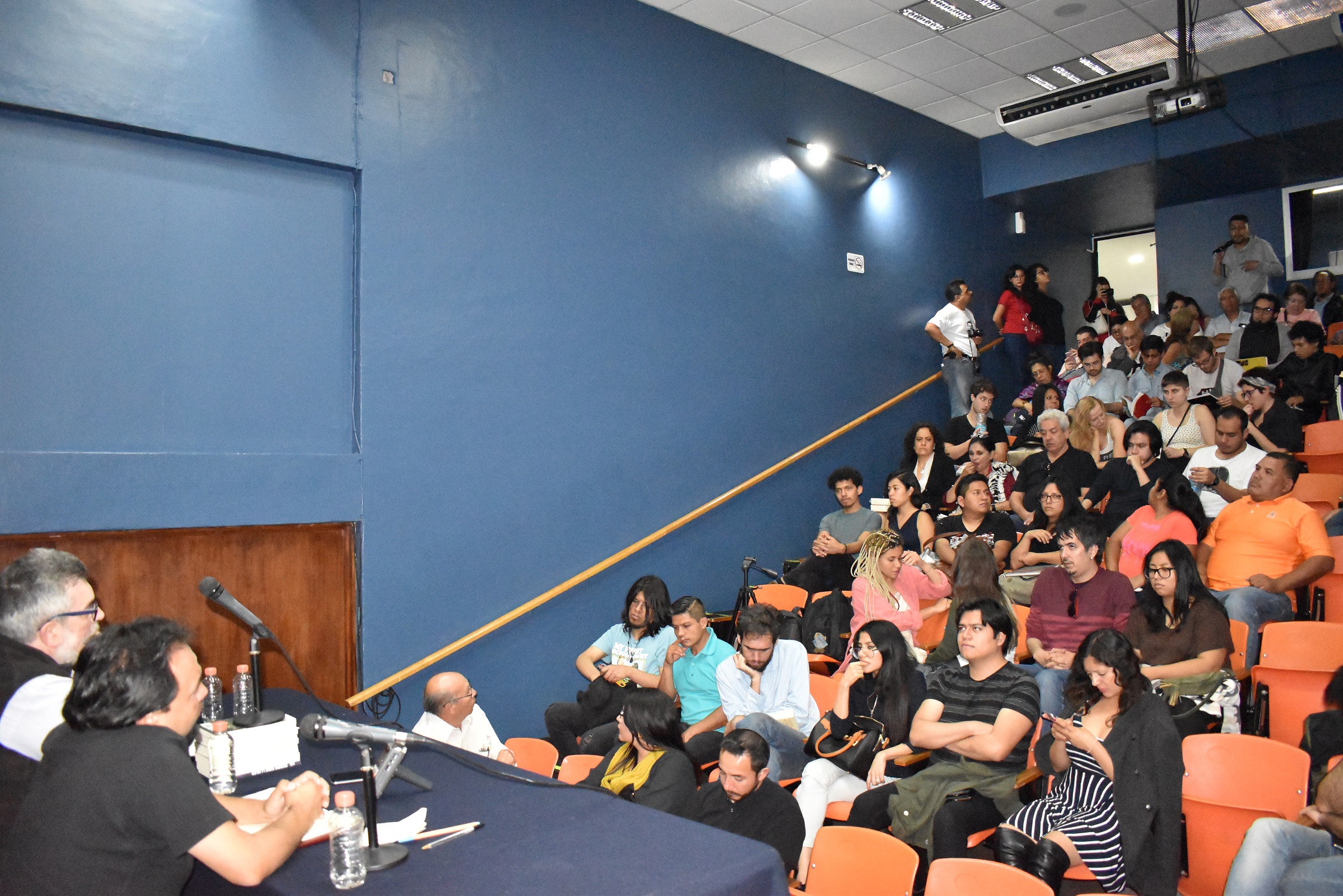 Comrades and visitors attended from all over the Americas, and beyond / Image: La Izquierda Socialista

The Third Congress was held in October 1921, and it was there that Lenin and Trotsky launched an offensive against a strong ultra-left tendency. But they never used organisational methods, they instead used arguments to convince their opponents. Trotsky explained that there was an objective change in the situation after a series of defeats in the revolutionary processes.

After this debate, the tactics of the United Front were reaffirmed, and since illusions in reformism were again developing, the general slogan was: to the masses for a united workers front. They insisted on the complete independence of ideas.

The process of degeneration of the Communist International occured in parallel to the process of bureaucratisation of the Soviet state and the Russian party. The Soviet Union was a backward peasant country, which was devastated by civil war. Its only hope of survival was to extend the socialist revolution outside its borders. But the defeat of the European revolution of 1919-1921 by the betrayal of the Social Democrats and the inexperience of the national leadership of the communist parties, which were very young, caused a step backwards within the ruling layer that developed bureaucratic tendencies, nationalist deviations, and a deep scepticism towards world revolution. The capitalist stabilisation of 1922-29 drove away the pressing revolutionary perspective. Moreover, the beginning of Soviet economic reconstruction, deepened the revolutionary scepticism of the ruling layer... presented the basis for a petty-bourgeois way of life, "material privilege for bureaucracy".

Alessandro then detailed the birth of the left opposition in 1923, led by Trotsky and the most advanced cadres of the party. In the Fifth Congress in 1924, the opposition still asked to defend their opinions by opposing the theory of socialism in one country.

The opposition documents, at the Sixth Congress, allowed it to be extended outside Russia, as was the case in Canada and the United States.

In 1935 there was a new congress of the International that formalised the politics of the popular fronts. In the end, the International had a disgraceful end, being dissolved in 1943 as a gesture of goodwill to the imperialists.

Alessandro concluded by saying that 100 years later we have to learn these lessons, especially when we see so many wonderful mass movements, from Iraq and Lebanon to Latin America.

At the time, the Communist International generated terror and hatred in the capitalist class, and Alessandro said that we should extend their ideas and methods internationally. We need a strong Marxist tendency:

After prolonged applause from the audience, the discussion began. Comrade Adrián Alvarado from Mexico spoke of the impact of the Communist International in this country, while comrades from Venezuela and Colombia, countries that have taken action in the class struggle, were also heard. 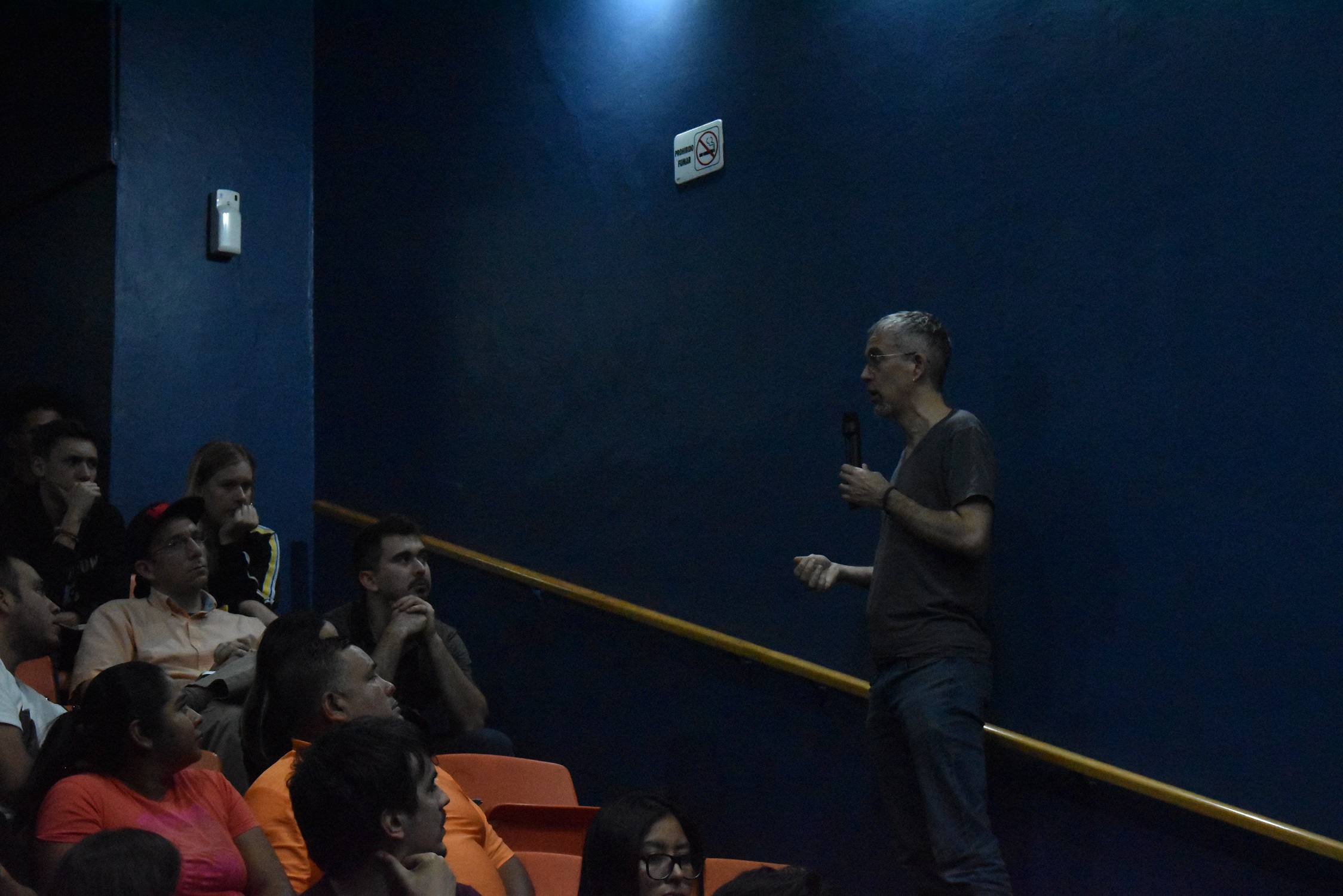 Comrade Jorge Martín highlighted how, for the Bolsheviks, the construction of the International was a central task that involved the main cadres who were preparing for the political battle, highlighting the democratic method of their discussions. He also pointed out that, for Stalinism, it is very difficult to vindicate the tradition of the Communist International, as they denied their programme and ended up killing many of the comrades who founded and built it.

There were questions from the audience about how to confront the struggles that occur today in Latin America and our position in the face of new movements such as the feminist struggle. In his response, Alessandro Giardiello said there were many people who showed their support for the Russian Revolution but had not understood the method of the Bolsheviks. The first thing is to explain the correct slogan, the need to achieve socialism, and secondly, not to mix the movement with the interests of the bourgeoisie, as happened with the agreement between Piñeira and the opposition parties. One has to participate in the struggles while fighting against the reformist currents that are being created. We have to fight, as we have always done, with our flags raised, without hiding them. In the women’s struggle, as well as when we fight racism or for sexual rights, we are not for division, but for the unity of the exploited. He highlighted the struggle that is taking place today in Colombia after years of state repression and the crazy policy of guerrilla warfare, but where the working class has carried out two general strikes in a week.

In Chile, the labour movement was crushed but today it begins to resurface. Also, what is happening in Mexico is interesting. Despite all the limitations that AMLO’s reformist government has, Marxists must intervene by explaining the socialist programme. Marxists also intervene in universities on an independent platform. He concluded by saying that we have to rebuild the Communist International. Sooner or later with this rebuilding, we will be able to seize power to build a socialist world.