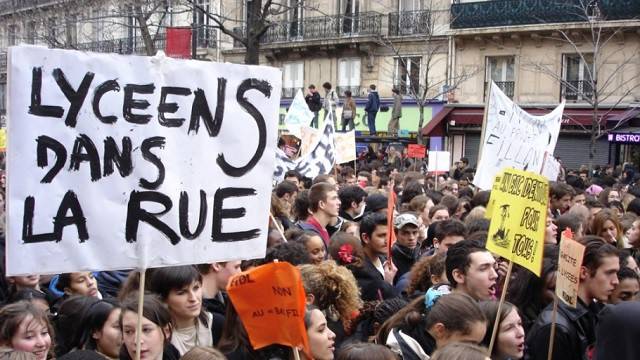 We publish here an eye-witness account of Marxist students from Belgium who participated in the March 31st general strike in France, and the subsequent "Nuit debout" movement occupying squares in French towns and cities, reminiscent of the movements in North America, Southern Europe and Egypt five years ago.

We arrived in Paris last week, to take part in a movement against the changes to labour legislation. This law, called the "El-Khomri" law (the name of the Minister for Labour) aims to make bad contracts, along the lines of temporary staff or zero-hours contracts, the norm for all new workers. Collective sackings will also be made more easy. We participated in the national day of action on Thursday, March 31. The next day we took part in the general assembly of Paris 8 in Saint-Denis, showing our solidarity.

The origin of the demonstrations

In light of the terrorist attacks in Paris and the subsequent state of emergency, the government thought they had an open goal. They wanted to use this chance to vote through a law greatly disapproved of by the population (around 70% of french people would vote against the law.) But the government’s gamble had not made consideration of the electric and energetic atmosphere, particularly prominent among the youth. From the beginning, young people scorned the banning of protests which accompanied the state of emergency, notably during the demonstrations during the Paris climate summit in November and December.

Since the Minister for Labour El Khomri announced the law, university students, school students and young workers have been drawn into the response. They were encouraged on social media to organise a day of action on March 9 across the entire country. They organised gatherings and student assemblies. They also sent out a call asking the rest of the working population to participate.

The day of action on Thursday March 31 was therefore the fourth national day of action. It was a great success, with as many as 1.2 million people taking to the streets across the country. This is double the number from the previous day of action a week before. This shows that the movement is gaining in power. In Marseilles, there were 120 000 protesters, in Toulouse, 100 000. In Paris, a crowd decided to march despite the pouring rain. Simultaneous to these demonstrations different sectors went on strike: rail workers, steel workers and dock workers took the decision to stop working. 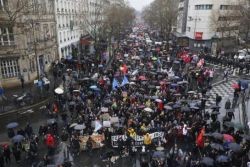 Since the beginning of the protests the gatherings of students and school students were disrupted by displays of force and violence. In the hours leading up to the demonstration, many of the students’ group marches were blocked by the police who surrounded the young people, threatening them with arrest and baton blows. During the demo itself, police provocateurs were present, trying to find an excuse to charge the group of young people at the front of the demonstration. This systematic repression was in order to intimidate the youth. However, it had the opposite effect: students are now even more determined and videos of police violence are circulating around the country, leaving nobody indifferent.

In past weeks, all of our efforts were directed at organising a successful day of action on March 31. As predicted, the government has not budged on its proposal despite the size of the movement. As a result, as well as celebrating success we must ask the question ‘where next for the movement?’. The leadership of the largest union, CGT, has immediately announced new action days on the 5th and 9th of April. Although everybody understands the necessity of new demonstrations, this proposition has been welcomed with some suspicion. 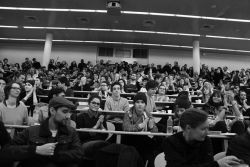 After all, the leadership of the CGT union has not played a leading role in the movement from the beginning. On the contrary, in the early days, they did not even call for any action whatsoever. It was the pressure of the organised students who pushed them into action, allowing CGT activists and those from other unions to move, driving the union leadership to actually set out a solution. Even when they openly gave the movement support, it was not very enthusiastic. The strikes were not really supported from above. They were won by the persuasive strength of union activists and the student committees who intervened in their workplaces.

In this sense, the proposition of action days on the 5th and 9th of April is another sign that the higher ups in CGT are acting more as an obstacle to the development of the movement than a necessary catalyst for it. After all, with the authority and the organisation they possess, they hold all the keys to support the demonstrations. The best course of action at this stage would be to prepare for a strike, lasting until the recall of this law. That is not what the CGT leadership has proposed.

This criticism was – more or less explicitly – at the heart of the decision to occupy the city squares on the evening of March 31. This call was taken up in many big cities. In Paris two or three thousand were present in the Place de la Republique. Participants failed in their immediate objective of effectively occupying the squares due to the lack of mass support and the intervention of the police. However, this action signifies that the CGT leadership, who seem to want to slow down the movement, do not necessarily control the whole movement. Just as when the movement began, it can continue to surprise us…

New general assemblies were organised in many Parisian schools the day after the demonstration, in order to evaluate the day of action and to decide the next steps of the movement. We went to the general assembly of Paris 8, a campus situated in the working-class district of Saint-Denis. This campus is one of the epicentres of the movement, which proved itself once again: the hall was filled by more than 500 students and staff. We were allowed some speaking time at the beginning of the meeting to express our solidarity. Below, we have published a written version of our contribution. All of the speakers were limited to one minute, a measure which aimed to give everybody the opportunity to speak. ‘Briefly, but structured and powerful’ was the goal.

We are here in solidarity with your fight. We have come from Belgium, we are students at the Gand university in Brussels. We are part of the Etudiantes Marxistes, which is the student organisation of the International Marxist Tendency in Brussels. This is our newspaper. We also have a presence in France, where we publish Revolution, our paper – because a revolution is what’s necessary.

We have come to support, take part in and gain inspiration from your fight. In addition, we are not the only ones to have come from Belgium: yesterday at the demonstration we saw others coming from Brussels in support. Already, your struggle is resonating across our borders.

We have followed your fight from the beginning. We saw the heavy and paralysed atmosphere after the Paris attacks, the electoral advance of the Front Nationale, etc, and so it is extremely encouraging to see the political about-turn, which has now come massively towards the left! We hope that we will see the same thing in Belgium.

To conclude, we are extremely inspired by your fight. You have very strong traditions of political organisation and student struggle.

Firstly, the general assembly, where students can inform themselves and vote on the future of the movement is a strong tradition. We hope that we will see the rebirth of this system among Belgian students.

But also the struggle for unity and strong links between students and workers is inspirational; it is this which creates the strength of the movement.’