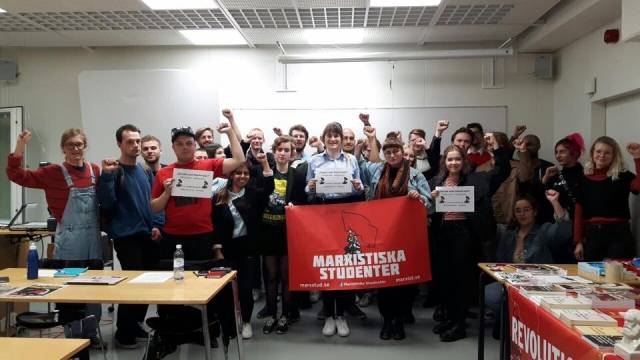 Marxist Students kicked off the autumn in more areas than ever before. For the first time we held meetings in Lund and Helsingborg, amongst others, but also at Södertörn University in Stockholm. There is an enormous and growing interest for revolutionary ideas among an important section of the youth which will be obvious from the following reports from all over Sweden.

Marxist Students at the University of Stockholm held the first meeting of the term just one week after the schools started. This was titled “Marx was right” and it dealt with the crisis of capitalism and the socialist way out. There was a lot of interest in the meeting with 45 attending. In her lead off Ylva Vinberg explained that Marxism has been declared dead countless times, but that its ideas are now more relevant than ever. Only 8 people now own more than the poorest half of the world’s population according to Oxfam. There is an alternative – a socialist revolution. The discussion primarily dealt with the potential for technological development that will be freed under socialism.

Marxist Students in Stockholm have also started organising at Södertörn University where the first meeting was also held under the title of "Marx was right". There were 13 in attendance and many more have already expressed interest in coming to the second meeting. All the necessary signatures have been collected to start an official student society at the University which will be launched in the coming weeks. After the first successful meeting, more will be held this autumn. The next one will be on the subject of the revolutionary women's struggle!

After having first organized a meeting in defence of the Venezuelan Revolution, with 60 participants, Marxist Students in Gothenburg have started the autumn term with two meetings on the subject of “What is Marxism?”. The first was held at Humanisten and the second at Campus Haga. These are two separate campuses where we are active. There were 10-15 attending each meeting.

Fredrik Albin Svensson pointed out in his lead off that more than half of all europeans between 18–34 years of age, according to an EU-poll, now say that they would actively participate in a large-scale uprising against those who are in power, if they got the chance. This is a fundamental change in the consciousness of millions of young people as a consequence of the crisis of capitalism. This is one of the things that prepares the way for a coming revolution, and it is the task of Marxism to get ready for it.

On Thursday the 7th of September Marxist Students started their meetings in the autumn term in Umeå and the first subject was “What is Marxism?”. Stefan Kangas described in his lead off how capital becomes more and more concentrated in fewer and fewer hands as well as why capitalism goes into crisis. He also explained how the working class can not only challenge the bourgeoisie but also overthrow capitalism. The discussion dealt with why capitalism goes into crisis, the cuts in Sweden today and what the socialist alternative looks like.

On Monday the 4th of September the Marxist Students of Lund University held their first meeting ever. The invited speaker was Fredrik Albin Svensson, from the editorial board of Revolution, who spoke on the subject of “What is Marxism?”. Close to 40 people attended the meeting curious, excited and eager to discuss.

In his lead off Fredrik explained how the theory of Marxism can be applied to society today both in Sweden and in other countries. The recent political developments, class struggle and the effects of the global crisis can only be understood through dialectical materialism which explains, amongst other things, that humans learn through their experiences. During an epoch of capitalist crisis, these experiences are of cuts, falling living standards and political chaos which gradually forces more and more people to draw revolutionary conclusions.

The day after the meeting in Lund 20 people started up Marxist Students on Campus Helsingborg with a meeting on the same subject: “What is Marxism?”. The meetings in Lund and Helsingborg will be followed by reading groups on the Communist Manifesto.

The results of the first week’s meetings of the autumn term shows that, even though the crisis hasn’t hit Sweden with full force yet, and although there is not yet any large scale class struggle taking place, the interest in Marxism is very big and it is growing. This will provide the Marxists in Sweden with great opportunities to build our forces.

It is more than clear that the place to be for any revolutionary minded young worker or student is with the IMT Sweden (Revolution) and Marxist Students. Join the fight for socialism, get organized and let’s build the necessary forces to overthrow this rotten capitalist system!

Contact us at a our email info@marxist.se or find out more at our website marxist.se if you are interested in joining or want to know more!