Details
Our Correspondent in Lahore
26 January 2018 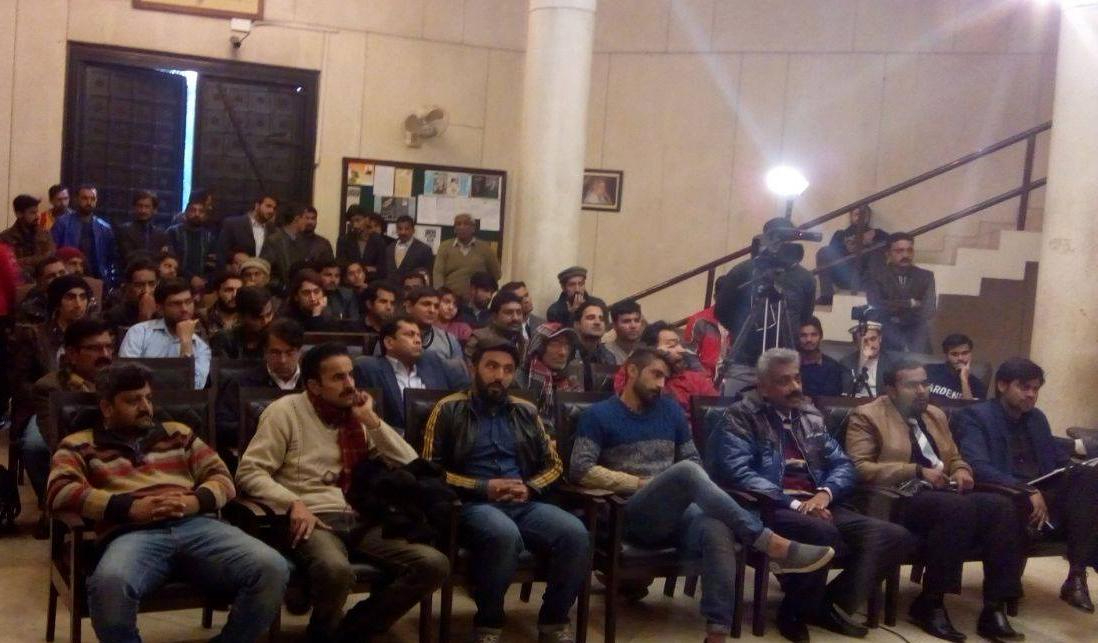 On Thursday, 25 January a lecture was held in the Al Hamra Hall, a well known cultural center in Lahore on the topic of “Marxism and Literature”, by the British Marxist Alan Woods, organized by the Progressive Youth Alliance.

More than 150 students, young lecturers, poets, short story writers and others attended the discussion. The hall was completely packed. Many participants couldn’t find seats and attended the discussion while standing and some were sitting on the stairs. Many others were unable to attend the discussion because hall was full to overflowing. Some people had travelled long distances to attend this Lecture. A delegation of more than ten young Lecturers and school teachers had come from Gujranwala traveling a distance of more than 60km.

The meeting was chaired by Zain ul Abideen, National Organizer of the Progressive Youth Alliance. He introduced Alan Woods to the audience by describing his writings on Literature and Art along with his works on Politics and Philosophy.

To begin the meeting revolutionary poetry was recited by poets including Paras Jan, Imran Hashmi and Ali Shazif Bukhari.

Alan Woods opened the discussion by his remarks on the revolutionary poetry and Literature of this region. He said poets like Faiz Ahmed Faiz and Nazim Hikmet played an important role in the class struggles in their countries. He pointed out that very few people in the West know about the huge treasures of Literature of this land and have forgotten the important role played by poetry in revolutionary struggles in their own countries in the past. He said, “that poetry is an important weapon in these struggles and poets like Faiz had used this weapon very effectively. Today the revolutionary poets of Pakistan are the children of Faiz.” He also commented on the rich history of literature in the Indian Sub-continent, beginning with epics like Mahabharta. He expressed regret that he was only able to read these works in English.

“Poetry can never be adequately conveyed in translation. Either you translate literally, in which all the poetry is lost, or you have to recreate the original, resulting in an entirely different work. Since I am able to read most of the main European languages, I will confine my remarks today mainly to European Literature. That is itself a vast task to achieve within the short time available to me.”

Alan began by explaining the history of Literature from a remote period when writing was still not discovered. The earliest kind of poetry known to us is orally recited poetry, especially early epic poetry such as Homer in Greece. This oral poetry was the means by which traditions, religious beliefs, laws and customs were transmitted from one generation to another. Passing rapidly through the literature of Greece and Rome, Alan explained how the decay and fall of slave society led to a collapse of culture, which only began to revive in the later Middle Ages with the emergence of a new bourgeois culture in the towns, particularly in Italy and the Netherlands. This was the basis of the Renaissance which anticipated the bourgeois revolutions in Holland and England.

Alan pointed to the revolutionary role played by the great English poet John Milton, the author of Paradise Lost, who also wrote numerous revolutionary pamphlets such as the areopagitica, a fierce defence of the freedom of speech and liberty of the press.

Alan explained the relationship between French Classicism and the Absolutist regime which was blown apart by the French revolution of 1789-93. This prepared the ground for the enoromous flowering of Literature and Art in 19th century France and a new school of literary realism. Alan pointed out that one of Marx’s favourite authors was the French novelist Balzac. He considered that one could learn more about French society after the revolution by reading these novels than from any history book. “Politically speaking Balzac was a conservative. But his novels held up a mirror to the French bourgeois society and mercilessly exposed all its vices,” Alan said.

Finally, comrade Woods underlined the colossal social and cultural liberation that was brought about by the October revolution in Russia. He pointed to the work of the Bolshevik poet Mayakowsky as a striking example of this. “Propaganda, of course, can never be great art. Genuine art must express the inner feelings of the artist or the poet. But in the case of great poet like Mayakaowsky, his revolutionary convictions are expressed in a very graphic way in his poetry.“ Alan then proceeded to recite one of Mayakowsky’s poems “Our March” in English and in Russian, showing the powerful effects that this great poet was able to achieve.

“The years following the October revolution were years of many cultural experiments with different schools of thought that freely contended with each other. But this flowering of Literature and Art was suffocated by the Stalinist counter revolution,” he said.

In his concluding remarks Alan emphasized that Art and Literature must be free of all external constraints. The work of the artist or poet cannot be dictated to by the state, religion or political parties or by the dictatorship of Capital. “Capitalism is profoundly hostile to Art and culture,” Alan stated. “Somebody once told the English poet Robert Graves: ‘there is no money in poetry.’ To which Graves replied: ‘no, but there is no poetry in money’.”

True artistic freedom can only be achieved through a social and cultural revolution. Only a socialist revolution can release the colossal cultural potential that is latent in society, Alan said. He appealed to everyone present – writers, journalists, poets and intellectuals to join the working class in its struggle to overthrow the present corrupt and degenerate capitalist system and create the conditions for a new society that will carry civilization and culture to new and unheard of levels.

This wonderful and profound exposition, which was unlike anything ever heard before in Pakistan literary circles was met with enormous enthusiasm by the entire audience.

A brief session of questions and answers followed, afterwards comrade Alan gave a masterly reply in which he invited everyone who agreed with the ideas he had expounded to join the Lal Salaam, the Pakistan Section of the IMT.

More than one hundred people signed the forms that were prepared by the comrades giving details of the activities of the IMT and a very large quantity of Marxist books and other literature was sold at the well stocked book stall. This event has had a big impact in intellectual circles in Pakistan. It is being widely shared on Facebook and social media where it has sparked off a new ferment of debate on the subject of Marxism and Literature. It is yet another success story of the Pakistan Marxists and the IMT.