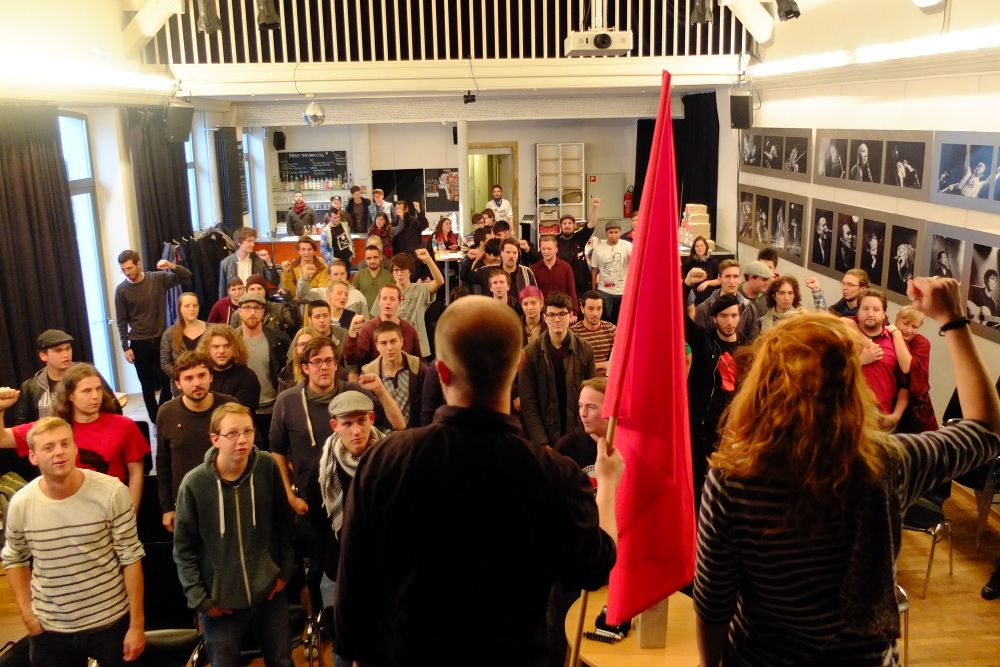 Around one hundred young people gathered last weekend in Biel for the Sixth Annual Marxist Autumn School. Compared to 60 people attending last year, this is a big step forward for der Funke/l’étincelle, the Swiss section of the IMT. Also present were international guests from five different countries. The event was bilingual in German and French, and took place over the course of the whole weekend. We were also proud to be able to present a newly printed republication of The Third Front, by Willi Münzenberg. The success of the school has shown once more the increasing interest in Marxist ideas in Switzerland.

The different discussions covered historical, theoretical, and current topics. The school started with a plenary session on world perspectives. Comrade Francesco Merli spoke on the development of the capitalist crisis on a world scale and the impact this has on the political and social stability of our society. He outlined the dead end in which capitalism is stuck, and with it, reformist solutions to the problems facing the working class today. The discussion covered many important questions, like the impact of the refugee crisis on European politics, the alleged threat of fascism, and the phenomenon of the rise of left reformism in many countries.

In parallel sessions in the afternoon we discussed past and present topics concerning Switzerland. The historical meeting of the antiwar coalition of Social Democrats during WWI in Zimmerwald 100 years ago, and only forty kilometres away, was the focus in one of the lead-offs. The speaker pointed out the political contradictions in this coalition and the difficulties of the Zimmerwald Left to preserve the revolutionary ideas of Marxism and build the forces to end the war, and capitalism with it. Among them was Willi Münzenberg, a German Social Democrat who collaborated with Lenin during his time in Switzerland and played a key role in building a revolutionary youth international. The book we published and presented at the school is filled with anecdotes and political conclusions from that process. It was well received by many of the people present. On the same afternoon, discussions on the development of the Swiss economy and the situation of apprentices were held.  It was shown by the speakers that even though Switzerland as of today is not as heavily hit by the crisis of capitalism, the Sword of Damocles of the European crisis is used by the bosses to attack workers and impose severe cuts. This, combined with the dependence of the Swiss economy on the world market, will inevitably lead to an increase of class struggle at some point. 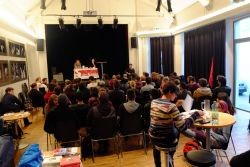 After a night of relaxed discussions and socialist songs, we started Sunday with the presentations of our international guests. Comrade Roberto Sarti from "Sinistra Classe Rivoluzione", the Italian section of the IMT, spoke on the destruction of the Italian left, the failed attempts to rebuild the communist forces in Italy in the Communist Refoundation Party, and the urgent need for a genuine workers’ party in Italy. Comrade Angelos Irakleidis from Greece explained the perspectives for the Greek class struggle after the betrayal of Tsipras and the split of SYRIZA, and comrade Jules Legendre from France spoke on the struggle of the partisans in France at the end of WWII and the immediate aftermath.

The afternoon was dedicated to discussions on Marxist theory. An introduction to Marxism, a discussion on the dialectics of consciousness, and a workshop on the question of fascism provided insights on different aspects of Marxist theory.

The full-out success of the school, in terms of numbers and quality of the discussions, is a big step forward in building the revolutionary forces, and it shows that the ideas of Marxism which the IMT represents fall on fertile soil, even in a country like Switzerland.