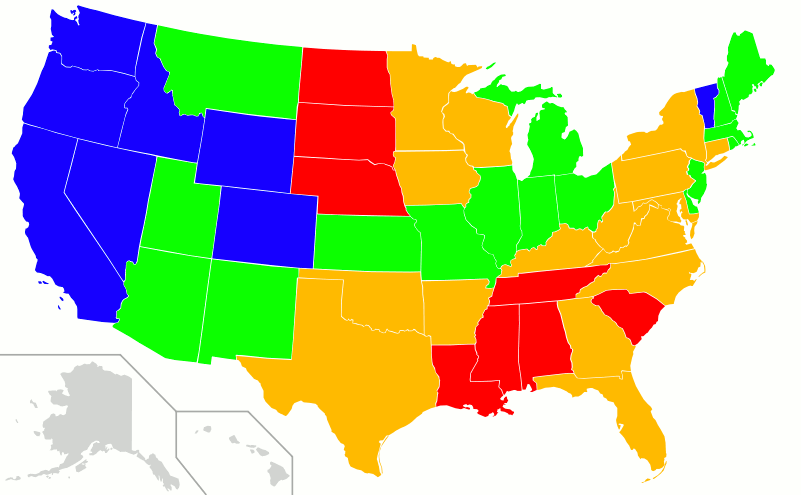 A recent survey shows that the United States may be becoming both less religious generally and less Christian specifically.  This may come as a shock to some, as over the past decade, the Religious Right has for many people come to represent the public face of the country.  This has been spurred on and encouraged by the cries coming from many liberals over the past few years of an impending “theocracy.”  However, the facts on the ground are quite different, as the American Religious Identification Survey, performed by Trinity College in Hartford, CT, recently proved.

The study finds that the percentage of Americans who self-describe themselves as “Christian” has fallen by over 10 percent over the past 18 years, from 86 percent to 75 percent.  Even more surprising is that “the fallen” are not making their way to other religions, but rather, are almost all entering the ranks of the “non-religious,” a category which has doubled since 1990 to 15 percent.  Over 25 percent of participants said that they do not even expect a religious funeral.  As ABC News points out, “Americans with no religious preference are now larger than all other major religious groups except Catholics and Baptists.”  In fact, the trend toward non-religiosity is the only national trend found in the survey.

Over recent decades, the ideology of capitalist society, i.e. its morality, culture, etc., have been thrown into crisis.  The old ideas, a key linchpin of the system, no longer carry the weight they once did.  However, this crisis of ideas is merely a reflection or by product of a corresponding crisis of the capitalist system itself, which finds itself at an impasse.

In fact, apocalyptic visions of the “end of the world” are merely the spiritual reflections of social systems which have outlived their historical usefulness.  They reflect the semi-conscious realization of “prophets” that the world as it exists, or rather social relations as they exist, cannot continue as they have in the past. We have seen no shortage of these harbingers of doom in recent years, typified by the popularity of the Left Behind book series.

However, despite the attention given to the “non-religious” findings of the survey, another finding shows that the trend is not one-sided and linear, but rather, complex and contradictory.  While the “non-religious” have increased and the mainstream Christian denominations have decreased, evangelical or “born-again” Christians have also increased.

This expresses a trend which we, as Marxists, would expect, but which the mainstream media seems completely unable to explain. The reason is that the crisis of the capitalist system finds expression in a crisis of ideas, a polarization both to the right and to the left, not simply a progressive, linear rejection of religion.

As the crisis continues, this will intensify further.   Tony Perkins, of the Family Research Council, is somewhat correct, albeit one-sided, when he tells CNN that, “As the economy goes downward, I think people are going to be driven to religion.”  Many others will turn away from religion altogether, but the crisis will continue to push a certain layer into the arms of the fundamentalists, further exacerbating the polarization.

Marxism as a philosophy is atheistic, but our ideas in relation to religion are far more complex than the caricature of “Godless communists” usually portrayed in the media.  If people know anything about Marx’s ideas on religion, chances are they know that he said that religion was “the opium of the masses.”  He did in fact say this, but what he actually meant goes far beyond an isolated quote.

The so called “new atheists” are following in the footsteps of the Young Hegelians - criticising religion without offering a solution to the suffering of the masses. Photo by Zoe Margolis. The quote is from Marx’s Introduction to A Contribution to the Critique of Hegel’s Philosophy of Right, written in 1844.  In it, he takes up the German critics of religion, a trend led by Ludwig Feuerbach, Bruno Bauer and others, who focused their attacks, not on existing social relations, but on religion itself.

He points out that:

“Man makes religion, religion does not make man. Religion is, indeed, the self-consciousness and self-esteem of man who has either not yet won through to himself, or has already lost himself again… This state and this society produce religion, which is an inverted consciousness of the world, because they are an inverted world… The struggle against religion is, therefore, indirectly the struggle against that world whose spiritual aroma is religion… Religious suffering is, at one and the same time, the expression of real suffering and a protest against real suffering. Religion is the sigh of the oppressed creature, the heart of a heartless world, and the soul of soulless conditions. It is the opium of the people…

As Marx explains, the 19th Century German critics of religion had the whole thing turned upside-down.  Religion is merely the reflection of suffering in this world, inequality in this world, injustice in this world.  So long as these conditions exist, religion cannot simply be “abolished,” because it has a material base.  It is, as he put it, the “sigh of the oppressed creature.”

Today there are many people, such as the so-called “New Atheists” or “antitheists,” who continue on the path of the German critics.  Representatives of this trend include Sam Harris, Richard Dawkins, and Christopher Hitchens. While the popularity of this trend, particularly among the youth, can be seen as a generally positive development, as it is “in embryo, the criticism of that vale of tears of which religion is the halo,” it does not and cannot offer a solution to the “real suffering” of millions of people living under capitalism.

In other words, religion cannot simply be abolished or criticized out of existence.  As Marxists, we believe that if you eliminate the conditions of misery that most of humanity lives under, that is, if we create conditions for “real happiness,” then over time, the need for “illusory happiness” will disappear on its own. If you do not agree, that is perfectly fine with us.  In the future we can debate all we want about life after death, but in the meantime, we should work together to create the conditions for a life before death.

Mikhail Bakunin, a 19th Century Russian anarchist, proposed a Program of the International Alliance of Socialist Democracy, which included as its first point: “The Alliance declares itself atheist; it wants abolition of cults, substitution of science for faith and human justice for divine justice.”  In the margins of his copy of this document, Marx wrote: “As if one could declare by royal decree the abolition of faith!” This shows that those who believe that Marxism argues for a restriction of religious rights are misinformed.

Quite the opposite.  We believe that there should be, in the words of Thomas Jefferson, a “wall of separation between church and state.” But we also believe that religion is a personal matter, between each person and his or her own conscience, not something to be banned or encouraged by the government.

In the struggle for a better world, we have far more in common, in terms of our goals and class outlook, with a liberation theologist in Latin America or a religious working class family in Ohio, than we do with some of the leaders of the “New Atheists,” such as Christopher Hitchens, a vocal supporter of the Iraq War.