Marsinah (1969-1993) was an Indonesian worker who was kidnapped by the army and brutally murdered on May 8th 1993 because of her involvement in the strike action at her workplace. She led a strike with 500 of her fellow workers, knowing full well that under the dictatorship of Soeharto her life was in danger. Marsinah has since become a symbol and inspiration for the workers’ struggle in Indonesia. Let us celebrate International Working Women’s Day and remember Marsinah by rolling up our sleeves to fight for socialism, the only way out of the misery of capitalism.

“Workers haven’t got any justice from the government. Workers have to unite their power, they have to unite, disregard individual interest, and put forward the interests of the workers and the masses.” Marsinah (1969-1993) 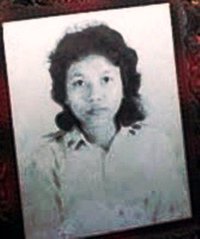 The urban situation which is rampant with competition has made the people who live in it stronger. Especially the life of the workers in the factories who everyday have to chase production targets set unilaterally by the bosses for their own profits. Therefore, it is not surprising that Marsinah, an unsuspecting young girl from a village, stood bravely in the front line of struggle for the welfare of the workers. Bravery has overcome subordination to destiny!

17 years have passed since the murder of Marsinah and there hasn’t been any fundamental change in the welfare of the workers. Now, the livelihood of the workers has become even worse and uncertain. Job security and decent wages for workers are still far from reach. This can be seen from the number of government laws that are not favourable for the workers.

During the New Order regime, when the workers demanded their rights and went on strike, they always had to face the army. After the fall of the New Order regime in 1998, almost everyone was hoping that there would be a change in the labour law for the better. However, things in fact have gotten worse. Now the workers are no longer facing the army’s bayonets (although sometimes there is still violence against the workers who struggle); they are now faced with “neo-liberal” policies of the Indonesian government. The free market has become more rampant in Indonesia and it has become the chain that binds the workers and exploits them under the wheels of the factories.

Marsinah was born on April 10th, 1969. The second child of three siblings, she was the fruit of love between Sumini and Mastin [most Indonesians do not have family names]. Since she was three years old, Marsinah had been left by her mother who died. Baby Marsinah was brought up by her grandmother – Pu’irah – who lives with her aunt – Sini – in the village Nglundo, Nganjuk, East Java.

She finished her elementary school at SD Karangasem 189, district Gondang, and her middle school at SMPN 5 Nganjuk. Since she was young, this dark skinned girl had tried to be independent. Realizing that her grandmother and aunt found it hard to support the family, she tried to use her spare time to get extra income by selling snacks.

In her family, she was known as a diligent kid. If there wasn’t any school activity, she helped her aunt in the kitchen. Coming home from school, she usually helped bring food to her uncle who was working on the rice field. “She often brought bontontan [food] to the field for me. When it was hot or raining, usually she used a banana leaf as an umbrella,” said Suradji, Marsinah’s uncle. Different from other kids at her age who liked to play more, she filled her time with studying and reading. Even when she went out, it was only to watch TV news.

When she was in high school, Marsinah had become independent by boarding at Nganjuk city. While being a student at SMA Muhammadiyah, she was known as a smart student. She was a keen student and was always top of her class. Her life took a different route when she had to accept the fact that she couldn’t afford to continue her school to a higher level, just like millions of youth in Indonesia who couldn’t finish their schooling because they didn’t have the money.

The poverty that her family was facing forced Marsinah to leave her village. There was hardly any job in the village. It had become more difficult to find a job working on the field. Now ani-ani – a traditional harvesting instrument – had been replaced by the sickle which was more efficient and didn’t require as much labour as before. The development of technique, instead of improving the welfare of the people, has made more peasants superfluous. It is no surprise that the smell of sweat mixed with the mud from the field no longer permeates the air in the village. The grunting sound of oxen plowing the field has been replaced by the sound of a tractor machine.

There was no other choice than going to the city. Marsinah sent her job applications to a number of companies in Surabaya, Mojokerto, and Gresik. She was accepted to work at a BATA shoe factory in Surabaya in 1989 and started her life as a worker like millions of peasants who have been dragged to the factories because of the dire poverty in the rural area. A year later she moved to the Empat Putra Surya watch factory in the industrial area of Rungkut that later relocated to Sidoarjo. Marsinah was the first generation of her family to become a factory worker.

Her failure to continue to university didn’t kill her spirit to study. Marsinah believed that knowledge can change one’s life. Her high spirit to study was seen from her habit of collecting information. She liked to listen to news, both from radio and TV. Her appetite to read was also big. In her spare time, she often made news clippings. For this latter activity, she even set aside her meager wage to buy used newspapers and magazines, even though her wage was barely enough to live.

She was known to be honest and liked to help her colleagues. She was often asked for advice from her troubled friends. If there were any sick friends, she always managed to visit them. Moreover, she often helped her friends who were treated unfairly by the bosses. She was also known to be brave.

At least these two qualities – bravery and solidarity – equipped her to be the vanguard of the struggle. In mid-April 1993, the workers at PT, CPS (Catur Putra Surya) – where Marsinah worked – welcomed the news of an increase in the minimum wage according to the Instruction of the Governor of East Java. In that Instruction, companies were required to increase the wages of their workers by 20%, however this instruction was ignored by the PT, CPS because it would cut into their profit. This created discontent amongst the workers.

This discontent was transformed into a struggle. On May 3rd 1993, workers of PT, CPS went on strike and demanded a wage increase according to the Instruction of the Governor of East Java. That same day, Marsinah went to the office of the Department of Labour in Surabaya to find information about the regional minimum wage. This data was what Marsinah wanted to show to the bosses to justify their demands.

On May 4th at 7am, the workers of PT, CPS held a demonstration to put forward their 12 demands. All the workers from the three shifts got together in the morning and together forced their way into the factory. Security guards tried to block their way. They also swing their batons wildly and ripped the posters and banners of the workers while accusing the workers of being PKI [communist].

The conflict didn’t end there. On May 5th 1993, 13 workers were summoned to the District Military Command (Kodim) of Sidoarjo. There, the army forced them to sign letters of resignation. The 13 workers unwillingly accepted the resignations because of physical and psychological pressures. Two days later, 8 more workers were fired at the same location. The Law lost its teeth before the army’s bayonets.

Marsinah knew very well that what she and her fellow workers had been facing was to be expected in this country which is owned by the bosses. From the news she had read, from the complaints of her fellow workers, from the anger of the workers, and from what she had witnessed with her own eyes, all these told her of the problems within society.

Marsinah, with her spirit of solidarity, went to the Kodim of Sidoarjo by herself that same day to ask about the fate of her 13 friends. Around 10pm, Marsinah disappeared. Her friends didn’t know her whereabouts until May 9th when her body was found.

Show trials and investigations followed with no one held responsible. From the regime of Soeharto, Gus Dur, to Megawati, the case of Marsinah’s death was again and again resurrected, but to no avail, as if the Law in this “democratic” country has been buried along with the body of Marsinah. Even though no one was brought to justice, the workers know very well who was to blame and they don’t need the bourgeois courts to tell them who is responsible for the death of Marsinah. It is the capitalists who are at fault, along with their lackeys in the police force, courts, parliament building, army, etc. Workers have given their verdict with their conviction to fight against capitalism and bring socialism to Indonesia.

Marsinah was a fighter, crushed by the ruling regime that is afraid and worried of the workers’ resistance. However, the spirit of Marsinah cannot be crushed. Her spirit will rise high and become a fire that will burn to ashes all forms of injustice.

We have all become a witness. Now and tomorrow, we will keep telling a story about the injustice in Indonesia, about our fallen comrade, about a woman worker who was not afraid to lose her life for her belief in workers' justice. Let us remember Marsinah by rolling up our sleeves to fight for socialism, the only way out of the misery of capitalism.