Share
Tweet
In the words of Alan Greenspan, “The crisis will mean a return to the ideological struggle between socialism and capitalism. Many of us thought that struggle was over with the collapse of the command economies, but this is not the case.” Reality is indeed coming home with a bang!

“Already, as I try to recall those times, I cannot quite shake off the feeling that they were pages torn from the Arabian Nights. But they were not. The tinselled scenes through which I moved were real. The madcap events actually happened – not once, but every day. And at the moment nobody thought them in the least extraordinary. For that was the New Era. In it we felt ourselves the gods and the demi-gods. The old laws of economics were for mortals, but not for us. With us, anything was possible. The sky was the limit.” (Anonymous Wall Street trader in Atlantic magazine, 1932)

“Unlike with other famous bubbles, the internet bubble is ridding on rock-solid fundamentals, perhaps stronger than any the market has seen before. Underlying the crazy price increases are the foundations of what could become the early 21st century’s leading growth companies… Just because the Internet stock phenomenon looks like a bubble, it isn’t a given that the bubble will burst.” (Henry Blodget, Merrill Lynch’s Internet expert, January 1999.)

Yesterday saw the biggest ever one-day falls on the world’s stock markets. The Dow Jones collapsed by over 800 points at one stage, pushing the index below the 10,000 level. The FTSE 100 suffered its biggest one-day percentage fall since Black Monday in October 1987 and the biggest points fall ever. The Russian stock market fell by 19% and the exchange remains closed. The sell-off engulfed Brazil, Indonesia and Saudi Arabia. The MSCI Emerging Markets Index slumped 11%, its largest daily fall since 1987. This has been one of the worst days yet in the 14-month-old credit crunch. 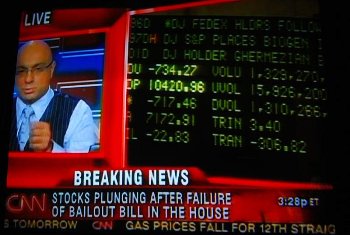 This panic on the world’s stock markets is a reflection of the underlying crisis of world capitalism, as it plunges into the deepest slump since the 1930s. Five European banks have collapsed in as many days. Despite the US $700bn bailout, the crisis continues unabated. The German government was forced to intervene to bail out the real estate giant, Hypo, amid growing panic in the financial sector. BNP Paribas was forced under Belgian government pressure to take over Fortis’s operations in Belgium and Luxemburg. This followed the decision of the Netherlands government to nationalise Fortis in Netherlands. Turmoil has also hit France where Caisse d’Epargne is likely to merge with Banque Populaire, and Italy with Unicredit going under.

The capitalist crisis has spread rapidly throughout the world, affecting large and small. In Iceland, the ice cold winds of economic crisis have forced the government to nationalise one of its biggest banks, Glitnir, while a large investment house collapsed. Yesterday, the authorities drew up sweeping powers to nationalise banks and sack executives as the country faced bankruptcy. The Krona fell as much as 45% against the euro, as the country faced a balance of payments crisis. No wonder. The total assets of Iceland’s banks are almost ten times its GDP, in an economy best know for its cod fishing. Although the country has no obvious connection with the subprime crisis, its banks have overstretched themselves internationally in their search for profits. Now they are trying to sell foreign assets and repatriate pension funds assets, in the biggest crisis the country has ever faced. “In a situation like this it’s turning out that it’s every man for himself,” said the Icelandic prime minister.

The crisis is producing panic everywhere. According to the Financial Times, “Yesterday’s fresh outburst of panic on global markets was final proof that as financial crises go, we are now in the big league. Comparisons with the dotcom bubble or even the Asian crisis of 1997 are inadequate. We must think of 1987 or 1929.”

The article continues: “With hindsight, 1987 was more contained than today. The brief, savage fall in world equities seemed the prelude to a downturn in the real economy. But the real world sailed on, and other asset classes were largely unscathed.

“Compared to 1929, there are two main differences today. First, world policy makers have grasped the scale of the threat more quickly and are prepared for much more drastic action. Against that, the financial system is more complex. And thanks to modern communications, the pace has accelerated. So any policy action is uncertain in its effect and generally out of date by the time it arrives.” (7/10/08, my emphasis)

This sums up the dilemma for the bourgeoisie. They are tobogganing to disaster with their eyes closed. The crisis has clearly spread from the financial sector to the rest of the economy. The difference with 1929 is that the world is far more interdependent and the scale of the crisis is potentially far bigger. “The developed world took on too much debt and that is now being brutally unwound,” explains the FT. “The banks have been the first to suffer, but they are also the means of transmitting that pressure to everyone else.”

Credit, as Marx explained, allows the system to go beyond its limits. It artificially expands the market, which allows capitalism a further lease of life. However, credit has its limits too. It has to be repaid. We are now witnessing a massive contraction. All the factors that developed the boom over the past 20 years are now turning into their opposites. The profits bonanza has crashed. The market is contracting rapidly. Consumer spending is falling. The capitalists cannot sell their goods. The economies of Europe, USA and Asia are rapidly entering a slump. There is a classical crisis of overproduction. Only though these crises can the system survive by squeezing out this fictitious capital, and reducing the living standards of the workers.

In the US, a government report says new orders at US factories tumbled by an unexpected steep 4% in August, the sharpest contraction since October 2006. The claims for jobless benefits have reached the highest since the weeks following the September 11 attacks. Retail sales in the US fell by 0.3% in August and 0.5% in July. There is a sharp fall in mortgage applications and continuing declines in house prices. “The evidence is becoming fairly compelling,” says Brian Sack, vice-president at Macroeconomic Advisers. “We see it in orders for business goods, we see it in consumer spending, we see it in the ISM survey – now we are seeing it in employment.”

“Beyond Capitol Hill”, notes the FT, “the mood of the nation appeared to be changing, towards the realisation of tough times ahead.

“As magazines and television programmes ran grainy photographs from the 1930s, fear of a new Great Depression appeared to outstrip resentment at a supposed bail-out of the Masters of the Universe of Wall Street.” 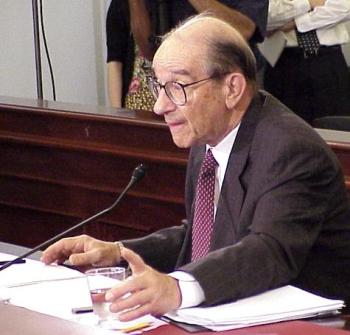 Last week, Alan Greenspan, the former chairman of the Federal Reserve, was giving a lecture in Georgetown. Although largely responsible for the huge speculative bubble, he was now warning of the dangers to capitalism. “The crisis will Alan Greenspan argues that the crisis will mean a return to the ideological struggle between socialism and capitalism.”, he said. “Many of us thought that struggle was over with the collapse of the command economies, but this is not the case.”

The world capitalist crisis, as it deepens across the globe, will wreak havoc. As always, the ruling class will attempt to make the working class pay for the crisis. They will carry through cuts and throw millions out of work to preserve their system. In the events that lie ahead, millions will see the real nature of capitalism in the raw. They will come to the conclusion that this diseased system offers no way forward. They will look to a new solution and readily grasp the ideas of socialism. What Greenspan warned his business friends about, will become reality. We have a duty to rearm the workers’ movement for the titanic tasks that lie ahead and to ensure the victory of genuine socialism over the out-dated system of capitalist exploitation.

To quote an article in last week’s Guardian newspaper:

“‘Capitalists can buy themselves out of any crisis, so long as they make the workers pay,’ said Lenin. It is rarely regarded as common sense to quote him in polite company. Yet as a description of what is taking place right now, it is the most sense I've heard in a long time.”