According to the French trade unions over one million people came out onto the streets on March 31 in over two hundred and fifty cities across France. One hundred and twenty thousand in Marseille, a hundred thousand in Toulouse and tens of thousands in the capital.

Police provocations and violence were rife. Seventy-seven people were stopped and arrested, twenty-two in Toulouse alone. In many cities such as Paris and Marseille, demonstrations went on until late in the evening with occupations of squares, public assemblies, music concerts and film screenings. This was an important day for the movement against the new El Khomri labour bill. Workers and youth throughout Europe should take note of what is happening in France.

The lead was clearly given by the youth, even the very young. High school and university students, those in casual jobs and the unemployed made up about one third of the demonstrations. This confirms the opinion polls circulating in the media, according to which eighty percent of French youth oppose the new labour law.

The strike came after weeks of growth of the movement. As a matter of fact, already by March 17 and 24, thousands of school and university students had taken to the streets, following the blockades, occupations and General Assemblies that took place in schools and faculties in some neighborhoods of major cities.

It is evident that the movement against the "Loi travail" (Labour law) is going well beyond an absolutely justified opposition to casualisation of labour, and is questioning the very economic system.

There is no better answer to all those pessimists of the "progressive left" who say that France, following the success of the National Front in the regional elections in December, had moved permanently to the right. Now, only three months later, everything has changed!

Despite the false statements about the level of participation (390,000 according to the authorities) the government after March 31 has clearly provoked the movement and guaranteed its further continuation: in fact, already new days of action have been planned, beginning with April 5.

Hollande and Valls are counting on the fact that the days of action, organised by the trade union bureaucracy, will eventually tire the workers out, leading to an ebb in the movement, as was the case after the initial victories of the movement against pension reforms in 2010. This is a real possibility, but responsibility lies with all the trade union leaders.

The slogan that needs to be advanced at the present moment is: call an all out indefinite general strike and bring the country to a halt until the Khomri bill is withdrawn.

To build towards such a mobilization what is required is unity of action between students and workers, through a national coordination of the General Assemblies. Despite the evident limitations of the trade union leaders, who are light years away from such a perspective, the rank and file workers understand this instinctively. This is why in all the youth demonstrations we have seen in recent weeks, thousands of workers have taken to the streets at local level alongside the students, even without formal support from the CGT and other union leaderships.

Defeating the El Khomri bill is not an easy task but is absolutely possible. One thing, however, is clear. A new generation is being forged by this experience in France, and also in other countries across the continent. For now, the struggle continues! 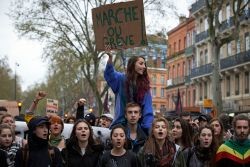