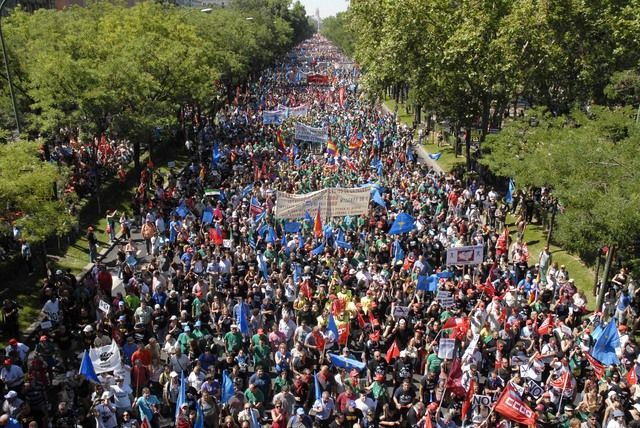 After the repression against the main demonstration in support of the miners' struggle, there were more brutal police charges against another solidarity demonstration in the evening. Today, civil servants have spontaneously walked out of their jobs at a number of Ministries and institutions and blockaded the streets in protest against the new package of austerity cuts.

Over 100,000 people marched in the morning of July 11 to the Ministry of Industry. As the trade union leaders were delivering their speeches, the riot police charged against the back of the demonstration, splitting it into two and creating scenes of panic and chaos. Some 76 people were injured as a result of the brutal polices charges, hit by batons or by the reinforced rubber balls they were firing. It should be noted that they were aiming directly at people, which is illegal. 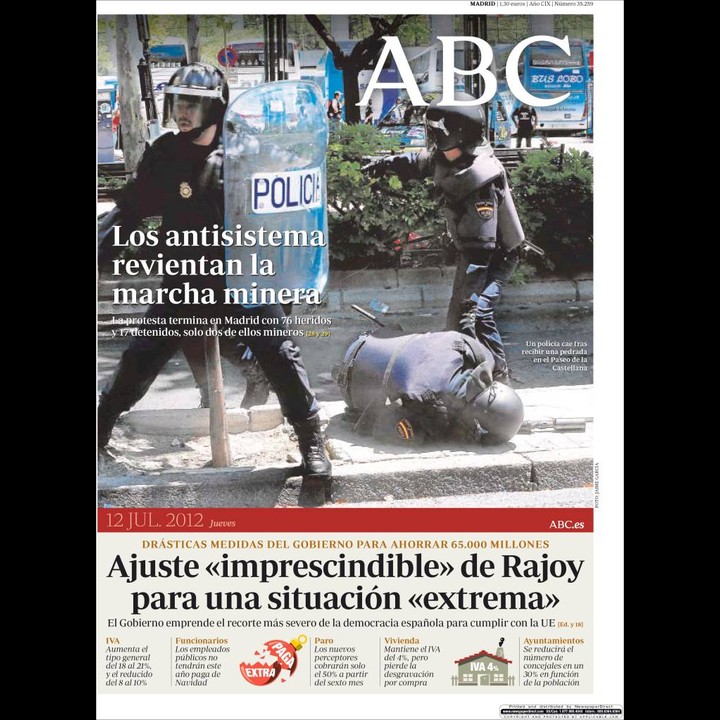 Front page of ABCTypically, the right wing media blamed the miners and "anti-system elements" for the violence, and carefully avoided publishing any of the pictures showing the bloodied faces of demonstrators. The reactionary right wing ABC had one of the worst front pages of all. Just to set the record straight, here's a video which shows the brutal police charges and the reaction of the crowd, and here is another VIDEO showing the police charging even while a woman is on the floor receiving medical aid.

Later on in the day, over ten thousand people took part in another demonstration in support of the miners' struggle, against repression and against the new package of cuts announced by the Rajoy government that same morning. The march had been called by different left wing organisations, collectives and trade unions, and ended up in Puerta del Sol with the singing of the miners' anthem Santa Barbara (see VIDEO).

This march had been heavily policed from the beginning (see VIDEO). After it had already finished, thousands stayed in Sol, together with families enjoying an evening out, tourists, etc. A small group of people threw a few flares at the riot police, which used it as an excuse to violently charge into Sol with the aim of clearing out the square. In the process they beat up people, provoked stampedes, destroyed bar terraces, acting in an extremely violent way (see this VIDEO). A Portuguese tourist captured this video of one of the charges while he was having a drink in a bar next to Sol. A group of skateboard enthusiasts were in nearby Callao, queuing up for the premier of a film about skateboarding and were also attacked by the police as can be seen in this other video.

The callous behaviour of the riot police only added to the anger of the people at the massive austerity cuts announced that morning, the worst in 30 years. The trade union leaders, who have avoided calling another general strike after the success of the one on March 29, were forced to issue a strongly worded statement announcing "generalised mobilisations". However, when the details were announced, these amounted to a national day of demonstrations on July 19 and perhaps another general strike, later on, in the Autumn. This is clearly not enough. 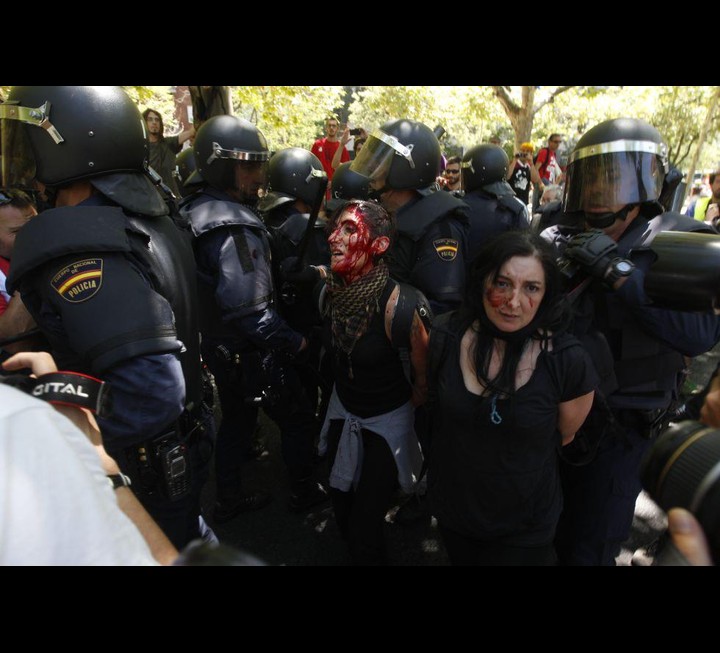 On the one hand the miners have gone back to the regions empty handed, as the government refuses to make any concessions. Industry Minister Soria, who as well as being a reactionary does not seem very bright made a statement to the effect that it is "metaphysically impossible to increase subsidies to mining". Leaving aside the philosophical aspect of his statement, the miners are not asking for any increase in subsidies, just the fulfilment of the agreed subsidies which the government wants to cut by 64%.

On the other hand, the government has announced a package of 64 bn euro worth of cuts (double the amount of the previous package), hitting particularly civil servants and the unemployed, and workers in general through the increase in VAT. It is clear that a national day of demonstrations will not force the government to retreat. What is needed, at the very least, is a 48 hour general strike, linking all sections affected by the cuts and attacks, as part of a sustained plan of mobilisation.

Already today, there were spontaneous walk outs of civil servants in Madrid and other parts of the country, ahead of any actions planned by the trade union leaders, showing the mood of shock and anger at this new wave of austerity cuts. In Madrid, hundreds of civil servants from Ministries in the Castellana avenue (where the miners marched yesterday) walked out of their jobs and blockaded the road (see this VIDEO from El Pais). According to other reports, hundreds of workers from the Gregorio Marañón Hospital and the nearby regional Office for Social Affairs walked out and blockaded the roads, where they were cheered by drivers. Hundreds of civil servants from the National Audience and the Supreme Justice Tribunal stopped work, as they had done yesterday and rallied outside the national headquarters of the Popular Party in protest.

There were similar actions in other parts of the country, like in Logroño, where 300 council workers walked out and demonstrated, and in Galicia where hundreds of public sector workers demonstrated in all the major cities.

These protests are just an indication of the general mood of anger at this new austerity package, which is not only widely opposed but also considered as useless by the majority of the population. In an unprecedented move, the King will attend the Council of Ministers meeting this weekend, throwing his weight (which is not much after the latest corruption scandals affecting the Royal family) behind the government. Socialist Party leader Rubalcaba, while criticising the form of the measures adopted, offered the PP a grand "national pact" to face the crisis.

It was left to United Left to express opposition to these measures. In his intervention, Cayo Lara said that if Rajoy was to call on the King for support for his measures, United Left would call on the citizens to oppose them. This is correct. What is required now is a clear plan of struggle which can give the accumulated anger a channel of expression.