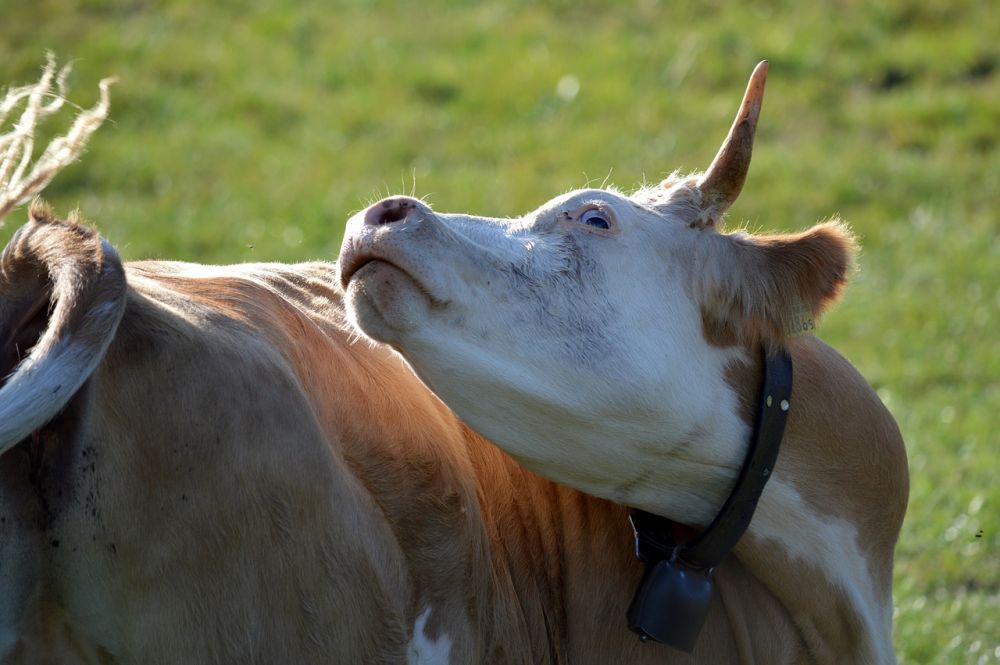 On December 23, 2003 the US government officially acknowledged the outbreak of BSE (bovine spongiform encephalopathy) in a herd of cattle in the state of Washington. This is officially the first case of mad cow in the US, but is in reality the second case of an outbreak in the integrated Canadian and US cattle industry. The first case came in May 2003 when BSE was found to be present in a herd of cattle in Alberta, Canada. It is interesting to note that the second case of mad cow was discovered in a herd in Washington, but the animal in which it was found was also from Alberta. The crisis of BSE, and the way in which the Canadian and US governments are handling the situation is setting an extremely dangerous precedent. The fact that there have been two cases of the disease in just over eight months is bad enough, but the real situation - and danger - to food production is even worse.

The farming and cattle crisis is at root a reflection of the crisis of capitalism worldwide and a result of "globalization". The problem, in North America and around the world, is that food is not produced on the basis of need and safety or for the greater social good. It is produced to make a profit. The reason the food industry has poisoned us so many times before – in Europe with its mad cow epidemics in the late 1990's and in Japan just a few years ago – has always been for money.

The fundamental problem in all of this is the capitalist mode of production in the food industry. Large corporate farms, which could actually provide a basis for large scale, safe food production, and which could also help to solve the problem of hunger the world over, continually cut costs and safety measures in order to increase profit.

In order to increase the amount of milk from cattle, protein had to be added to their diets. To do this cattle, sheep, pigs and chickens were turned into cannibals by feeding them the remains of processed cattle and sheep and by introducing antibiotics and hormones into their food supply. This has lead directly to the development of mad cow and its entrance into the food chain, causing a horrifying death among humans and animals alike. Besides this, it is much cheaper to feed animals the remains of already processed animals than it is to buy them hay or pasture. Once again this is a problem of money. Rather than disposing of the carcasses in an efficient and environmentally friendly manner, it is cheaper also to turn the carcasses into feed for other animals. This was largely a move by large corporate farms to keep costs down. The problem of money is basically the root cause of all food production problems and disease on farms in North America and around the world.

Another problem is that the animals and meat must be transported over long distances – causing great stress on the animals and lowering the quality of meat. Transported meat must be cured and is full of chemicals and other products to keep it from spoiling. This can be clearly seen in the first case of mad cow in Alberta. Parts of the herd to which the cow belonged had been shipped all across North America – to Texas and to Mexico. The carcass of the cow had been shipped to Vancouver, where it was turned into feed for chickens. Some of these chickens from Vancouver are in turn shipped to Alberta to be used as feed for cattle and pigs. The cow in Washington with BSE itself had come from Alberta, and meat from the infected cow had been shipped to seven US states as well as Guam. Compound this with the appalling conditions in the huge slaughter and rendering plants and we have our crisis.

Although Canada and the US have fully integrated beef industries, there are some internal contradictions as well. The US response of a border closure after Canada's outbreak has more to do with protectionism than with safety and concern. Even after the US outbreak, US officials were claiming that it was not an outbreak in the US, but rather in Canada because the cow had come from Alberta. The only problem with this argument is that the US has banned live cattle imports from Canada since May 2003. This means it must have been shipped some time ago, long before the crisis occurred, and seeing as the two markets are integrated, it doesn't really matter where the cow came from. In many ways, as many farmers in both the US and Canada have realized, the case of BSE in Alberta was not the reason for the border closure, but only the excuse they were waiting for. Before the outbreak, Canada exported 80% of its beef and nearly 100% of its live cattle to the US. As in the case of softwood lumber, cheap Canadian beef was hurting the American cattle industry.

One would think that after the first case of BSE in Canada, that the US and Canadian governments would change safety regulations and look at solving some of the problems in the cattle industry (or perhaps they could have changed policies after Britain's outbreak 10 years ago). However, both governments have been reluctant to change policies claiming that the two industries will no longer be harmonized. The real reason is the strength of the cattle industry lobby groups. These lobby groups in the US have given $22 million dollars to political parties since 1990, mainly to the Republicans, in order to keep safety and inspection measures in the industry to a minimum.

One of the main issues is feed – the use of other animals and marrow as a source of feed for animals must be banned, something the Canadian and US governments are afraid to do, because of this huge lobby on the part of the cattle industry which counters with arguments of money (once again) – saying that it would be too expensive to feed animals with other sources of food (such as pasture land and hay).

The other main issue is safety and inspection. The US agriculture department spent $6.6 million on BSE and scrapie research last year. The cattle industry however, spent $50 million on promotion. The facts and figures are appalling. The only conclusion one can draw is that the present crisis can only grow and get worse, and the danger to humans, already extremely high, will only climb higher. A senior safety source in the US agricultural department told the Guardian (January 12, 2004): "Among ourselves, we think our inspection system is the lowest in the world." He also claimed that testing for BSE is rare and haphazard, and carried out by people with minimal training and knowledge of the disorder. The US agricultural secretary, Anne Veneman, banned the killing of ‘downer' cattle (cows that are too sick to physically walk into the slaughter house) and has claimed that the US will double testing for BSE. The same senior safety source has claimed that little, if nothing has actually been done. He also claimed that the most shocking thing about the outbreak of BSE was that it was actually made public!

To understand the scope of the safety and inspection failure in the North American cattle industry one must look at some key figures. In Europe one in four animals is tested, and Japan tests every animal. The US averages one test out of every 7,000 animals – and this would be worse except for a moderate increase in inspection over the past two years. Even if the US decides to double the number of cattle tested, it will still be only one cow out of every 3,500! Another shocking figure shows that 200,000 downer cows were killed for human consumption last year in the US. Of all downer cows in the US, some 70-80%, the majority of these with central nervous system diseases, will pass through inspection, mainly because veterinarians are not trained how to recognize the disease. If these figures look bad, after the outbreak in Canada, the US government criticized the Canadian inspection system for being insufficient. The cow there had actually been slaughtered in January 2003, and the results of the test only arrived in early May of the same year.

These figures point to a disaster waiting to happen in North America. But the danger is not only one of safety. There could also be serious economic dangers. By August 2003, a cow that would normally sell for $1,300 in Canada was selling for $15. There is a widespread economic crisis developing on the Canadian prairies as the slowdown in cattle production is seeping into all areas of rural life. Feedlots, fuel companies, truckers, farm equipment retailers, lumberyards, buffalo, elk and deer breeders, sheep producers, rendering plants, pet food producers, and grain farmers have all been seriously affected. A recent survey reports that 8 out of 10 agricultural businesses have been affected, with nearly all of them reporting the same thing – decreased sales, cancelled orders, inability to export, increased costs and layoffs. Small towns are in a serious cash crunch as well. Here everything from car dealers to clothing shops to furniture stores are reporting a drop in sales from 20%-40%. On top of this, about 10% of many county taxes, over $1 million dollars in some counties, is yet to be paid from last year as a result of the severe drought. The point is that rural workers and farmers don't have the money to buy things anymore, and a severe drop in consumer spending like we have seen all across the prairies will in turn cause more economic troubles.

The danger is also high for the US economy. 43 countries have banned US beef imports. This could spell massive economic trouble as the US cattle industry supplies 25% of the world's beef. Add this to the present economic troubles in the US and the cattle crisis could be the catalyst that pushes the economy over the edge.

The solution to the problem lies in the nationalization under workers' control of food production in North America and worldwide. Many of us have either read or heard about the appalling conditions of work in many of the meat packing and rendering plants in the US and Canada. Most of these plants rely heavily on cheap, poorly trained immigrant labour, where working conditions look more like they did about 100 years ago. Workers are made to work long hours in unsafe and unsanitary conditions. These conditions in turn raise many questions about the safety of food production in these plants.

It is clear that we must nationalize the agro-chemical companies, meat production centres, and supermarkets that are destroying the lives of farmers and workers. As long as food production remains under the thumb of capitalism and the market our food quality will get worse and worse to the extent that we will only see more BSE and related crises. We must initiate a voluntary, socialized plan of production for farming and cattle/meat production that could protect farmers' jobs and security as well as securing the safety of our food production and guaranteeing safe, healthy food for the worlds' poor. All types of farms, whether they are corporate or the small, family farm, can only be concerned with the bottom line – profit. They don't care about safety or sanitation, or the effects of all the chemicals and genetic engineering that have entered the food chain. The workers and farmers themselves must monitor the safety and sanitation of food production, as it is they that must eat the food. Food must be produced for greater social need and good rather than for profit. This will be the only way to move out of the present food crisis worldwide.