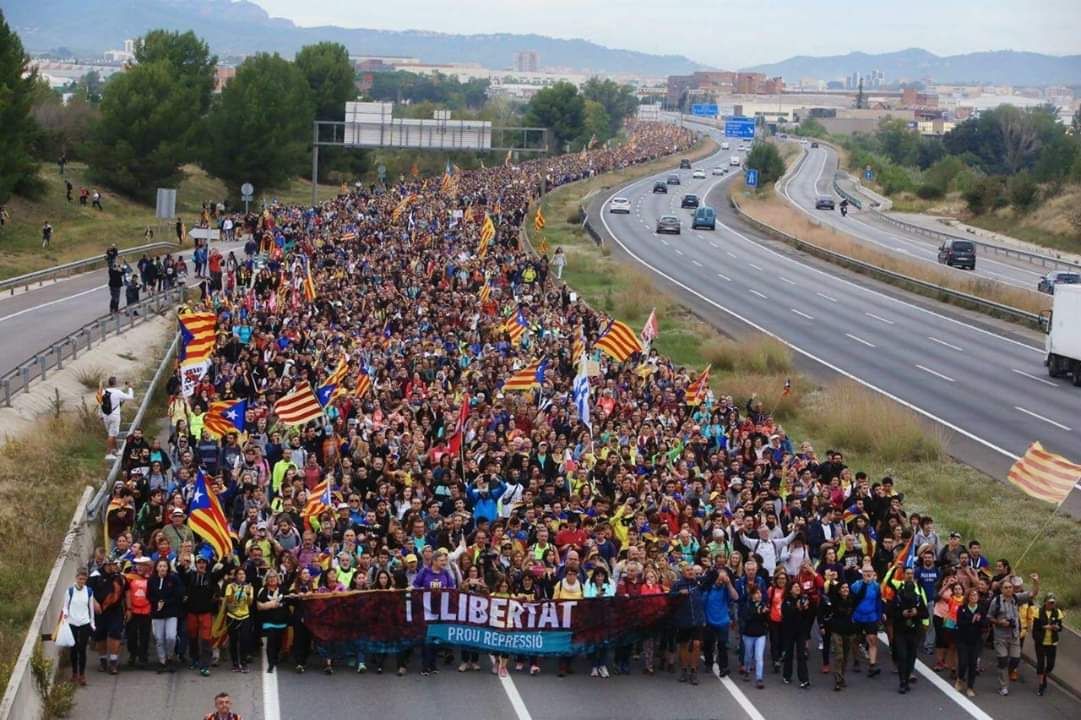 This comes after four very intense days of struggle, where hundreds of thousands of people, particularly youth, have shown enormous courage and determination, despite the brutal repression they have been subjected to by the local police forces, Mossos d'Esquadra, and the National Police.

Who creates the violence?

The media have made a lot of fuss about "violence". But regardless of the existence of police infiltrators amongst the protesters, it has been the brutal and violent repression of initially peaceful demonstrations, at the initiative of the police forces, that has unleashed the outrage of thousands of young people, who had no choice but to defend themselves. Countless people have been beaten, several were run over by police vehicles, two protesters have lost an eye, one has lost a testicle, another remains in the ICU with head trauma, among others who are seriously injured. The apparatus of the Spanish State needed this "violence", along with the help of the media of the regime, to try to discredit the movement and quell the sympathies aroused in the rest of the country by the struggle unleashed in Catalonia. It also wants to introduce division in the Catalan working class itself in order to prevent it from making a powerful response on 18 October.

A democratic struggle that involves the entire Spanish state

Despite everything, displays of solidarity have developed throughout the country, with protests and demonstrations in Madrid, Bilbao, Vitoria, Valencia, Mallorca, Alicante, Seville, Granada, Galicia, Cáceres, among other cities. More are scheduled this weekend in Malaga, Cádiz, Donostia, Zaragoza, Segovia, etc.

The struggle of Catalonia is not for independence, but against the subjugation of the democratic, political and social rights of the population by an unelected minority. Who makes up this minority? The big businessmen and bankers, judges, high state officials, police and military commanders, and a monarchy installed by Franco, who decide what we can vote on, what we can think and what decisions we can make, in order to ensure that their interests and privileges are not threatened. Their political horse grooms on the right, and also the leadership of the PSOE, simply take care of their masters' stables.

The right of self-determination for Catalonia is prohibited - just as a referendum on the monarchy is prohibited, just as the labour reform of the PP and its gag law are declared untouchable, and just how it is prohibited to investigate and prosecute the emeritus King, despite sufficient evidence of his involvement in collecting financial kickbacks and committing tax evasion by stashing his funds abroad. Under a Sánchez or Rajoy government, all this continues.

Therefore, what happens in Catalonia affects all of us. With the trial of Procés as precedent, any mass demonstration for our rights that hinders the repressive work of judges and police officers can be punished as “sedition”. The organisers of any protest could be condemned up to 12 years in prison, for stopping an eviction, preventing the beating of protesters by the police, ignoring a judicial or police request to evict a company threatened with closure that is occupied by its workers, or any other mass action that the police consider a hindrance.

Trial of Procés: farce and infamy

The Procés case clearly shows the authoritarian character of the 1978 regime. The accusation of “rebellion” (in which not even the accusers themselves believed and that in the end fell) served to “legally” deprive those accused of their democratic and “constitutional” rights (not being able to hold public office, a two-year provisional prison sentence, etc.) and thus remove them politically from the struggle as rallying points for the independence movement. With the charge of "sedition", this could not have been accomplished.

Now that rebellion has been ruled out, who can give them back the "constitutional" rights they were deprived of? Who can restore two years of their lives that they spent in jail?

Of course, the sedition charge is also not believed by the court, which declares in its ruling that there was never an attempt on the part of the Generalitat to break institutionally with the Spanish state, but only to force a negotiation.

The only facts that justify the crime of "sedition" in the sentence are, scandalously, the popular protests and mobilisations of 20 September and 1 October 2017 in Barcelona. 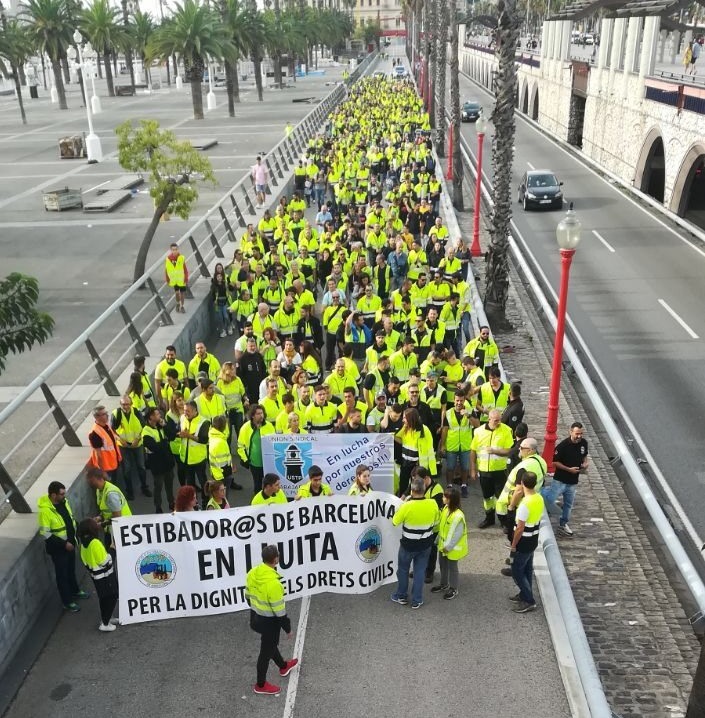 Therefore, the whole trial of Procés, its preliminary investigation, as well as the sentences, are corrupt from beginning to end. They are a fraud and a farce, and therefore they are, morally and politically, a manipulation. Not to mention its consequences for our democratic rights.

Not recognising and challenging this disgraceful trial is therefore a basic democratic principle that goes beyond the independence issue and the conflict in Catalonia.

The right to self-determination

As we have stated countless times, the unity of the people cannot be imposed, it must be established on a voluntary basis and on an equal footing, without perks of one over the other, and decided in a democratic referendum. The Spanish state apparatus will never accept that the Catalan people can freely decide their destiny. In Spain, the right to self-determination - like the struggle for a democratic republic - is a revolutionary task, which implies challenging a state apparatus and the capitalist system upon which it is maintained.

However, if the struggle of Catalonia is to win, it must do so by gaining the majority support of the Catalan working class, with methods of mass struggle and combining the demand for the right of self-determination with a socialist and internationalist class discourse, which appeals to the solidarity of the working class outside of Catalonia.

For our part, in the rest of the country, we must support the struggle in Catalonia with all our strength, because their defeat will be our defeat. It is no accident that the fangs of reaction seemed to shine more brightly after the defeat of Catalan Movement in October 2017. The development of Vox is an ugly product of that temporary period of semi-reaction.

The unfortunate role of the leaders of Unidas Podemos

In this regard, the position taken by the leaders of Unidas Podemos is unfortunate. They have shown their disagreement with the Procés sentence, but they have called to comply with it. Rather than use this statement to discredit the state apparatus and the judicial system, they bow their heads impotently, begging for an impossible "dialogue". This position, far from shedding light and clarity on what is happening, reduces the level of consciousness of the masses over which they have authority, and allows anti-Catalan and anti-democratic reactionary ideas to spread among the rest of the population.

Absent from the mobilisations occurring everywhere, when they should be at the head of them to enhance their size, Unidas Podemos are only worried about losing votes in the 10 November elections if they show a clear and courageous stance towards reject the judgement of the Supreme Court. But it is cowardice and confusion that creates distrust. Clarity and firmness of conviction is what wins people's attention and popular support.

Alberto Garzón, in particular, has had a scandalous stance, associating the “violent independence workers” with the right: “the best allies of the violent independence activists these days are Pablo Casado, Albert Rivera and Santiago Abascal. They need each other to justify their crazy speeches, their warmongering verbiages, their ultra-nationalist stories and their inert practices.” Garzón has never understood the Catalan national question, nor the democratic right of self-determination. His "equidistance" between the attacked and the aggressor really puts him next to the latter. His allies in Catalonia, Ada Colau and Jessica Albiach, are faring no better. With a cretinism worthy of a zealous convert, these “ex-activists” shamefully reproach Quim Torra for acting as an “activist” for encouraging popular mobilisations (although he justifies it behind the repression of the Mossos), when it is they who should be at the forefront of the struggle.

The fight for the Catalan Republic has all our support. A successful struggle for this objective would be the spark that would initiate a joint struggle throughout the country for a republic and the overthrow of the 1978 Regime. If the working class, both in Catalonia and in the rest of the country, were at the forefront of the struggle, the fight for the republics could quickly expand its objectives towards socialism. A voluntary federation of Iberian socialist republics could be established under these conditions, in order to extend the struggle for socialism on the other side of the Pyrenees and beyond.

That is why, on this historic day, we proclaim: