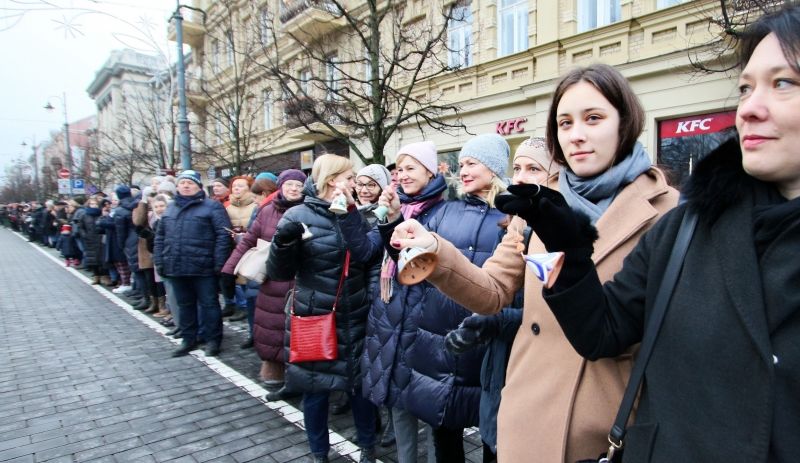 Lithuania is being shaken by an unprecedented teachers strike, which has now entered its fourth week and is causing severe anxiety, distress and panic among the ruling class and its political representatives. Already, Prime Minister Saulius Skvernelis has been forced to sack not only the hated Education Minister, Petrauskienė, but also two other Ministers: for Culture, and the Environment.

The lingering mess this right-wing government finds itself in has been matched by the increased militancy of the teachers’ movement. Since the strike began, it has extended from 40 to over 100 schools and adopted militant tactics Lithuania hasn’t seen for decades. Importantly, it has been greeted with warm and enthusiastic sympathy by the broader mass of the population. If it continues, it could even lead to the fall of the current government.

How and why did this happen? The teachers’ demands revolve mainly around new so-called “reforms”, which represent a serious attack on the working conditions of teachers across Lithuania. The government proposes introducing a new model based on “tenure”, through which the teachers would be forced to record every little task by the minute in order to earn their wages. Concretely, this means that the teachers would be forced to work more for less. The government is running a tight deficit, and its plan was to use this so-called “reform” to mercilessly make the working class pay for the crisis of capitalism. Andrius Navickas, chairman of the Lithuanian Education Employees Trade Union (LŠDPS) states:

“What’s been introduced is not a tenure pay system, and teachers’ hourly pay has been replaced with minute pay as school principals and teachers are now forced to meticulously evaluate every small job of theirs and also plan them for the whole upcoming year, so they are now already calculating minutes, not only hours.”

In the face of this, the movement began to snowball, picking up dramatically in size and seriousness. The strike has become a lightning rod for all grievances, arising from poor working conditions, such as the increasing pressure of workloads or oversized classrooms. From these, more demands emerged, with the flagship demand of a 20 percent pay rise before January 2019. These have been taken up by the trade union leaders, who so far have stated that strikes will continue until all demands are met.

Yet these have mostly fallen on deaf ears on the right wing of the Seimas (the Lithuanian parliament). Despite the wishes of trade union leaders, the government has refused to hold any negotiations, point-blank. The state budget passed for 2019 has increased its spending on armed defence, whilst not a penny has been conceded to the striking teachers. The government of Skvernelis and his stooges was elected in 2016 on a wave of promises for Lithuania’s most underprivileged layers. However, these characters quickly began to show their true colours, displaying nothing but contempt for the movement. To make things worse for themselves, they have chosen to fight the Lithuanian workers openly and directly: a potentially suicidal move. According to the premier (taking a cue from American politics) it is the Kremlin that is to blame for the “processes going on in the country”, which apparently has the aim of dethroning his right-wing Farmer-Green (LVŽS) government.

The government seems incapable of coming to terms with the idea that it might have started becoming very unpopular. It can’t, or doesn’t want to comprehend, that it is not up against the Kremlin or its agents, but ordinary workers who are fed up with their living and working conditions. This type of delusion is always characteristic of a government whose days are numbered.

Following a mass protest that took place in Vilnius on Sunday, with thousands turning out, Skvernelis has announced that he will go even further and use the State Security Department (VSD) to intervene in the situation, under the pretext of fighting against this mystical influence of Putin, which is nothing more than a slander used by Skvernelis against the teachers’ movement. 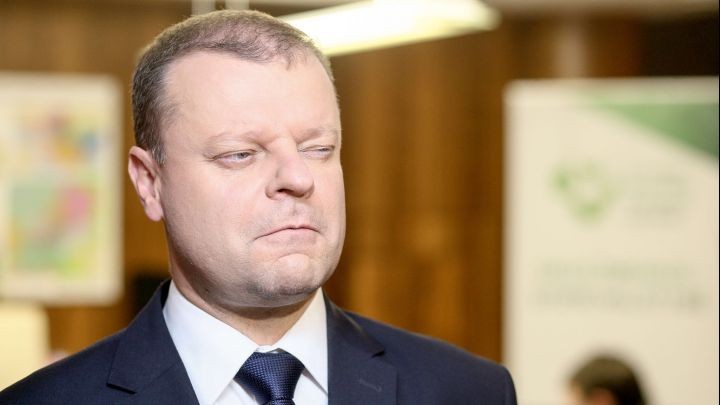 The government of Prime Minister Saulius Skvernelis seems incapable of coming to terms with the idea that it might be losing popularity / Image: public domain

The leader of the LVŽS, Karbauskis had defended this decision saying, “I’ve read the document, which is classified and shows that Skvernelis had reasonable ground to turn to the services… This is a threat to national security (and) those posing that threat are clearly identified. I think our services must react very responsibly.”

Such threats in the current situation are likely just a dramatic addition to the slanders, to try and prove how serious they are. Although this should make us no less vigilant, considering they could use the VDS in more concealed ways to discredit or combat the workers’ movement. At the same time, it is unlikely that at this stage Skvernelis will use the VDS or state institutions in a direct or brutal manner. In the recent period, around 30 teachers have decided to begin the occupation of the Lithuanian Ministry of Education and Science building, causing major interruptions to its work. The government has responded bullishly to this development, paying little heed to the danger it poses. The chairman of the parliamentary Committee on National Security and Defence, Vytuatuas Bakas, has openly proclaimed on Facebook:

“I definitely do not approve of using force and calling protesting people terrorists, but I believe it’s also unprofessional to hide one’s head in the sand when one needs to act. The police should at least provide an assessment of the situation and to remind and explain to the people violating the law that they need to comply.”

Fundamentally, this reflects a class balance of forces that is quantitatively and qualitatively in favour of the teachers’ movement and the working class. After all, the working class, which makes up the majority of society in Lithuania, knows only too well the potential brutality that the state and its armed bodies of men are capable of, following the experience of Stalinism. Seeing once more the savagery of the state, that they thought was consigned to history, the government would have to fight not just the teachers, but the whole Lithuanian working class. Faced with this, they would not last very long.

But by resorting to these threats, they are still playing with fire. Even bourgeois commentators are tearing their hair out at the reckless handling of the situation by the Skvernelis government. Meanwhile, an open split in the ruling class is beginning to emerge, as President Grybauskaitė has stated that the situation is “spiralling out of control”, and that the reforms are being carried out in an “arrogant manner”. Oppositionist Dubliauskas has stated:

“He (Skvernelis) acts more and more often as a disgruntled, cantankerous policeman of the old days, not as a prime minister. If we see more strikes there and if he reacts the way he reacted to the teachers’ strikes, i.e. ignored them throughout, his day as the cabinet leader could be numbered.”

Such comments make it clear that the government finds itself in a chaotic crisis. It cannot be stressed enough, however, that bourgeois politicians and commentators who are critical of Skvernelis and his government represent the exact same class interests. It is not a matter of having a more “competent” or “negotiable” leader. Capitalism cannot be saved from its own demise. Angela Merkel’s nearly two decades of experience have not saved her from the crisis escalating in Germany. Neither was the new “centrist saviour” Macron able to prevent the mass movement of the Yellow Vests in France.

Indeed, these strikes are symptomatic of a much deeper malaise within Lithuanian society, the same malaise that is affecting the entire world, which flows from the crisis of the entire capitalist system. Opposition politicians may try to play the game of gaining some political capital out of this, which is what the Christian Democrats, the largest opposition party, have been trying to do. But as the class struggle sharpens, they will be on the same side of the barricades as Skvernelis and the rest of the ruling class. The teachers’ movement has been powerful because it is using proletarian methods of struggle. The Christian Democrats view such methods with no less contempt than do Skvernelis and his cronies.

The movement is currently enjoying a high momentum. Pictures of the ministry building occupation have been shared thousands of times, in a country with a population of only three million. The occupation has attracted daily solidarity demonstrations, with hundreds attending in sub-zero temperatures, expressing an enormous tenacity and willingness to fight. Sunday’s demonstration of more than 6,000 represents a high point of the movement so far.

Although the parliament overwhelmingly passed the president’s amendment on Thursday in an attempt to conciliate the movement, it is too little and too late. The amendments would only come into force in September 2019, and in any case they only simplify the already existing reform, barely relinquishing the squeeze that is being imposed on the teachers in the first place. The LŠDPS union leader Navickas has stated that this amendment is “not a sufficient reason for the ongoing strike to be stopped”.

The strikes will therefore continue until “at least Christmas”. Ultimately, they represent the deep frustrations that for years have been developing beneath the surface and which are finally finding a point of expression. The same moods that have caused immense political earthquakes in France, Britain, Spain or Italy are bubbling to the surface in Lithuania and throughout the rest of Eastern Europe. Ultimately, they are an expression of the inability of capitalism to solve the basic problems of working people. The trade union leaders should take into account that the struggle of the teachers can and should be the struggle of the entire working class of Lithuania. Unlike what some trade union leaders have said, class struggle cannot be divorced from politics. It is always political, for it represents a clash between two mutually incompatible sets of interests: those of the workers, and those of the capitalists. A compromise with the employers, or withdrawing from class politics is in itself, a political stance, one that is useful for the capitalists, not for the workers. On the other hand, a correct programme in struggle could swing the balance to victory.

Fundamentally, winning the demands of the teachers’ union can only be possible through the maximum possible mobilisation of the entire working class of Lithuania under a bold class programme. Leading this struggle to its successful conclusion means we have to tackle the problem at its roots: capitalism needs to be consigned to the dustbin of history; the working class in Lithuania and internationally needs to take power and begin to build a new society in which wealth and production are democratically allocated and planned.

The International Marxist Tendency offers its best wishes and solidarity to the struggle of the Lithuanian teachers. Your fight is our fight. Workers of the world, unite!