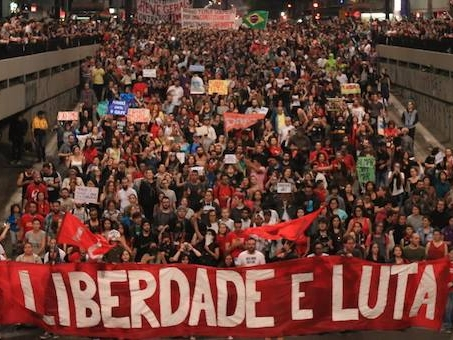 “Freedom is the goal, and struggle is the method”, says Lucy Dias, a university student and revolutionary activist from the organisation Liberdade e Luta (Freedom and Struggle), “but there can’t be real freedom under capitalism”. We’re sitting, along with 1500 other young socialists and political activists, in a vast warehouse in the old port district of Rio de Janeiro, Brazil. Defiant slogans decorate the walls and the building is awash with militant singing and lively drum beats. This is an international camp for young people who want to fight for their future, organised by Juntos!, a broad youth organisation. Here, there’s no doubt that spirit of freedom and struggle is universal.

Liberdade e Luta was founded in January 2016 at a meeting of students and young workers at the occupied Flasko factory just outside Sao Paulo. Since then there have been huge demonstrations against rampant corruption in the Brazilian political system; President Dilma Rousseff has been impeached and unceremoniously removed from office; and there’s an ongoing struggle against the vicious right-wing government of Michel Temer.

Over the weekend of 15-16 April 2017, I met with activists from Liberdade e Luta to discuss how socialist revolutionaries have been intervening in these events and what their plans are for the future.

“There are a lot of attacks on young people today” explains Evandro Colzani, a Liberdade e Luta activist from Sao Paulo, “and everyone wants to get involved in the fightback”. He gives me the example of Joinville, a city in the south of Brazil, where Liberdade e Luta has successfully launched and won a mass campaign, based on the methods of class struggle, against a gagging law that seeks to ban politics from schools.

At present, the education system is under assault by state and federal government, and this has led to a tidal wave of school occupations in the recent period. The gagging law is an attempt to criminalise, intimidate and crush this opposition to the government. The arguments, ideas and slogans coined by Liberdade e Luta in the campaign against the law have spread all over the country as students and teachers fight against this reactionary policy.

The success in Joinville has been compounded by a recent ruling from the Supreme Court that the gagging law is actually illegal in its current form. But this is far from the end of the struggle. The law is already being enforced in some schools, and in some places teachers have been imprisoned for expressing political opinions. It will be the struggle of the working class and the youth, not the bourgeois courts, which really defeats the government on this question.

Evandro tells me that as the congress of the national students’ union approaches, Liberdade e Luta will be stepping up its campaigning, on the gagging law, on university fees, and on school reform. The students’ union congress will be a pitched battle between the conservative leadership of the union and a constellation of Left groups, including Liberdade e Luta, pressing for militant action and radical policies.

Developing class struggle in Brazil over the question of pension reform, including a general strike planned for 28 April, is sure to give a powerful impetus to the left-wing in this battle.

“The mood among people now, especially young people, is for a generalised struggle against the government”, explains Johannes Halter from Liberdade e Luta in Sao Paulo. “There was a big movement for free transport and other specific demands around the 2013 demonstrations, and that has developed now into a fight against the whole regime”.

This general mood is summed up by the slogan ‘Fora Temer!’ (‘Temer out!’) which is now ubiquitous on the Brazilian Left. Liberdade e Luta argue that Temer is a creature of the capitalist system. To rid ourselves of the politics of Temer, we have to rid ourselves of capitalism.

Felipe Araujo, a young teacher and Liberdade e Luta activist, tells me that “it’s not just about being anti-capitalist. Everyone knows what they’re against but we also have to explain what we are fighting for. We have to talk about socialism.”

This is what Liberdade e Luta activists have been putting forward in meetings at schools and universities all over Brazil. They’ve been linking the fight against Temer, against the criminalisation of protest, against racism and sexism, to the fight for a world which is no longer divided by class and which no longer strains under the burden of oppression. 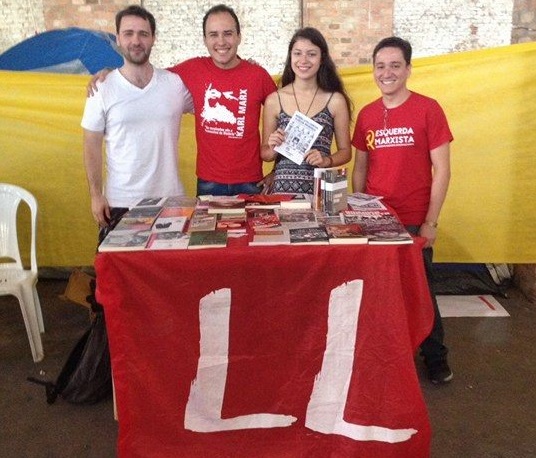 This, they explain, can only be achieved when the means of production - the basis for our ability to eat, work and survive - is democratically controlled by those who actually do the producing, not the distant and parasitic 1%. This is the road to equality and freedom for all.

The local school and university meetings of Liberdade e Luta also link the struggles of today with the lessons of the past. “We’ve had a lot of meetings on historical subjects, like the Russian Revolution”, says Evandro Colzani.

Lucy Dias tells me that she’s keen to get some reading groups going on classic Marxist texts, such as the Communist Manifesto. She thinks that, since the events of 2013, young people are looking for theories and ideas to explain the crisis in Brazil - something that Marxism can provide.

Lenin said that “without revolutionary theory, there can be no revolutionary movement”, and there’s no better time to be studying the classic texts than on the centenary of the Russian Revolution.

Liberdade e Luta is a growing force on the Brazilian Left, and there is lots more work to do. The activists I spoke to tell me that they’ll be out in force on the upcoming strikes and demonstrations against the government. With their campaigns, their prolific pamphlet production, and their local meetings, they’re confident that they can put revolutionary socialism at the heart of the struggle against the Temer government and everything it represents. To me, that confidence seems entirely justified.