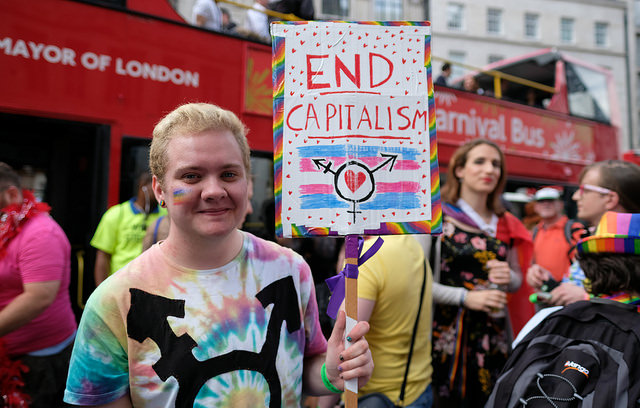 The struggle against sexual discrimination is linked to the struggle against class society in general for several reasons. The first is that only the abolition of class society can create the material economic basis and cultural drive sufficient to dismantle the model of the monogamous family as the only basic unit of society. By socially carrying out all the tasks that are today assigned to the sphere of the family, and mostly to women (cooking, cleaning, raising children), and by allowing the free development of individuals with access to the best material and cultural resources society can provide, it will be possible to facilitate a process by which interpersonal and family bonds are gradually freed from material necessity and correspond solely to romantic and sexual desires, thereby dissolving the oppressive norms and discriminations that exist at present.

The second reason is that the vast majority of LGBT people are workers, youth, temporary workers, unemployed, who experience a double oppression in regard to both their class, in the workplace and living (or surviving) conditions, and their identity or sexual orientation. Joining the struggles against these two forms of oppression is therefore the most natural thing, especially when we consider that the enemy is the same. Moreover, it should not be forgotten that homophobic prejudices are also fostered to divide workers – for example, to make heterosexual workers believe that, while they may be oppressed, they are still superior to the gay person (how satisfying!), in the same way that racist prejudices are nurtured. The role played by the right wing in this process is self-evident.

Whoever says that the two fronts of struggle must be separated is playing into the enemy's hands. And often, in the LGBT movement, those people promoting this stance are wealthy individuals who do not experience the material problems faced by LGBT workers and youth.

– From LGBT: Liberation and Revolution