This December marks the one year anniversary of the occupation of Republic Windows and Doors, a struggle that captured the attention of working people across the country and the world, as it symbolized the hardships faced by millions due to the economic crisis and a willingness to fight back. 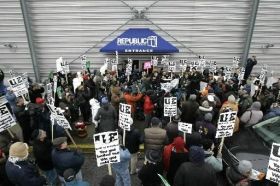 However, even as the economy improves on paper, this “improvement” is not being felt by most workers and the growing ranks of the unemployed. We should, therefore, use this opportunity to look at the situation of the former Republic workers today and to try to draw the lessons from this occupation for future struggles that are sure to arise in the coming period.

Republic Windows and Doors was a Chicago-based company that produced vinyl replacement windows. In mid-2008, the company began removing machinery from the plant, which drew the attention of the workers, represented by United Electrical, Radio, and Machine Workers of America (UE) Local 1110. When confronted, the bosses claimed that they were simply making room for modern replacements. The workers weren’t buying it and began following the semi-trucks that were shipping the machinery out of Chicago. They found that the trucks were going to a newer, non-union plant in Red Oak, IA. As will be discussed later, this independent action of the workers would prove crucial in the case against Richard Gillman, former CEO of Republic.

On December 3rd, seemingly out of nowhere to the outside observer, but not at all unexpected to the workers, Republic announced that they would be halting operations immediately. What was unexpected was their revelation that they would not be paying the workers their severance pay or vacation benefits, which was in direct violation of the Worker Adjustment and Retraining Notification (WARN) Act, which requires at least 60 days notice for plant shutdown and 60 days of severance pay. The bosses claimed that they could not possibly come through on this demand, because Bank of America had recently cut off their line of credit.

Had the workers not acted at this point, the bosses most likely would have gotten away with this gross violation of the law, which shows the limitations of relying on the niceties of the bosses’ legal system. Instead, the workers chose to “violate” the law in their own way, and immediately occupied the plant, demanding their severance pay and pointing out that Bank of America had recently been bailed out and now the workers were getting sold out!

The decision to occupy the plant has been presented in the media as an entirely spontaneous action, which is not entirely true. As Kari Lydersen, author of a recent book on the occupation, Revolt on Goose Island: The Chicago Factory Takeover, and What it Says About the Economic Crisis, points out, the UE Local 1110 workers had expected that a plant closing was imminent for some time and had actually studied successful occupations of automotive plants in Canada in recent years. Also, workers and organizers from the plant had previously visited workers involved in the occupied factories movement in Venezuela. These tactics had all been discussed prior to the announcement of the closing, so that when the time came, the local leadership could propose a strategy for victory that was bold, militant, and tested through the collective experience of the international working class.

The tactic worked, and relatively quickly, on the 10th of December, Bank of America and JP Morgan-Chase agreed to pay the severance pay of the workers. We explained at the time that this was a partial victory, because while the demands for severance pay were met, the plant was still scheduled to be closed and the workers were still going to lose their jobs. 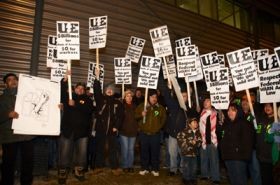 The plant was purchased in February of 2009 by Serious Materials for $1.45 million. The “socially-conscious” CEO of Serious, Kevin Surace, claimed his goal was to rehire all of the workers that had lost their jobs, but now, one year on, only 17 of the original 250 workers have been rehired. Serious Materials claims that this is due to their having received a far lower amount of the American Recovery and Reinvestment Act (ARRA) funds than they had expected. Whether this is true or not, it shows the degeneracy of the market and its inability to put people to work, as well as the limitations of relying upon “business angels” to come and rescue workers facing job losses.

While the winning of their severance pay was clearly a victory and a fighting example to the rest of the working class, at the same time, the demands of the UE workers lagged behind their tactics. While their tactics correctly showed a disregard for the farce of bourgeois legality, their demands remained within the framework of the very market that the existing legal system defends. That is, they assumed that the factory would simply have to be closed because Republic went bankrupt. However, as more workers face cuts in wages and benefits and factory closings in the coming years, not only must we be willing to fight, we must put forward demands that can ensure production continues and our jobs are not cut: nationalization under workers’ democratic control. Only in this way can we defend existing and create new jobs, improve our standard of living, and continue to produce the goods and services we all need.

And what became of the bosses at Republic? Charges have been filed against Richard Gillman, who along with two other former Republic executives, is charged with fraud and money laundering through shell corporations in an attempt to relocate Republic to a non-union factory in Red Oak, IA. He has been released on $5 million bail, which had been reduced from $10 million.

The Cook County prosecutors actually credit the workers of UE Local 1110 with creating the conditions that allowed for the collection of most of the evidence against Gillman and co. Not only did they follow the semi-trucks, but it was their occupation, i.e. a formal violation of the law, that prevented Gillman from destroying the remainder of the evidence, which was held in the offices at the plant. This included a PowerPoint presentation that detailed the bosses’ plans to move machinery to Iowa under the noses of their own board of directors.

This is all the more important, because not only did Gillman conspire to destroy the lives of 250 workers in Chicago, but less than two months after Gillman began operations in Red Oak, that plant, which had been operating since 1985, also closed, laying off 120 workers and devastating yet another community.

It was only the actions of the workers that provided even the possibility that Gillman will see his day in court, albeit in a justice system stacked in his favor. How many similar situations are there around the country? In the current economic situation, we must demand that all business open up their books. If the business is genuinely failing, prove it. The bosses must be held accountable! We should not have to pay for their crisis!

One thing is clear: the Republic Windows and Doors factory occupation marked a turning point in the struggle of the working class in the United States. It will serve as an inspiration for the struggles that lay ahead. Already, numerous articles and books have been written about the struggle.

The workers of UE 1110 are also featured in Michael Moore’s new film, Capitalism: A Love Story. No wonder! The tactics they used in their struggle are the basis for dealing with the real cause of the problems we face and outlined in the film: the capitalist system itself. These workers will also be featured in a new documentary titled Workers’ Republic, released by Insurgent Productions, and featuring the tag line “When the economy fell… they stood up.” The key, however, will be to synthesize and absorb the lessons from this struggle, not as an academic exercise, but in order to apply them in the future struggles of our class.