Morocco
Share
Tweet
Beginning on March 8, International Working Women’s Day, the “Rank and File” Tendency of the National Student Union in Morocco organised a week of activities around the question of the emancipation of women. We publish here a report of the week of action. Picture gallery available here. 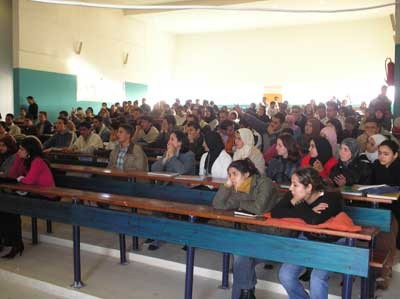 The students from TAWAJOH AL KAAIDI of the UNEM (the “Rank and File” Tendency of the national student union in Morocco) organised a week of political and cultural action at the University of Tetouan. The week of activities started on March 8, International Working Women’s Day. The students specifically insisted on the term “working women” because they have a class approach to the women’s question as opposed to the “gender” approach so common to NGO’s, the reformist lefts and the regime itself. This is particularly important, as the question of women is a tool used by the dictatorship to present itself as the “emancipator of Moroccan women”. By doing so the monarch is trying to gain some support in society for the continuation of the dictatorship. The same has been done in neighbouring Tunisia by the dictator Ben Ali who finds in this a justification for his iron rule.

The actions started with a large bookstall at the university with the works of Marx, Engels, Lenin, Trotsky, Ted Grant, Alan Woods and Pierre Broué. Banners were put up with slogans like “The ‘Rank and File’ tendency (TAWAJOH AL KAAIDI) of the UNEM organises International Working Women’s Day”. Other banners said “Workers of the World Unite”, “Under blood, Under fire, Palestine is for the revolutionaries!”, “No to the Education Charter”, “The ‘Rank and File’ tendency is the Workers’ tendency in the Moroccan student movement” and finally, “No emancipation of women without socialism, no socialism without the emancipation of women”. 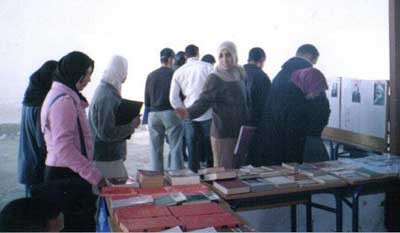 A public debate was organised for the same evening on the question of the emancipation of women from the point of view of Marxism. Students discussed the issue both from an international and national perspective and specifically from the point of view of the female students. Transitional demands were formulated for the abolition of domestic work by making it public and collective, the need for necessary medical infrastructure, and for free access to schools and universities for the children of the working class and the poor in general. They also discussed the need to get rid of the reactionary content of the schoolbooks and studies through the establishment of workers’ control of the education system.

The next day there was a public meeting where the question was deepened with a theoretical and historical discussion. They debated the origins of the oppression of women and the alternative - the situation of women internationally under capitalism. There was also a discussion on the experience of women in Russia and Venezuela and their role in the revolution. The role of the women martyrs (those who died at the hand of the repressive regime while struggling to overthrow it) was also remembered. Another important element of the discussion was that women were not discussed simply as victims, but as active fighters in the struggle to change their fate – as fighters for socialism. 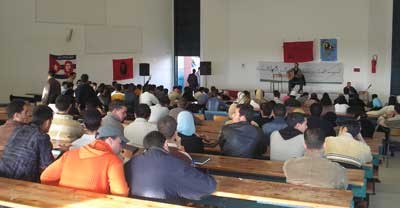 On the last day a cultural and political event was organised where hundreds of students came to listen to and sing the revolutionary poetry of Cheikh Iman, Marcel Khalife and to hear poems from students. For the first time ever in the Moroccan student movement they also sang “The Internationale” which has recently been translated into Arabic in Tunisia. At the end the following Manifesto was read:

Manifesto of the “Rank and File” tendency (TAWAJOH AL KAAIDI ) of the UNEM read out on the International Working Women’s Day.

Capitalism has given nothing to the working class (both women and men) except oppression and misery. Women workers are the most oppressed under the yoke of this system: the wages of women are lower than those of men, they have less opportunities for education and despite the fact that humanity is able to send men to the moon there are still poor women who die every minute in childbirth due to the lack of medical infrastructure. Ninety percent of the civilian victims of wars and other armed conflicts are women and their children! Hundreds of millions of women are condemned to domestic slavery in their households. The list of injuries is very long!

However, women are not, in spite of all this, simply exploited victims. They struggle every day under the worst conditions.

Women workers in Venezuela were the first to come out against the fascist coup financed by the United States in April 2002. Without fear for their lives they succeeded in defeating the plot against the Chavez government. Palestinian women wage a heroic fight against the Israeli occupation and against all forms of oppression. She is an activist, she is a martyr, the mother of martyrs, his spouse and his comrade!

This is also the case of the Iraqi and the Afghan women who have written glorious lines in history and who are struggling against the direct occupation of their countries and against obscurantist forces.

The oppressed Moroccan women have also struggled and sacrificed their lives against direct occupation.

History will not forget her.

The oppressed Moroccan women have struggled and continue to struggle against the dictatorial regime and have given many martyrs for emancipation: Saida Lemnechi, Zobida, Najia… the list is long.

The oppressed women of Morocco continue to struggle in the factories, on the farms and in the universities so that the wealth they produce will be the property of all!

It is not possible to end class society without a socialist revolution, without the unification of the struggle of women workers with the male workers directed against the common enemy of all the oppressed: the capitalist system.

Forward in the firm struggle against the origin of all oppression – capitalism!