On Tuesday 28 April – in what protestors are coining ‘the night of the molotov’ – working people streamed into the streets of Lebanon in an open show of force against the government. The masses are once more in the streets calling for a solution to the dire economic situation that the country faces.

This new wave of protests comes merely six months after the last mass movement that rocked the country. Previously, nearly 2 million protestors in a country of six million took to the streets demanding the fall of the government. This movement resulted in the collapse of the previous Harriri coalition government, which was replaced by a government of ‘technocrats’. As all technocratic governments, this one was part and parcel of the ruling class, just like the previous government. Thus, predictably, such a government has found no solutions for the working people of Lebanon.

Therefore, it is unsurprising to see the stark change in mood on the streets of Beirut. Whereas previously the revolution was marked by a spirit of optimism as the masses first began to find their revolutionary courage, the recent protests are marked by desperation and rage. Lebanese workers are facing horrifying conditions, with a collapsing currency, soaring prices and rising unemployment. Increasingly workers are unable to feed themselves. The people are fed up and frantic for some kind of solution to the present crisis. These protests also occur amidst the COVID-19 outbreak in Lebanon, where the workers have two options: starve at home or risk catching the virus. The masses have chosen a third option: fight.

What drove protestors into the streets before was the deteriorating economic conditions and worsening living standards that the masses had to endure, the result of decades of corrupt rule by the cabal of warlords who divided up the country between themselves after the civil war. Under the watch of these millionaires and billionaires in government, Lebanon’s debt continued to mount. Like a gambler addicted to the rush, the ruling class of Lebanon continued to accrue public debt at a rapid speed. Most of this money, intended for the building of the Lebanese economy, found its way into the pockets of the Lebanese elite instead. Unsurprisingly, the Lebanese government defaulted on this debt in March.

In Pictures: Hundreds of protesters gather in Tripoli's Al-Nour Square on Sunday, May 3, 2020.

These policies, pushed by a greedy billionaire class and the politicians that represent them, has resulted in the situation we see today. There has been a virtual collapse of the Lebanese pound. The Lira has lost a huge part of its value. While the official government exchange rate is one US dollar per 1,500 Lebanese lira, the real ‘black market’ exchange rate stands at 4,300 lira per dollar. This is leading to runaway inflation.There has been a massive increase in the price of basic goods. Sugar has gone up as much as 70 percent, vegetables have doubled in price, and most economists estimate the country may face 50 percent unemployment. In response, the banks have limited the amount of cash people can withdraw. This has led to routine lines at the banks on a daily basis, with most people being denied service.

COVID-19 only worsened the situation facing the country. With the virus tearing through the world, a lockdown was instituted across the country. This was a lockdown of starvation, with no support being given to the people by the government. The army patrolled the streets, ensuring no one broke the quarantine. The masses were slowly starving in their homes, while the newly minted Lebanese government bickered amongst itself. The Prime Minister blamed the Governor of the Central Bank, while the banks blamed the government. On 14 April, Social Affairs Minister Ramzi Moucharafieh admitted that 75 percent of Lebanese people would need financial assistance to survive. This situation has led to heart-wrenching scenarios, such as when a jobless construction worker tried to sell his kidney to pay rent.

The government is showing everyone exactly where their priorities are. Bickering and securing their own slice of the Lebanese economy, even as the entire house of cards comes tumbling down. In this situation, it is no wonder that the masses have resorted to throwing molotov cocktails through bank windows. Across the country, in Tripoli, Beirut, Nabatieh, the masses are showing their power and moving into the streets once again continuing the process of class struggle which began in October of 2019. Unlike before, however, the government has been quick to use force. Protestors have clashed with the army on multiple occasions, such as in Tripoli, where 26-year-old protestor Fawwaz Fouad Al-Seman was killed by security forces. These clashes are increasing in scope and number, expressing that protestors have run out of patience with the situation and the government.

New Diab government has no solutions

The new Lebanese government, led by Hassan Diab, has completely failed to fix any of the problems facing the country. This should shock no one, as it was never intended to. The government is backed and endorsed by Hezbollah, the Amal Movement, and the Free Patriotic Movement. These same parties and politicians were involved in the last government, which ran the country for over two years. This is not a government of change, but a government of the status quo that led Lebanon to the impasse it faces today.

A testament to this is the 2020 budget passed in January. Despite being drawn up and written by the Hariri government, the very same government that was forced to resign on the back of the spectacular movement we saw in October, no changes were made to the budget. This is an admission by the Diab government that no changes will be made to the situation. Instead, the government is turning its hopes to the IMF and other international loan packages. But accruing more debt will not solve anything.

Protestors recognise this, and have begun protesting the deal with the IMF as a dead end. “Going to the IMF is not the solution,” Al-Mughrabi, a protestor in Sidon stated. “We don’t need any more debt than we already have.” The emphasis of the protestors has instead been on radical changes. They feel, correctly, that the status quo cannot be overturned by simple reforms to the system. In any case, the IMF has already stated that any deal they reach with the government will require ‘structural reforms’; or in other words, austerity and attacks on living standards. Under capitalism, it is always the poor who pay when the rich drive society into crisis, and Lebanon is a prime example of this.

As we have stated before, the problems of Lebanon do not stem from the individual politicians in charge. In fact, it was the movement in October that demanded a government of technocrats. It imagined these technocrats as impartial judges that would be fair and at least follow the law. This is a utopian dream, for there are no fair and impartial technocrats. Many of the people in the newly minted Diab government are new faces and technocrats from behind the scenes of the state, whose main role is to protect the private property of the ruling class. This becomes clear when, after being placed under scrutiny, these people are revealed to have ties to the exact same criminals the movement just fought to remove. This is the case with all top officials of the state, who are the unelected representatives of the ruling class, making sure the state is run in its interests. 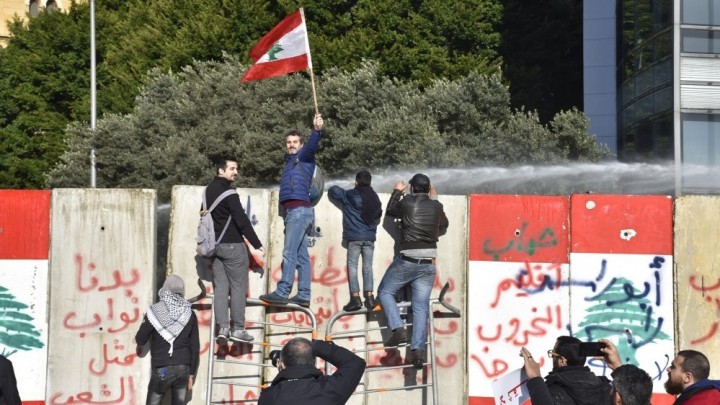 The masses can only trust their own forces. Once they are unleashed, no amount of repression will be able to resist the revolution / Image: fair use

The crisis in Lebanon is not due to which bureaucrat runs the system, but the system itself. For capitalism, the concern for the profits of the ruling class weighs more heavily than the needs of society. Represented by loyal servants such as Hassan Diab, corruption is woven into the very fabric of Lebanese capitalism. There is no electricity, no food, no sanitation, and no help for working people; not by an accidental fault in the system, but due to the system. In the present crisis, the ruling class and its lackeys in the state are not trying to maintain the livelihoods of the people, but to protect their own interests. This inevitably means unloading the cost of the crisis onto the working people. The movement cannot afford to trust any section of the ruling class. The running of the country cannot be left to technocrats or political fatcats. It must be the working masses of Lebanon that run Lebanon.

Thus far, it has been the poorest layers of Lebanese society and the youth at the forefront of the movement. The working class of Lebanon must be brought into the fold. Revolutionary committees should be set up in all workplaces, neighbourhoods and schools in order to bring in as wide a layer as possible. These must be connected on a local and national level to organise the struggle. As the struggle deepens, these democratic bodies could form the basis for running society under control of the working masses in the future.

No more trust can be placed in the half-measures of the politicians in power. All of them must be removed. The masses can only trust their own forces. But once these forces are unleashed, no amount of repression will be able to resist the Lebanese Revolution.