Details
In Defence of Marxism
21 February 2008

This year, for the first time one of Trotsky's key works, the Revolution Betrayed, was presented by the Frederick Engels Foundation at the Havana Book Fair, stimulating big interest. A special edition of a theoretical magazine on China, including the analysis of the International Marxist Tendency on this subject was also being sold. It is clear that a layer of the most conscious workers and youth in Cuba are looking far a Marxist alternative to the prospect of "market economics" being reintroduced to the island. 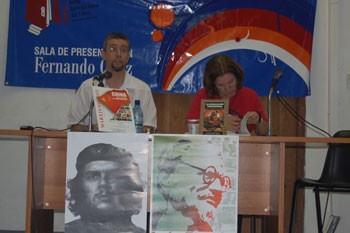 On Monday, February 18, more than one hundred people filled the Fernando Ortiz meeting room at the Havana Book Fair, to attend the launch of Leon Trotsky's Revolution Betrayed, the first time that a book by the Russian revolutionary has officially been presented in Cuba. The people were so keen that 15 minutes before the advertised time, all 60 seats in the room had already been taken. Those attending were revolutionary militants spanning three generations and from many Latin American countries and beyond. Among those present were veteran Cuban Trotskyist Idalberto Ferrera, and his son and also a revolutionary militant Juan Leon Ferrera, who participated in the revolutionary war and later worked with Che Guevara.

This is the fourth year that the Spanish Frederick Engels Foundation (FFE) is taking part in this impressive Book Fair which takes place in the Cabaña complex, the old Spanish colonial fortress where Che Guevara established his Comandancia (Command Post) after the victory of the revolution, nearly 50 years ago. This time we decided to present two works which in our opinion are crucial for the debates about socialism that are taking place throughout Latin America, and of course in Cuba itself. One is the already mentioned work by Leon Trotsky, and the other a special issue of the Marxismo Hoy theoretical magazine devoted to China, which includes a work on the revolutionary history of the country, Trotsky's introduction to Harold Isaacs book on China and a document by the International Marxist Tendency analysing the process of capitalist restoration in China. 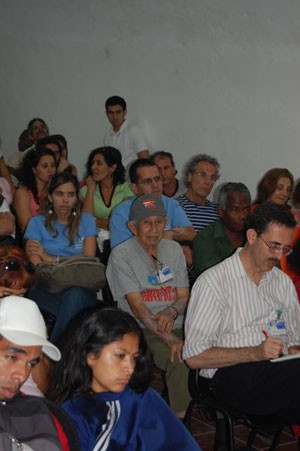 The meeting began with a speech by Jordi Martorell, spokesperson for the international Hands Off Venezuela campaign and a member of the Frederick Engels Foundation. He stressed how the presence of the FFE at the Book Fair was part of our internationalist and militant commitment to defend the Cuban Revolution.

Jordi explained the historical significance of the event. This was the first time a book by Trotsky was being launched at the Book Fair. Written in 1936, the book predicted and explained the process by which the Stalinist bureaucracy restored capitalism in the Soviet Union at the end of the 1980s. Jordi pointed out that the importance of the book lies in the scientific analysis of the collapse of the bureaucratic system, which was not at all the "failure of socialism", as bourgeois propagandists argued. In this book Trotsky describes the process of bureaucratic degeneration of the Russian Revolution, but also explains its material causes: the isolation of the revolution in a backward country.

One of the aspects that Trotsky deals with is the foreign policy adopted by the Stalinist bureaucracy, which abandoned proletarian internationalism for the conservative idea of "socialism in one country" and peaceful coexistence, which reflected the interests of the bureaucratic caste. Jordi pointed out how the Cuban revolution itself, many years later, clashed with this conception, and quoted from Che's speech in Algiers when he made a call to "create two, three, many Vietnams", and how he attempted by all means to spread the revolution to other countries, finally paying with his life.

In the Revolution Betrayed, Trotsky outlines three possible perspectives for the USSR. One is the victory of the workers and the return to Lenin's regime of workers' democracy. The other is the victory of a bourgeois party, which would start the return to capitalism by de-nationalising the land and light industry. Finally, Trotsky warned that the continuation of the rule of the bureaucracy would lead to this bureaucracy attempting to transform itself from parasitical administrators of the means of production to owners of the same, which is precisely what happened in Russia after 1989/91. 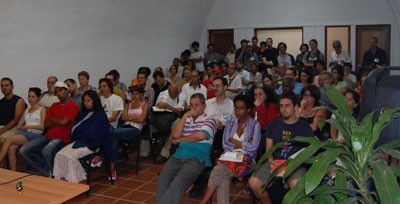 Jordi explained how the restoration of capitalism in the former USSR led an unprecedented collapse of the economy, living standards, life expectancy, art and culture, etc. He warned that the restoration of capitalism in Cuba would be even worse. He pointed to a certain naivety among layers of Cuban society about the introduction of the "market economy" and made an appeal to unconditionally defend the gains of the Cuban revolution, at which point the audience interrupted with applause.

Moving on to the presentation of the theoretical magazine on China, Jordi outlined the process of capitalist restoration which has taken place, led and controlled by the bureaucracy of the Chinese Communist Party, backing it up with many of the facts and figures which can be found in the IMT document. Although no one can deny that there has been significant economic growth, this has taken place at the cost of an enormous intensification of the exploitation of the Chinese working class, the emergence of enormous regional imbalances, the concentration of wealth at one end of society and of poverty at the other, with 300 million unemployed, etc. Far from being socialism of any kind (not even "market socialism with Chinese characteristics"), what we are witnessing in China is the emergence of a particularly brutal kind of capitalism. 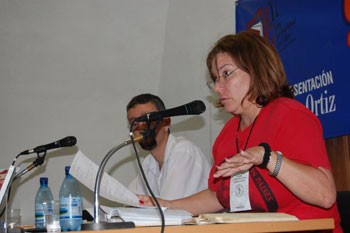 The fact that China trades with Cuba and Venezuela does not determine at all the character of the mode of production in that country. These trade relations, necessary and justified as they may be, take place on market terms. Where are the Chinese doctors in the hills of Caracas or in the mountains of Kashmir?

The positive side of this process has been the development of the largest working class in the world, which is starting to acquire a consciousness of its interests and which, without doubt, will play a revolutionary role with consequences throughout the world. As the document explains, the perspectives for China, which to a large extent depends on the US market which is already in crisis, are of sustained growth, but of a crisis of overproduction and enormous social and political convulsions.

The discussion on China is also important because it has been presented by some as the model that the Venezuelan revolution should follow, arguing that if in China they are "going back to the market", then in Venezuela there is no need to expropriate the means of production.. 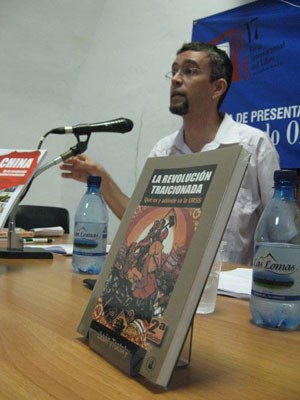 Jordi finished by announcing the forthcoming publication of Alan Woods' "Marxism and Socialism of the 21st Century - Anti-Dieterich", which demolishes the theses of Heinz Dieterich, who by arguing that there is no need to nationalise the economy provides a "theoretical" cover for the reformists in Venezuela.

Cuban Communist journalist and writer Celia Hart, also participated in the launch of Revolution Betrayed. Celia explained the enormous impact the reading of this book had on her, when she first managed to get hold of a copy of the same edition that the Frederick Engels Foundation was now launching in Cuba. She praised both Estaban Volkov's foreword and Alan Woods' introduction to it, which she recommended to all those present.

As Jordi explained in introducing her, Celia was the person who insisted that the FFE should be present at the Havana Book Fair, in order to spread the works of Trotsky among others, and therefore the credit for such an historic event was also hers.

Celia stressed that the economic policy of Stalinism followed a series of zig-zags, and how it was the failure of the right-wing policy of concessions to the kulaks and other capitalist elements that forced it to adopt the programme of collectivisation and industrialisation that the Left Opposition had advocated, albeit in a bureaucratic and brutally distorted manner. 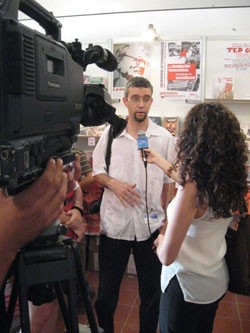 Regarding the NEP, she insisted that this was a policy of necessary concessions but that it had always been conceived by Lenin as something strictly limited in time and to be kept under control, not a virtue in itself. In her opinion, of all the crimes of Stalinism, the worst was the policy of "socialism in one country".

She also underlined the parallels between the ideas of Trotsky and those that Che Guevera elaborated in his recently published "Critical Notes on the USSR's Manual of Political Economy", in which Che denounced the foreign policies of both the USSR and China towards the revolutionary struggle of the Third World countries, and warned of the danger of capitalist restoration.

Finally Celia proposed that the FFE should give a copy of the Revolution Betrayed to Fidel Castro and appealed to all those present to study in depth and discuss the book.

At the end of the event both titles were sold in Cuban pesos and were taken up enthusiastically by the audience.