Details
In Defence of Marxism
08 February 2006

Share
Tweet
Yesterday the Cuban edition of Reason in Revolt was launched at the Havana Book Fair with Alan Woods and Adan Chavez speaking. A common thread in the discussion was that there was an urgent need for such a book, which demonstrates the validity of dialectical materialism and how it can be applied to all spheres of life, in particular scientific study. The publication of the book in Cuba is a tremendous achievement and hopefully more such publications will be forthcoming in the near future. 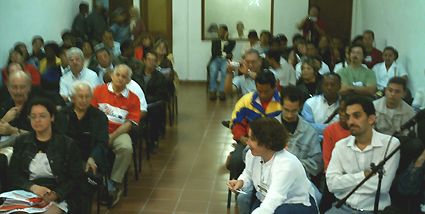 More than 75 people packed the Fernando Ortiz meeting room at the 15th Havana International Book Fair for the launch of the first Cuban edition of Reason in Revolt yesterday, February 8. More would have attended if it had not been because the room was already full with people standing at the back. The book has been published by Ciencias Sociales and 2,000 copies have been printed in time to be sold at the Book Fair.

The book launch meeting was introduced by Hiram Hernandez, who has been crucial in getting the book published in Cuba as part of the Ciencias Sociales publishing house. After thanking the Spanish Marxist publishing house F Engels Foundation and the book authors Alan Woods and Ted Grant for donating all authors’ and translator’s rights so that the book would be available to the Cuban public he introduced Venezuelan ambassador to Cuba, Adan Chavez who presented the book.

He started by saying that “for me it is a great honour and a commitment with Alan and with the comrades of the F Engels Foundation, to present this book here”. Adan Chavez is a committed revolutionary but also a physicist by profession as he himself explained. He told the audience how Reason in Revolt has become one of those books that are known in Venezuela as “Chavez’s books”, the books president Chavez mentions and recommends in his speeches and TV programmes. “In this book, comrades Alan and Ted show how dialectical materialism is a method which is very relevant today in order to know what has been, what is and what will happen, and I would strongly recommend it to all”.

He then praised the chapter on physics in the book, which he said “is really fabulous” and proved how “in order to understand the development of science, and the laws of nature, one must have a non-linear way of thinking, apply a comprehensive non-dogmatic and non-deterministic method, which at the end of the day is what dialectical materialism is”. He added that this could be extended to all fields of science. “Each day that goes by, the need to apply dialectical materialism, in all fields of science, is proven more emphatically”, he said. 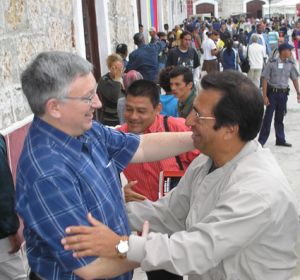 Adan Chavez also said that in “the same way that those who thought Newtonian mechanics explained all were mistaken, one can also prove using a scientific method, that those who after the fall of the Soviet Union talked about the end of socialism, the end of Communism and the end of history [were also wrong]”.

After Adan’s intervention which was received enthusiastically by the audience, Alan Woods, one of the authors of the work, explained how the book was a modest attempt to bring Engels’ Dialectics of Nature up to date, in order to disprove those who said that Engels’ hypotheses were old science or had become a relic. He gave a number of examples (punctuated equilibrium in evolution, Gibbs energy in chemistry and volcanic eruptions) to demonstrate that nature operates in a dialectical way, far from the Newtonian conception of movement coming from external forces.

He said that when he started work on the book he was convinced that dialectics were corroborated by modern science but that he never thought that this could even be expressed in a mathematical formula, as was the case with the power law of ubiquity. Ubiquity, he explained, “is a new development of chaos theory, and can be applied to a wide range of phenomena, from stock exchange crashes, to forest fires, and from avalanches to cardiac arrests”. 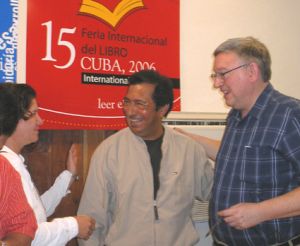 Alan Woods also made another important point about the fact that the crisis in science was at bottom a manifestation of the general crisis in society, culture and politics which flowed from the crisis of capitalism. “In the first decade of the 21st century, with the current development of science and technology, there is no justification why 8 million people a year should be dying of starvation”. But he added that “it is not enough to point out the symptoms, as has been done in other meetings here this week, but it is necessary to identify the cause and offer a cure”. “One would be a very bad doctor if one were to point out the symptoms to a patient and then cry and lament over those, as reformists and pacifists do”. The root cause of these problems is the crisis of the capitalist system and the solution is the struggle for socialism, Alan said.

This revolutionary struggle, he pointed out, is more advanced in Latin America, but is part of the same process of general strikes and intensification of the class struggle that is taking place in Europe. What is needed is the “building of a revolutionary leadership”, and for this we must use the ideas of Marxism, which are “today more relevant than ever”. “There is no need to reinvent the wheel, as many academics and intellectuals try to do. The wheel has already been invented and it works well as it is, so why try to invent a triangular or squared one which will not work”. Once again, the audience received Alan’s words with an ovation and there was a mood of genuine enthusiasm. 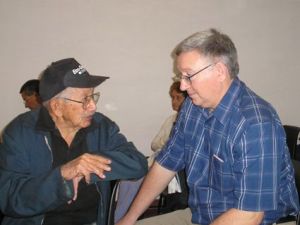 A representative of the F Engels Foundation explained how pleased they were to be able to launch Reason in Revolt in Cuba and he added that they were putting the authors’ and other rights they had at the disposal of Ciencias Sociales for future publication of other titles. He also recommended the Foundation’s other two recent books, Alan Woods’ “Venezuelan Revolution – a Marxist analysis” and the collection of Celia Hart’s articles “Revolutionary Notebook”. Celia Hart, who is also a physicist and who presented Reason in Revolt at the Book Fair last year, before the Cuban edition had been published, was also in the audience.

A representative of Editorial Cientifico-Técnica, the twin publishing house of Ciencias Sociales, and also a physicist explained how necessary a book of this character was. He said there was a vacuum of Marxist books dealing with science and how those attempts that had been made in the USSR after the death of Lenin, had been tainted with the stultifying and bureaucratic nature of Stalinism and how far from offering some guidance had been a hindrance to the development of a progressive philosophical outlook on science.

Also present in the audience were Ydalberto and Juan Leon Ferrera, two veteran Cuban revolutionaries and Trotskyist militants who had participated actively in the revolutionary war and worked closely with Che Guevara in the Ministry of Industry.

This was without doubt, one of the meetings with the highest political content in the book fair, and the audience was thrilled.